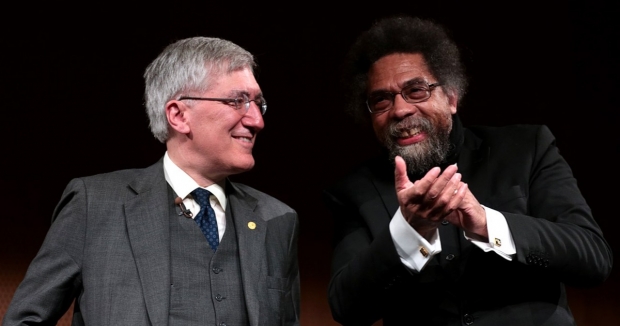 Cornel West and Robert P. George are unlikely friends, but they are so close they call each other “brother” and regularly talk about friendship and faith across political differences.

West, a Democratic Socialist, public intellectual and self-described “revolutionary Christian,” and George, a leading conservative legal scholar and Roman Catholic, show a commitment to promote much needed civil dialogue with respect and integrity at the core of their friendship.

West is Harvard University’s Professor of Public Philosophy. George is the McCormick Professor of Jurisprudence and Director of the James Madison Program in American Ideals and Institutions at Princeton University.

What is noticeable about the two is that there is a respect characterized by their affectionate words, as well as body language. They speak as friends. What enabled them to get to know each other is that they have jointly taught courses. Teaching together and discussing topics deeply with each other helped cultivate an authentic friendship.

On a late 2020 episode of Firing Line, West explained their deep friendship:

"In fact, I think it’s deeper than civility and it’s even deeper than respect. I think we’ve got a genuine love for one another. I love this brother. I revel in his humanity. We spend good time together. And so we just always want to send a sign to the nation that deep down in your heart, you know love is not reducible to politics."

George responded with his own strong praise and love for West:

Well, I not only love Brother Cornel, I admire him and I admire him for those virtues — for honesty and for integrity. And he sets an example for me. He’s inspiring to me. We may disagree about politics, but I do admire integrity, a person who says what he means, means what he says, who does not succumb to peer-group pressure. Cornel’s been under pressure from the Progressive side, sometimes, to do things or say things that he actually doesn’t agree with, and he refuses to yield. I try to do that on my end, and I look to him as a model for that.

While their politics are different, they can identify numerous similarities in terms of their background, their view of friendship, and even their politics.

Some of the political issues on which they agree are preserving the private sector input in matters that concern citizens; protecting rights and liberties; and public regulation of the market. They are also both devout Christians and prominent professors.

West supported Bernie Sanders. "I always look for a candidate who exemplifies integrity, honesty, decency, constancy, as Jane Austen would put it, a moral consistency. And Brother Bernie has been that."

Although Robert George disagreed politically with Bernie Sanders’s candidacy, he wrote in a February 8, 2020 tweet, "Sanders shows his superiority to his competitors in terms of honesty and forthrightness... a man of principle."

Finally, they have similar views toward friendship. During their joint 2019 Kenan Distinguished Lecture in Ethics at Duke University, George called friendship "fundamentally volitional. It is willing the good of the other for the sake of the other. … Where we fail is when we lose track of the other person’s humanity."

George emphasized embracing a shared “thin line of understanding or common ground” and an openness to ideas and opinions that challenge our own.