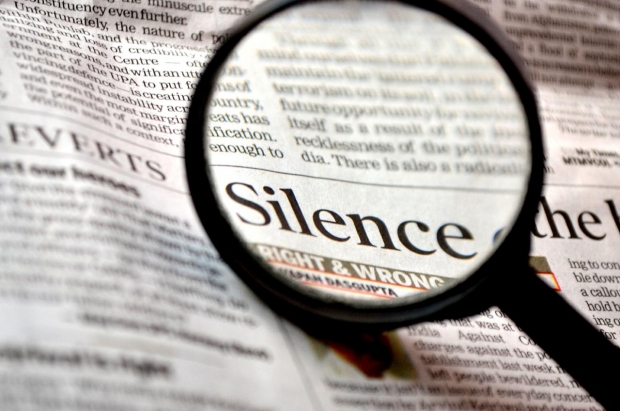 Generally, you shouldn’t be able to tell who journalists are voting for in the 2020 presidential election when you read their news story or look at their website. But sometimes it can be more than obvious, even when it comes to the almighty fact checkers.

We went around to six fact-checking operations on websites for which we have AllSides Media Bias Ratings — CNN (Lean Left), USA TODAY (Center), The Dispatch (Lean Right), Washington Post (Lean Left), Factcheck.org (Center) and Breitbart (Right) — and compared what they were focusing on last Thursday evening before the final presidential debate.

Some of the results might surprise you. Others probably won’t. Either way, they provide a look at how individual newsrooms, with the various ideological biases that may be vying for influence within them, potentially choose what news to cover. 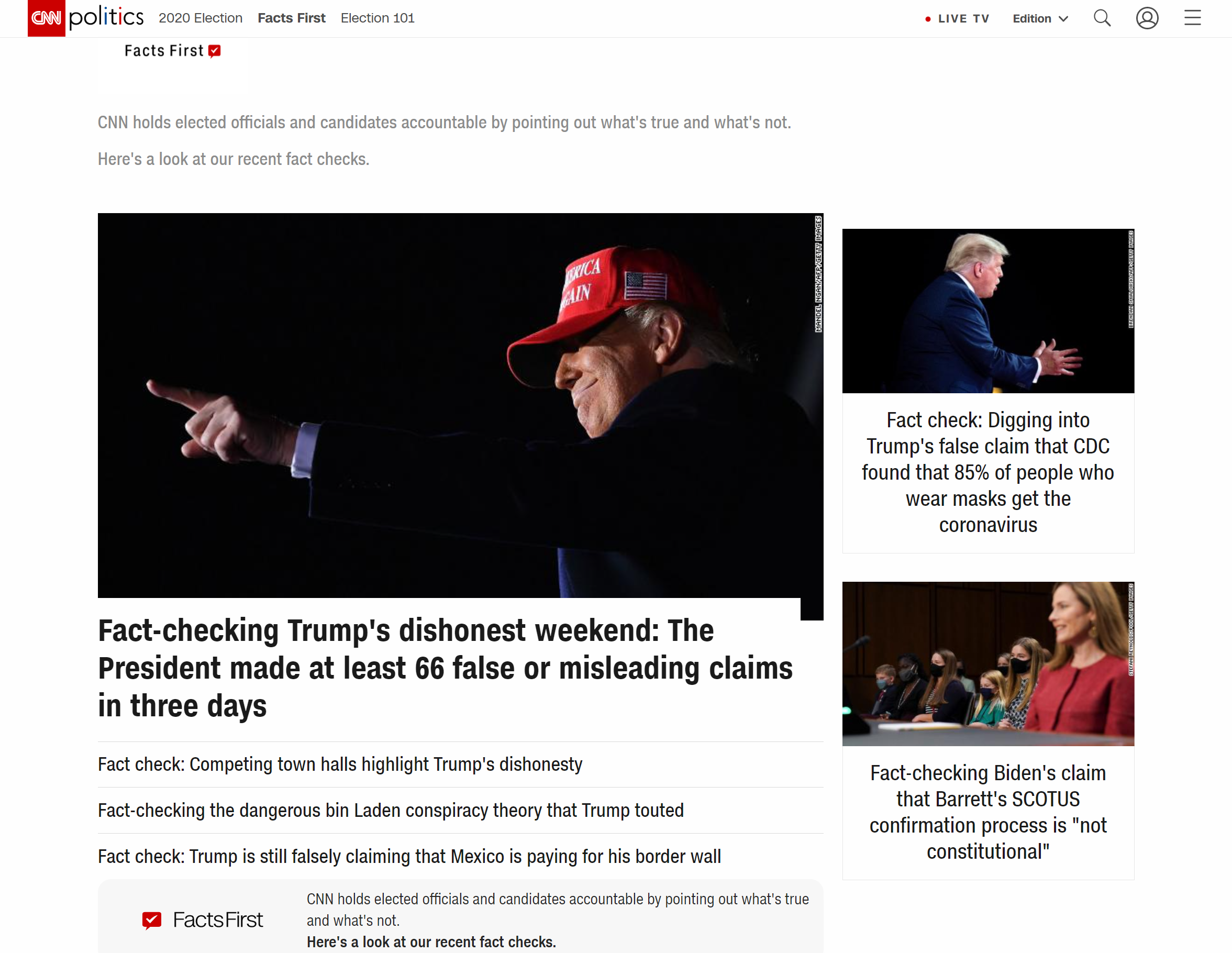 The Washington Post’s Fact Checker featured three stories atop its homepage, two of which focused exclusively on Trump — “Trump is averaging more than 50 false or misleading claims a day,” and “The Trump campaign’s bogus claims of a Biden ‘tax hike’ on the middle class”: 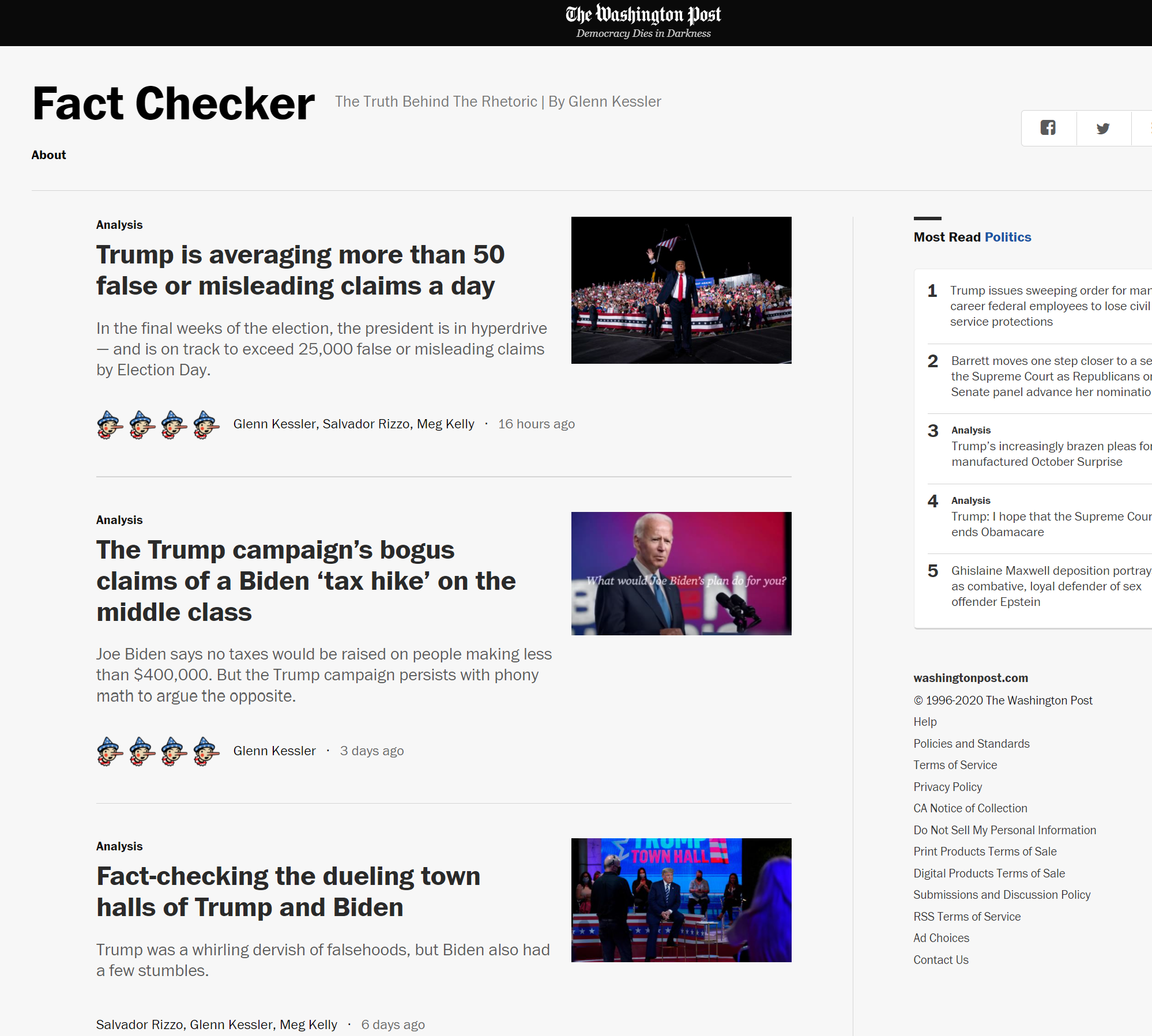 Center-Rated Outlets: Both Candidates, but More Focus on Right-Leaning Claims

Factcheck.org’s homepage prominently featured side-by-side pieces on Trump and Biden, as well as a few additional fact checks focused on the president, such as “Trump’s Numbers, Preelection Update.” There’s also a mini fact check of a Kamala Harris claim in the top right corner: 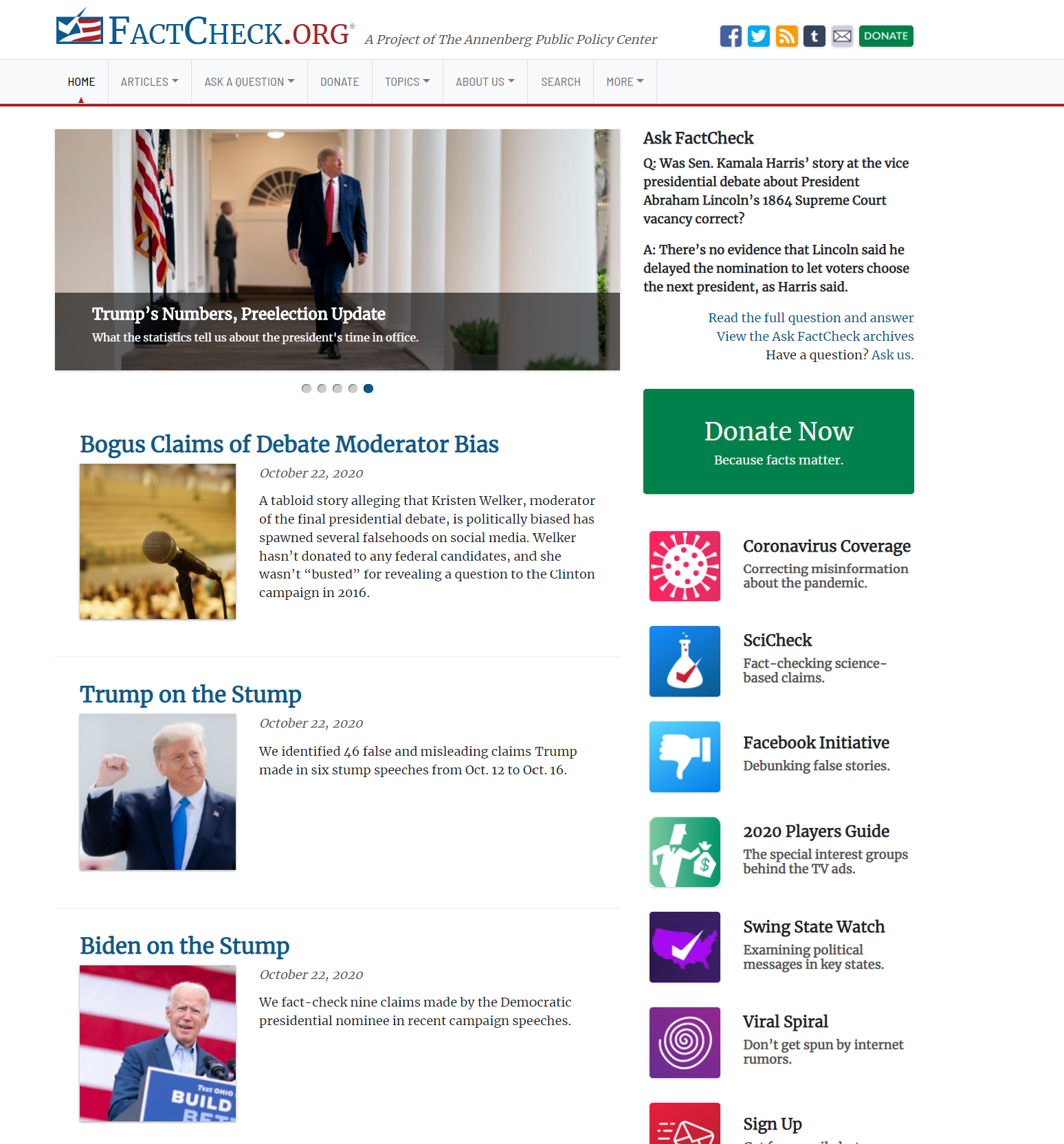 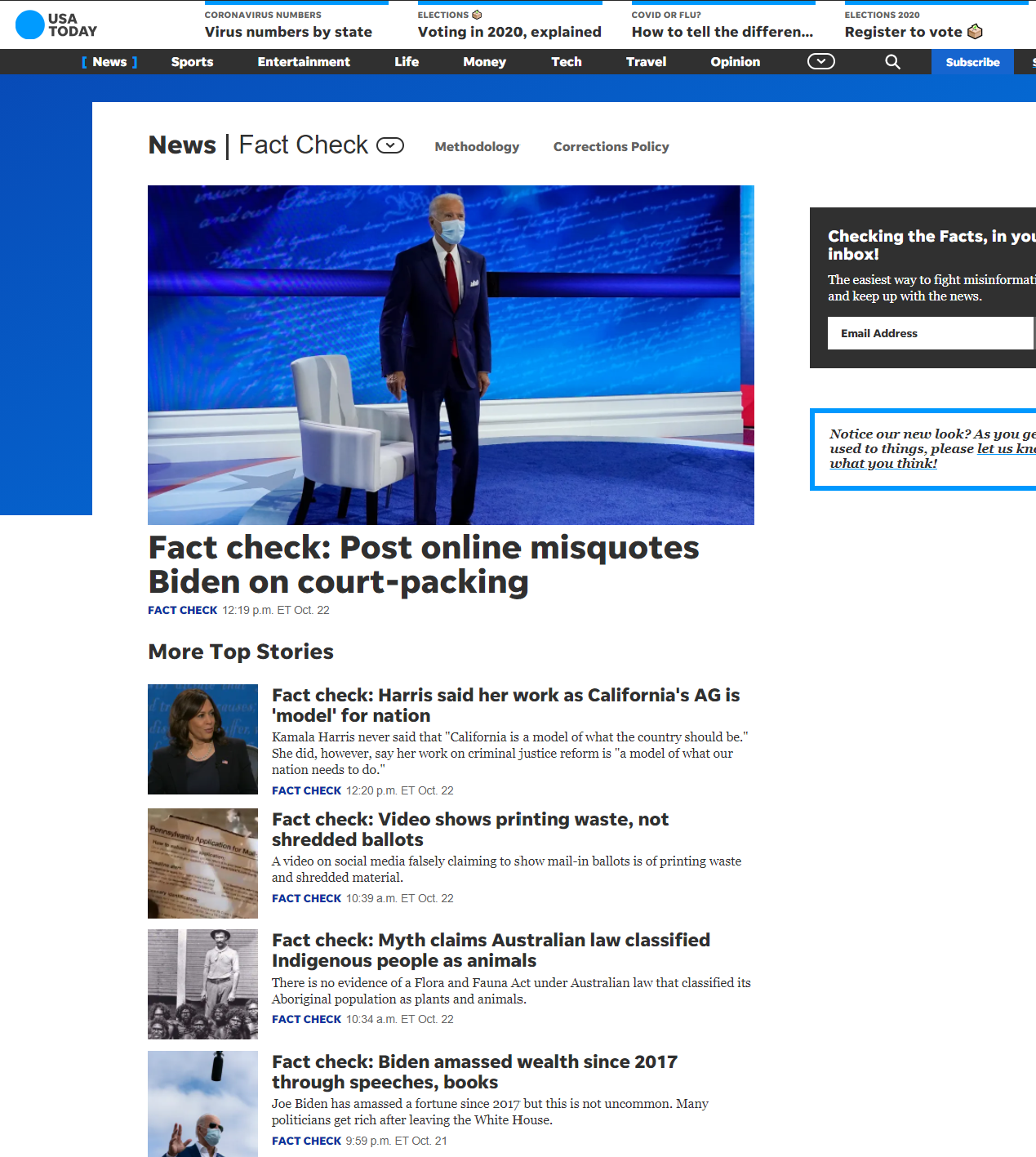 The Dispatch’s homepage featured a fact-check of Biden at the top — “Did the Trump Administration eliminate funding for community policing?” — followed by a look at exaggerated claims of voter fraud, and a look at whether Bill Gates tested vaccines on African children: 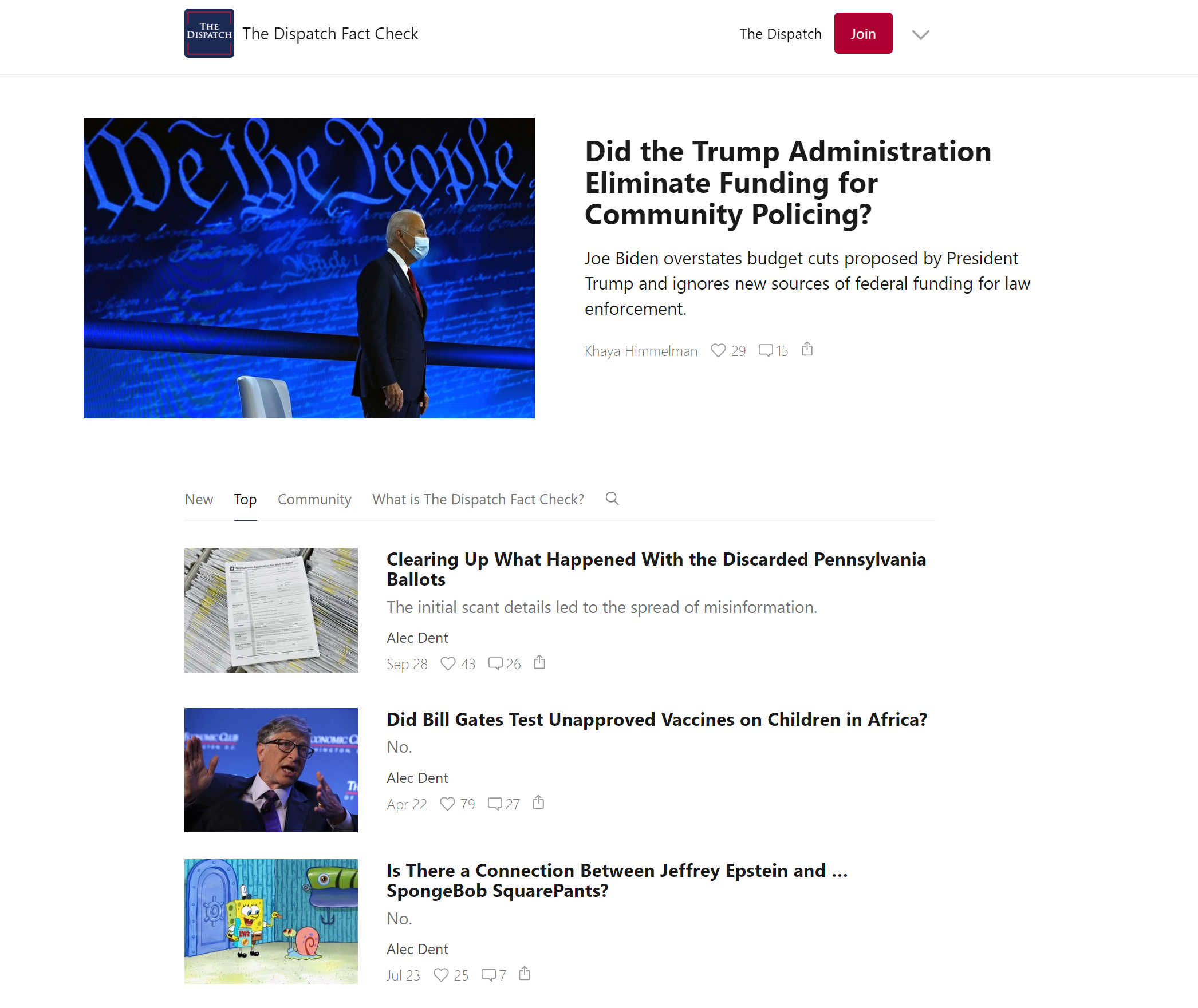 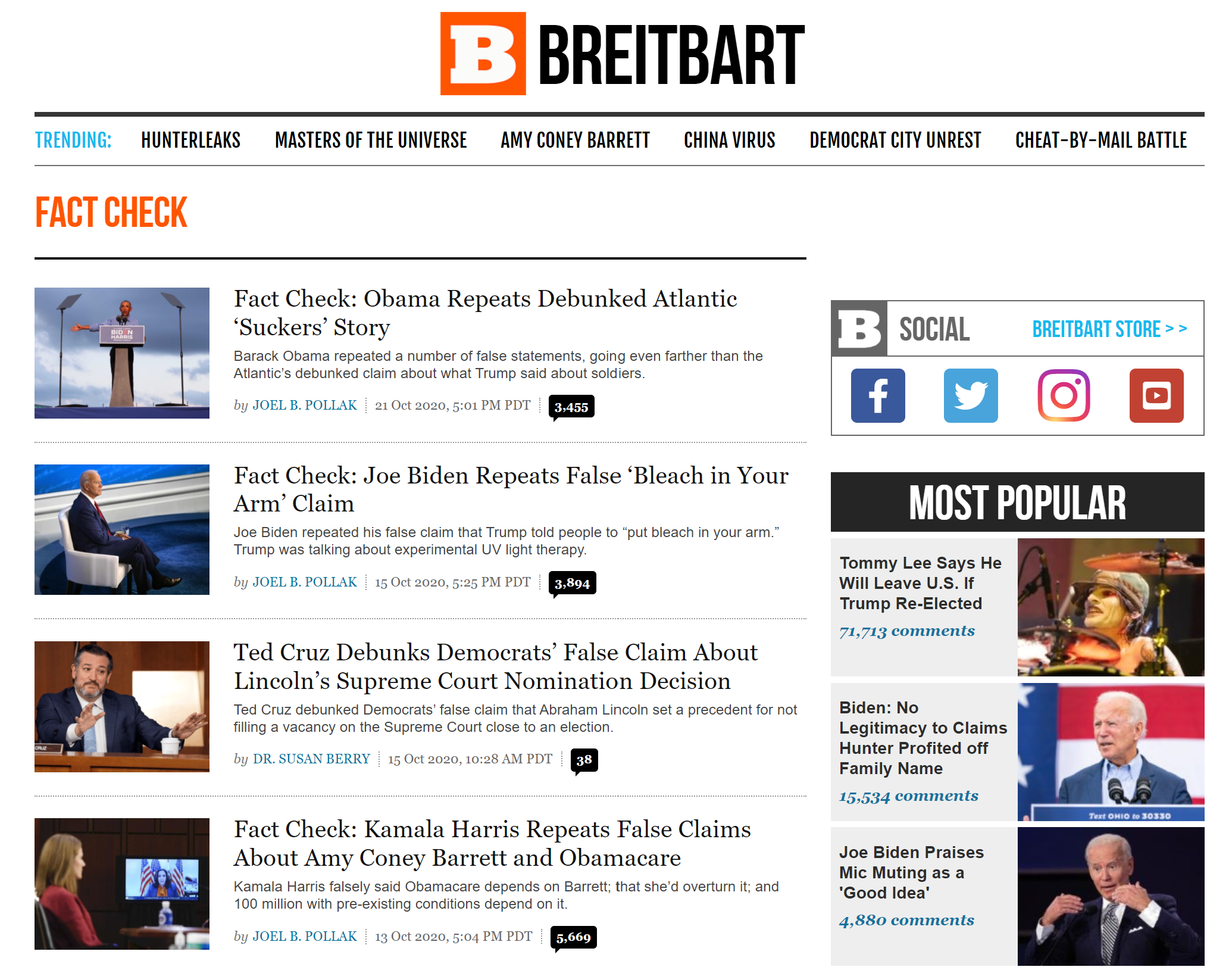 It’s important to note a few possible reasons for the disparities on each side, other than outright media bias and favor for one political cause over another.

Maybe there’s truly more lying to cover on one side than the other. Trump might tell more lies than Biden, or Biden may lie more than Trump; the Washington Post reported the president has been lying or misleading roughly 50 times a day. Trump’s campaign, meanwhile, accused Biden of stating 33 falsehoods during their debate in September.

Journalists may simply be making a decision that Trump’s lies are more important than Biden’s, or that Biden’s falsities are more significant than Trump’s. This sort of subjectivity doesn’t necessarily represent political bias. As part of our job, journalists must frequently choose what we feel is most relevant to our audience. And yes, it’s okay to disagree with us (and illustrates why reading multiple news sites and getting diverse perspectives is crucial).

What’s also entirely possible, and perhaps more likely, is that these individual fact-checkers and their editors are caught in their own filter bubbles. They get home after a long day of fact-checking; they read one side of the media and not the other; they see one presidential candidate lying; and they go on to do their job the next day thinking they’ve got the whole picture, and that they’re giving their audience the full story.

Many people, including journalists and fact checkers themselves, aren’t seeing all sides of the news about the presidential election and candidates. Fact check: True!

This is why it’s so important to assess bias among fact checkers and to get fact checks across the spectrum, which we provide on our 2020 elections fact checking page. And for more diverse news and perspectives on the election and everything else, always refer to our balanced newsfeed.