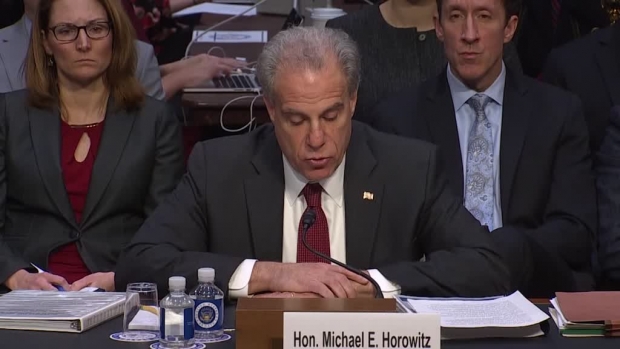 Horowitz's report concluded that no one was vindicated; he found that the FBI investigation was not necessarily biased, but also featured significant procedural errors. After the six-hour hearing, Democrats seemingly accepted Horowitz's failure to find bias as reason to move on; Republicans focused on the report's conclusion that the Democrat-backed dossier of former British spy Christopher Steele prompted the original investigation.

Nearly all media coverage, regardless of political leaning, painted the news as bad for the FBI. Some voices on the left criticized Trump for appearing to exaggerate "witch hunt" claims; some right-leaning voices criticized the media for purportedly over-blowing allegations of Trump's wrongdoing.

Check out some other big stories this week: House Dems, White House clear path to pass USMCA; U.S. government misled public about war in Afghanistan; and Pensacola Naval base shooting under investigation after four killed.

How AllSides Labels Content: It's getting harder to tell the difference between news and opinion in today's media landscape. That's why AllSides created a system to let readers know exactly what kind of content they're clicking on.

"Under questioning from Committee Chairman Sen. Lindsey Graham, R-S.C., Horowitz discussed a litany of embarrassing slip-ups by the FBI, including the actions of a lawyer who the inspector general said "doctored" an email to make it seem like Page was not a CIA source, when in fact he was. That potentially exculpatory information was never shared with the Foreign Intelligence Surveillance Court, which approved the surveillance warrant."

Horowitz pushes back at Barr over basis for Trump-Russia probe

"The lawmakers’ assessments broke sharply along party lines, with Democrats stressing how they saw the report as refuting Trump’s frequent claims he was the focus of a “witch hunt” and Republicans insisting that the repeated foul-ups Horowitz found in the surveillance application process were staggering and deeply disturbing."

"The whole thing would seem to be a major shot in the arm for President Trump’s claims of misconduct by law enforcement — if only he hadn’t spent two-plus years speculating wildly about things significantly worse than what Horowitz actually found."

"Horowitz’s report and testimony provided a number of rebukes to various conspiracy theories lodged by Trump. Chief among them is that the whole thing was a “witch hunt.” Horowitz found that the Russia investigation was warranted; he also found no “evidence that political bias or improper motivation influenced the decisions” to open the Russia probe and four cases into Trump campaign aides."

"The "Tucker Carlson Tonight" host said many network hosts, contributors and guests had tried to convince viewers the Steele dossier was "totally irrelevant" to the FISA warrant application. He criticized CNN primetime anchor Don Lemon, who had accused the Trump administration of "gaslighting" the American people in response to both President Trump's impeachment proceedings and the Horowtiz report."

"Carlson also singled out CNN anchor and former Obama administration staffer Jim Scuitto -- who in a 2018 tweet claimed the FBI would "further corroborate information in the [Steele] dossier... before using such intel to justify the FISA warrant.""

"While acknowledging no documentary bias, Horowitz criticized the FBI leadership for its actions during the investigation. Much of the IG report details how Comey, Baker, McCabe, and others relied heavily on the dossier compiled by former British spy Christopher Steele to obtain the FISA warrant without informing the court of the dossier’s origins or verifying its information."

"Horowitz also said his team was “deeply concerned” over the “many basic and fundamental” mistakes made during the investigation."

"The IG report is a wakeup call: for Republicans who foolishly claimed the FBI's secretive spying process was necessary and unthreatening, for anti-Trump media pundits who uncritically parroted the talking points of top officials, and for any Americans who still think it is worth trading away their liberties. If government agents were this sloppy during a politically charged investigation that they knew would put their entire apparatus under the spotlight, it's safe to assume their normal conduct is even worse."

DOJ Inspector General tells Congress his report does not 'vindicate anybody'

"The report found that the bureau's decision to open an investigation "was in compliance with Department and FBI policies, and we did not find documentary or testimonial evidence that political bias or improper motivation influenced" the decision."

Watchdog caught in political crossfire on his Russia report

"The Justice Department’s internal watchdog was caught in a political tug of war Wednesday as Republican and Democratic senators used his report on the origins of the Russia investigation involving Donald Trump’s 2016 campaign to support their views that it was a legitimate probe or a badly bungled farce."

"The hearing was the latest reflection of Washington’s intense politicization. Senators from both parties praised a detailed, nuanced report by a widely respected, nonpartisan investigator, while pressing him to call attention to findings that back their positions."

"Horowitz was grilled for nearly six hours by lawmakers on the Senate Judiciary Committee, with Republicans and Democrats using their time to advance competing narratives about the FBI’s investigation into the Trump campaign and Russia."

"The watchdog chose his words carefully throughout Wednesday’s appearance. He tiptoed around some of the more politically charged questions from members, seeking to avoid wading into debates about whether the president’s campaign was “spied” on and declining to speculate on matters beyond his report."