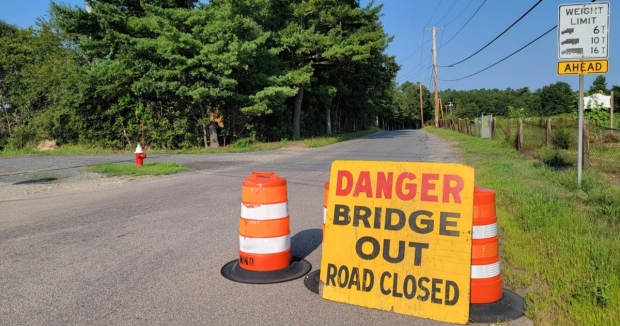 A bridge closure causes a detour in Raynham, Massachusetts.

If it becomes law, the $1.2 trillion infrastructure bill recently approved by the Senate will have a vast impact on virtually all American communities.

The bill’s key allocations are as follows: $550 billion for traditional infrastructure like roads and water supply networks; $105 billion for public transit and railways; $75 billion for clean energy initiatives; and $65 billion to expand and upgrade broadband Internet access.

Though some Republicans voted against it as being too expensive and thought it went beyond the traditional definition of infrastructure, it did pass with a 69-30 bipartisan vote, gaining support from Minority Leader Mitch McConnell and Trump supporters like Senator Lindsey Graham.

It’s not a lock to pass the House, though. Speaker Nancy Pelosi (D-Calif.) said she won’t approve it unless the Biden administration’s more-controversial $3.5 trillion budget plan passes along with it. But if the bill does become law, it will bring big changes to American infrastructure, social behaviors and quality of life.

Here are five reasons you should care about the infrastructure bill, regardless of your politics.

If you live in the U.S., it's almost certain that you use the same infrastructure as everyone else in the country. If an ultra-conservative and a mega-liberal live in the same neighborhood, they’ll probably agree that the potholes should be fixed and the water should be clean.

Other details of the bill, such as money for expanded Internet access and a call for all U.S.-sold cars to meet more advanced safety requirements, will also have nonpartisan benefits (though some car safety advocates say the bill appeases industry demands).

Whether some of these benefits are more expensive and less effective by being funded and run by the government rather than the free market is a key part of the debate. Though differences like this are often called partisan, they really speak to the different philosophies and opinions on the most effective way to reach the same goals.

It could shape the future of transportation in the U.S.

The bill’s focus on sustainable transportation for the common citizen signals a definitive turn away from gasoline and toward cleaner energy. Among the key non-traditional infrastructure sections of the bill are ones that focus on sustainability and clean energy, especially for cars and other vehicles. If passed, the bill would:

According to the Environmental Protection Agency, “a typical passenger vehicle emits about 4.6 metric tons of carbon dioxide per year.” Currently, electric vehicles make up fewer than 1% of the cars and trucks on U.S. roads, and 2% of the U.S.’s new-car market each year.

As the New York Times (Lean Left) reports, “If the United States wanted to move to a fully electric fleet by 2050 — to meet President Biden’s goal of net zero emissions — then sales of gasoline-powered vehicles would likely have to end altogether by around 2035, a heavy lift.”

It could help create hundreds of thousands of jobs

According to projections from economists and data analysts, the bill could create between 650,000 and 1 million jobs over the next few years. One analyst said up to 70% of the jobs could be filled by people who didn’t graduate college. Many of the jobs could disappear once larger infrastructure projects are completed, but hundreds of thousands of others, such as those for truck drivers or for equipment manufacturers — will likely last.

Fiscal conservatives might accuse these estimates of ignoring the bill’s potential long-term negative impacts on jobs and the economy. Some fear such big spending will have dire economic consequences for the next generation, as seen with the debt crisis that Greece and other European countries have recently experienced. Some would also argue that job creation is more efficient when left to private enterprise, rather than the government.

Meanwhile, Biden and other Democrats have gained the ire of fact-checkers for heavily exaggerating the bills’ job creation. Some experts also say labor shortages may negate the bill’s positive effects.

The bill includes $66 billion for Amtrak and $39 billion for public transit, $10.5 billion of which will go to New York’s Metropolitan Transportation Authority (MTA). In 2019, 84.8% of people in the U.S. used a car to get to work, compared to 5% who used public transit (including 2.5% who used a train). Meanwhile, the $105 billion in the bill for Amtrak and public transit nearly matches the $110 billion for roads, highways and bridges. According to the Washington Post (Lean Left),  “there is a line in the bill encouraging more food and beverage services on Amtrak routes, even if revenue does not break even.”

The bill also features new tax reporting rules for cryptocurrency transactions that many say is overly broad and “potentially unworkable.” According to CNBC (Center), the bill “could potentially target miners, developers, stakers and others who do not have customers and therefore wouldn’t have access to the information needed to comply.” Crypto experts and a bipartisan group of lawmakers agreed that the text should have been changed to avoid this potential snag, but no amendment was made.

Paying for the bill is another story, but one planned way to cover the cost might raise some eyebrows: roughly $200 billion of the bill’s value will be offset by unused COVID-19 relief funds, according to the Wall Street Journal (Center).

On one hand, this might seem like smart repurposing, but on the other, it doesn’t inspire much confidence in lawmakers’ ability to spend the country’s money responsibly. Still, congressional budget analysts say the bill will add $256 billion to the deficit in the next decade. (During the COVID-19 pandemic, the national debt grew by over $2 trillion.)

It shows common ground is alive, even if overlooked

After months of negotiations, the final bill costs roughly half of the Biden administration’s original $2.25 trillion proposal. And even with the halved price tag, all 50 Senate Democrats voted for it. The 19 GOP Senators who supported the bill also covered a lot of ground to meet Democrats in the middle, eventually settling for more than double the cost of their party’s original $568 billion proposal.

Pessimism about the bill and partisanship around it is valid but often overblown, especially by the media. Even if this exact bill doesn’t go through, some version of it eventually will. Infrastructure issues abound across the country and people are demanding change. Senators know that, and know staying in office means appeasing enough voters.

Expecting everyone to agree on how (or how much) to spend on infrastructure is a pipe dream — and worse, a potential sign of unhealthy democracy where debating differences is a good thing. We don’t need total harmony to make change happen. We just need enough.