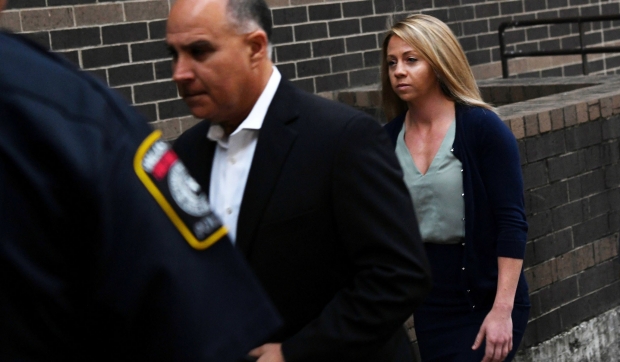 Tracking impeachment:Impeachment news is sure to dominate media coverage until further notice. But there are always other important stories to note, so we'll be providing weekly impeachment updates while also following other topics. This week, the House of Representatives threatened to subpoena the White House for information on the infamous Trump-Ukraine phone call from July 25.

Former Dallas police officer Amber Guyger was sentenced to 10 years in prison this week for the murder of 26-year old Botham Jean in his apartment last year. Guyger entered Jean's apartment thinking it was her own, and mistook him for an intruder.

The trial and verdict have commanded national attention. Many were critical of what they labeled a lenient sentence for a white officer who shot and killed an unarmed black man, and protests ensued outside the courthouse. Meanwhile, Jean's younger brother, as well as the judge, notably embraced Guyger following the sentencing.

Left-leaning media has been particularly critical of the 10-year sentence, framing the story as the latest example of deadly racial injustice with unfit consequences. Some on the right called the verdict a win in the fight against police privilege, while others argued for manslaughter as a more fitting charge. The post-sentencing courtroom hugs between Guyger and Jean's family got significant media attention.

We've updated several of our most prominent media bias ratings.Check out changes we made, things that remained the same, and as always, let us know what you think!

"Guyger, a four-year veteran of the Dallas Police Department, had been fired and charged with manslaughter after she entered Botham Jean's apartment on Sept. 6, 2018, thinking it was her own and shot him twice, killing him. She was indicted on a murder charge two months later."

"“[T]his judge choosing to hug this woman is unacceptable," Atlantic columnist Jemele Hill wrote on Twitter. “Keep in mind this convicted murderer is the same one who laughed about Martin Luther King Jr’s assassination, and killing ppl on sight.”"

Amber Guyger might be guilty of manslaughter, but not murder

"Much was made at the trial about how Guyger reacted in the immediate aftermath of her shooting of Jean, who was by all accounts a kind and affable immigrant from Saint Lucia. Appropriately dialing 911 and requesting medical assistance, she then wasted precious minutes before administering potentially lifesaving CPR and first aid, which she abandoned while directing additional first responders to the scene."

"Murder charges require malice as a condition. It's difficult to sense malice in this case, though her arguably conscious disregard for human life seemed to have met the conditions for a lesser manslaughter charge."

With the Guyger verdict, a Texas jury chips away at the unwritten law that helps bad cops go free

"The jury’s verdict is significant — and not just because justice was done in this dreadful case. It’s a small data point that some juries in some jurisdictions may well be rejecting a classic police defense that’s been used to help bad officers escape accountability for unjustified shootings. In jurisdiction after jurisdiction, the written law requires officers to show that they used deadly force based on a “reasonable” belief that the suspect presented a risk of inflicting deadly force or serious bodily harm. Yet in jurisdiction after jurisdiction, juries have followed a different, unwritten code — that virtually any expression of fear by a cop justifies a shooting. As I’ve argued before, clever defense lawyers twist the legal standard into a line of argument that goes something like this: The officer was afraid, and she can explain to you the reasons why she was afraid. Therefore, it was reasonable that she was afraid."

""If you truly are sorry," Botham's 18-year-old brother, Brandt Jean, told Guyger from the witness stand before walking down and embracing her, "I know I can speak for myself, I forgive you.""

"Guyger, 31, was off-duty but still in uniform the night she killed Jean at the South Side Flats apartments just blocks from police headquarters. She said she mistook his apartment for hers and thought he was a burglar. After a day of testimony focused on how long Guyger would spend in prison, Jean's 18-year-old brother said in his victim-impact statement that he wished she didn't have to serve any time at all."

Amber Guyger, ex-officer who killed man in his apartment, given 10 years in prison

"Guyger, who is white, fatally shot 26-year-old Botham Jean, an accountant from the Caribbean island of St. Lucia, who was watching television and eating a bowl of ice cream last year when Guyger fired two shots, striking him once in the chest."

"Allison Jean, Botham Jean's mother, testified that her son, the middle child, was "the glue" that united her three children. He excelled at math, was a dedicated Christian and loved rugby and choir singing. Friends and family called him "Bo." He was killed a few days before his 27th birthday."

"Dozens of protesters marched through parts of downtown Dallas to protest the 10-year sentence given to a white former police officer convicted of murder in the shooting death of her black neighbor."

"About 30 protesters chanted “No justice, no peace; no racist police” and “Amber alert!” as they marched through the streets surrounded by up to a dozen police officers, some in riot gear. Around 20 other demonstrators remained outside the courts building and jail."

"In an interview with CBS News' Omar Villafranca, the victim's mother, Allison Jean, said she was surprised by the moment her 18-year-old son Brandt offered forgiveness to his brother's killer. "What he did today, was remarkable, and he did it all on his own," she said. "What Brandt did was to cleanse his heart towards Amber … I do not want it to be misconstrued as a complete forgiveness of everybody.""

"Guyger was sentenced to 10 years in prison for murdering Jean, though she could have received up to 99 years. She will be eligible for parole after five years. People angry over what they describe as a lenient sentence took to the streets to protest overnight. Allison Jean said that a murder conviction "is justice" but that "there is a lot that has to be done by the Dallas Police Department, by the Texas Rangers, by the city of Dallas.""

"After a jury convicted Amber Guyger, 31, of murder on Tuesday, prosecutors introduced text messages sent by the former officer that show her making offensive statements. In the texts, Guyger jokes about Martin Luther King Jr.’s death, mocks her black colleagues and discusses a dog that her friend warns “may be racist.”"

"Prosecutors also showed images of Pinterest posts about guns and violence that Guyger had saved and commented on. One post showed a photo of a “Minion” character from the “Despicable Me” movies with the caption: “People are so ungrateful. No one ever thanks me for having the patience not to kill them.” Guyger commented about owning a gun on another meme that read, “I wear all black to remind you not to mess with me because I’m already dressed for your funeral.”"

Not even the police union could save Amber Guyger

"This week, a Dallas jury convicted Amber Guyger of murder. On Wednesday, she was sentenced to ten years in prison, eligible for parole in five. While the sentence is conspicuously short, she now joins a very small but growing number of law enforcement officers who have faced any criminal charges for shooting and killing a civilian. Some racial justice advocates and legal experts hope Guyger’s conviction could signal a shift in how the police are policed."

"Law enforcement officers in the United States killed more than 1100 people in 2018, according to the Mapping Police Violence Project. 25 percent of those killed were black, despite black people making up only 13 percent of the population. Unlike the murder of Botham Jean, many of these victims’ stories will never be heard by a jury at trial."