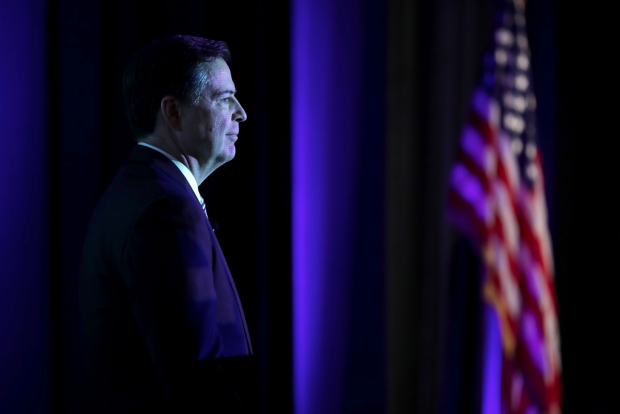 President Trump made the shocking move this week to fire FBI Director James Comey. Trump has stated that he terminated Comey due to his mishandling of the Hillary Clinton email scandal, but many in the media (and Congress) are hypothesizing it has more to do with the FBI's investigation into the Trump campaign's possible ties to Russia. Since Tuesday, there have been bipartisan calls for a special prosecutor to look into the whole ordeal.
See other news featured by AllSides such as Challenges for Emmanuel Macron, Sally Yates Testifies, Call for a Special Prosecutor and the latest AllSides News.
Snippets from the Center
Trump Says He Planned To Fire 'Grandstander' Comey 'Regardless Of Recommendation'
NPR
"Undermining the prior rationale laid out by the White House, President Trump said he fired James Comey as FBI director without regard to the Justice Department's recommendation.
'Regardless of recommendation, I was going to fire Comey,' Trump told NBC's Lester Holt in his widest-ranging remarks about his firing of Comey.
...
Raising more ethical questions, Trump admitted that he called Comey to find out whether he was under FBI investigation.
'If it's possible, will you let me know, am I under investigation?' Trump told Holt he asked Comey.
That's a remarkable admission, given the delineation most presidents and FBI directors are careful to try to draw. They don't want even the appearance of collusion or interference in what are supposed to be independent investigations, especially ones that might be related to themselves."
Snippets from the Left
Democrats Aghast at Comey’s Firing, Despite Anger Toward Him
New York Times
"What outraged Democrats about James B. Comey last year — namely, his decision to disclose the conclusions of an F.B.I. investigation into Hillary Clinton’s private email server and then revisit it days before the presidential election — now pales in comparison to their aghast fury at his firing this week.
To President Trump, they are 'phony hypocrites.'
...
Perhaps as much as anything, this is a sign of just how complicated a role Mr. Comey has come to play in American politics. It was Mr. Trump, after all, who praised him in the campaign’s final days for his 'guts' in pursuing Mrs. Clinton, whose loss Democrats pinned in part on Mr. Comey’s public statements about the F.B.I. investigation. Yet on Tuesday, Mr. Trump said those same decisions had cost Mr. Comey his job."
Snippets from the Right
McCabe contradicts White House: Comey had ‘broad support within the FBI’
Washington Times
"Acting FBI Director Andrew McCabe robustly defended his former boss before the Senate Intelligence Committee Thursday, rebutting charges from the White House that agents from the nation’s leading law enforcement agency had lost faith in James B. Comey.
Speaking at a hearing on worldwide threats, Mr. McCabe directly addressed the unfolding saga involving President Trump’s abrupt Tuesday dismissal of the FBI director, a firing that left Washington reeling.
'Director Comey enjoyed broad support within the FBI and still does to this day,' Mr. McCabe said, adding that 'the vast majority of FBI employees enjoyed a deep and positive connection to (him).'
Mr. Trump had cited Mr. Comey’s tarnished image within the agency as a major reason for his dismissal.”
Discover more on this topic on AllSides.
News, James Comey, FBI, Story Of The Week, Donald Trump