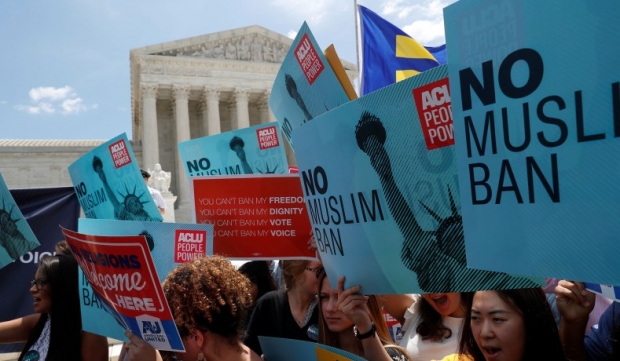 The Supreme Court on Tuesday issued a 5-4 decision upholding President Trump's travel ban. What exactly does that mean?

Partisan news organizations and politicians had vastly different reactions to the news, leading to a varied understanding of the ruling's ramifications.

Claim: The decision bans all Muslims from entering the country.

Rep. Keith Ellison tweeted that the ban was a "total and complete shutdown" on Muslims entering the country. Although Ellison was referencing President Trump's campaign promise to block Muslims from coming to the U.S., the travel ban itself doesn't go that far. CNN (Lean Left) and FactCheck.org (Center) partnered to refute the false assertion, highlighting that the newest iteration of the travel ban only targets 7 countries--2 of which are not Muslim majority--and would affect about 1 in 8 Muslims around the world.

The decision was an evaluation of executive authority--not an assessment of the morality of President Trump's immigration policy.

Salon, a left-leaning publication, writes that the ruling "pretty much gave the president a blank check when it comes to dealing with foreigners. He has a free hand now and will no doubt waste little time in implementing his most oppressive anti-immigrant policies."

While the above claim correctly points to the heart of the ruling -- executive authority of the president -- the conservative National Review paints a less dire picture, referencing current law that already allows the president to set such retrictions.

"Aliens have no constitutional right to enter the United States and, as the Court’s majority observed, the admission and exclusion of foreign nationals is a 'fundamental sovereign attribute exercised by the Government’s political departments largely immune from judicial control,'" writes the Editorial Board, pointing to the majority opinion. "In that connection, Congress has enacted section 1182(f) of federal immigration law (Title 8 of the U.S. Code), which vests broad authority in the president to suspend the entry of classes of aliens — which includes setting conditions and time-frames on such suspensions — if the president unilaterally concludes that their admission '"would be detrimental to the interests of the United States.'"

Have something you want fact checked? Email billy@allsides.com.