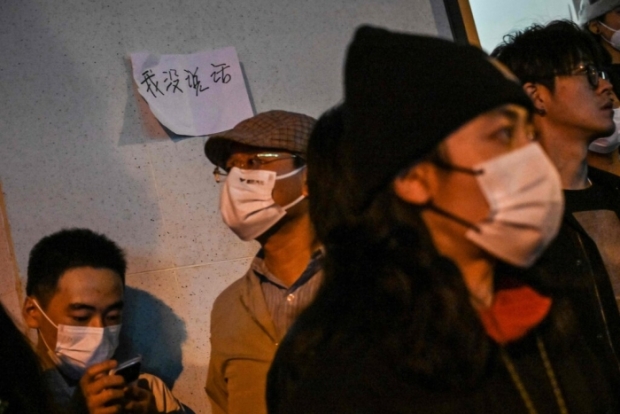 A rare wave of protests across China against the government's COVID-19 lockdowns earned support from the U.S. and other nations, while fueling violent crackdowns from the ruling Chinese Communist Party (CCP).

China recently returned to some of its "zero-COVID" policies, including strict lockdowns and quarantines, as the country battled another spike in COVID-19 infections. And after an apartment fire killed at least 10 people in Xinjiang and sparked questions of a potential death toll cover-up, thousands of Chinese took to the streets in protest to rebuke the CCP. A prominent symbol of the protests has been blank sheets of paper, held up by demonstrators as a call to end strict censorship policies.

The protests spawned violent reactions from police in some cases, especially in Shanghai, where a BBC journalist was arrested and attacked by police. In a CCP security meeting, officials were reportedly directed to "resolutely crack down on illegal and criminal acts that disrupt social order." Now, officials are reportedly planning to announce that restrictions and testing requirements will again be scaled back.

China's lockdowns have been strict from the beginning, but remain more intense than perhaps anywhere else in the world. Military tanks took to the streets in the eastern city of Xuzhou to quell protests, and people have accused authorities of seizing their phones to search for banned apps such as Instagram and Twitter.

The protests and government reaction have been covered across the political spectrum, with many on both left and right framing authorities' treatment of protesters as oppressive and extreme. The lockdowns themselves have also been an ongoing focus of coverage from all sides, especially in the context of the global economy and supply chains, since many manufacturing plants and warehouses in China have been closed.

"The official factory statistics in China revealed that activity fell to its lowest level since April 2022. The Purchasing Managers Index for November dropped from 49.2 in October to 48, according to the BBC. If factory activity falls below the 50-point mark, that is typically an indication of economic contraction rather than growth. Earlier expectations by analysts predicted a dip to only 49, according to Reuters. "

China's COVID Lockdowns Once Inspired Western Officials; They Should Listen to Protesters Instead

"Public health officials around the world took inspiration from China's draconian pandemic response. The recent round of criticism of Beijing's lockdowns suggests they are now taking their lead from anguished reactions to those policies."

"These messages — elusive, creative and often ironic — were among many that captured the tone of protests across China this past weekend, as fury over lockdown measures nearly three years into the pandemic has rapidly developed into one of the boldest displays of dissent against the Chinese authorities in years."

What’s happening in China after zero-Covid protests? Here’s what you need to know

"Public protest is exceedingly rare in China, where the Communist Party has tightened its grip on all aspects of life, launched a sweeping crackdown on dissent, wiped out much of civil society and built a high-tech surveillance state. The mass surveillance system is even more stringent in Xinjiang, where the Chinese government is accused of detaining up to 2 million Uyghurs and other ethnic minorities in camps where former detainees have alleged they were physically and sexually abused."

"Expectations have grown around the world that China, while still trying to contain infections, could look to re-open its borders at some point next year once it achieves better vaccination rates among its hesitant elderly. Health experts warn of widespread illness and death if COVID is let loose before vaccination is ramped up."