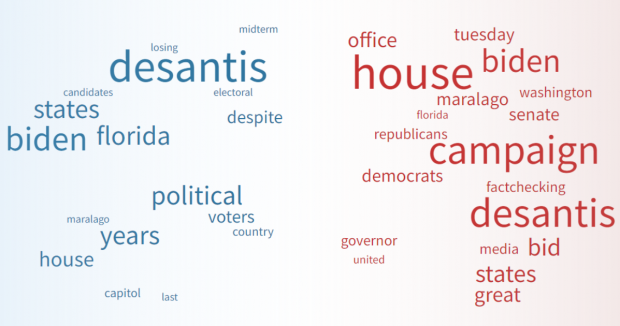 On November 15, 2022, Donald Trump ended over a year of speculation and launched his bid to become U.S. President in the 2024 presidential election. AllSides analyzed potential media bias around this development.

Here were some of the top words used in coverage of the announcement from some left- and right-rated news media, from to our analysis of ten outlets: 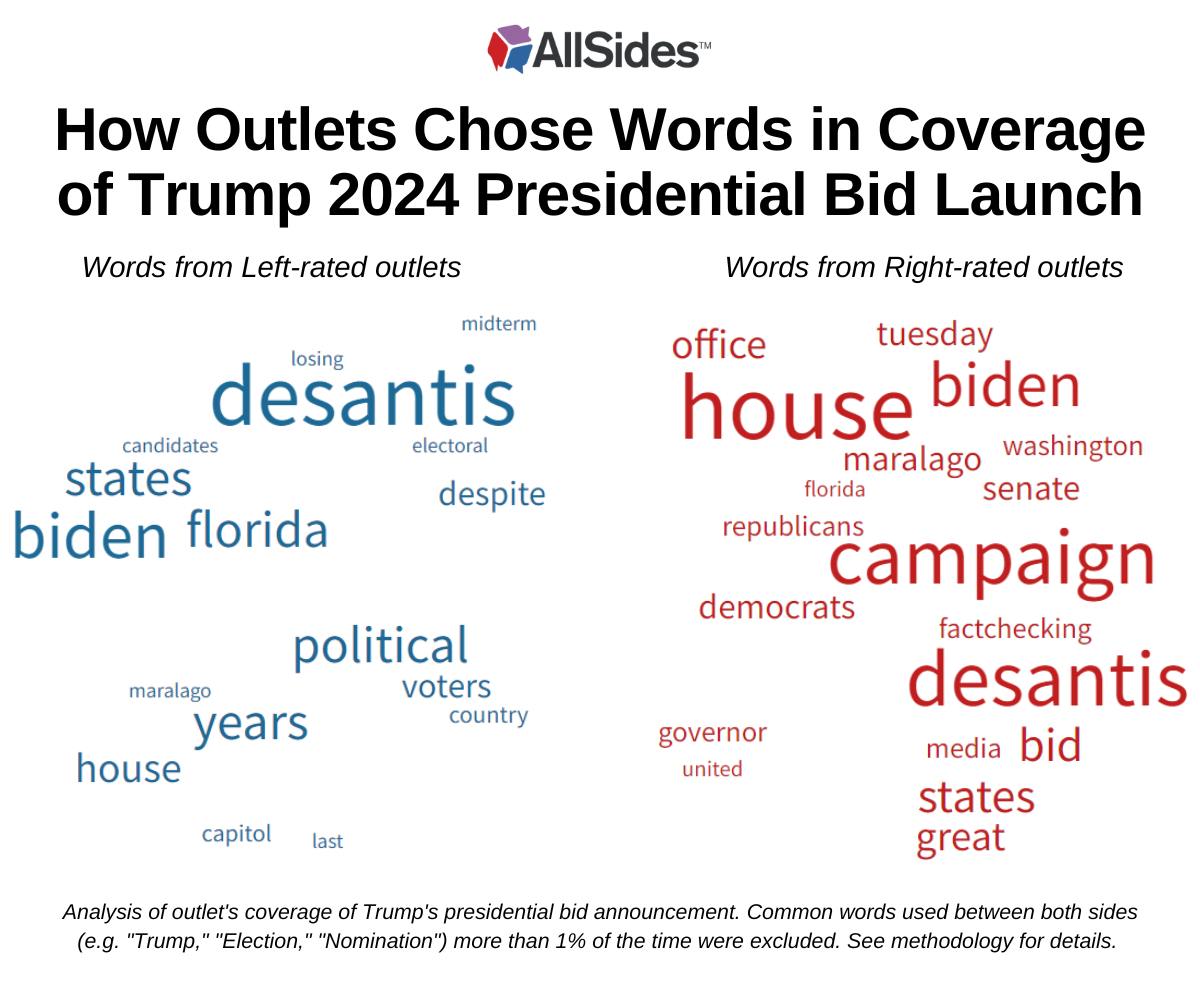 There were many similarities between the words used by right and left-rated outlets, reflecting similar coverage of Trump’s announcement. Both sides were concerned with Trump’s past in the 2020 election, his standing in the Republican Party, and what this might mean for 2024.

Through an analysis of ten outlets' coverage of Trump’s presidential announcement, we found that many words were unsurprisingly used by outlets on the left and right – Trump, President, Election, Republican, and 2024. These very common words were excluded from the word cloud.

“Yes, the former president who incited an attempted insurrection at the US Capitol with lies about his 2020 election loss — lies he continues to spread to this day, having escaped conviction in impeachment proceedings thanks to his Republican allies — and who has spent much of the last few years either vowing revenge against political enemies or battling a suite of criminal investigations now wants American voters to let him once again lead the democratic system of government he has worked so tirelessly to undermine.”

RELATED: Was Jan. 6 an Insurrection? Where the Left and Right Disagree

Unsurprisingly, outlets on the left were more critical of Trump in their coverage; many mentioned investigations against Trump – such as the January 6 Capitol riot or his handling of classified documents while president. The Guardian (Lean Left bias) ran a story titled, “Trump announces 2024 run nearly two years after inspiring deadly Capitol riot.” None of the outlets on the right used the word “riot” or “insurrection” in their reporting of Trump's bid announcement.

Overall, we found that outlets on the left also used the word conspiracy more in their reporting. The same The Guardian article claimed that “Trump and his allies have seized on the delay [of election results] to spread baseless conspiracy theories about results.” NPR News (Lean Left bias) said that Trump “inspired rank-and-file Republicans to turn toward dangerous conspiracies that have eroded their faith in the electoral system.”

Only one outlet on the right – The Epoch Times (Lean Right bias) – mentioned the word conspiracy in their reporting, saying (emphaisis ours), “...Democrats have orchestrated an elaborate narrative about the events of that day, framing Trump as an architect of an alleged conspiracy to delay the certification of the Electoral College vote.” This cast a much different tone than outlets on the left, which outright accused Trump of spreading conspiracy theories.

Outlets on both sides mentioned Joe Biden, and many portrayed the political challenges of the current president in a negative tone. NPR News said that “Biden’s popularity has suffered” and that he “has struggled to keep his base fired up,” while The Epoch Times reported that Trump “blamed the Biden administration and Democrats for high inflation, threat of war, and the open southern border.” Currently 80 years old, Biden is speculated to announce a re-election campaign for president.

Outlets on the right also mentioned another investigation more than the left: Trump’s alleged collusion with the Russian government to boost his chances of winning the 2016 election. The Washington Times (Lean Right bias) explained (emphasis ours):

“Mr. Trump got the loudest applause when he attacked the Justice Department and FBI, who opened a fruitless investigation into his purported collusion with Russia to win the 2016 election.”

When looking at the coverage of Trump’s announcement in outlets across the spectrum, our analysis cannot include all articles and does not weigh them by how big of a splash they make. It’s a sample of the coverage, so it’s important to be on alert for articles like this one from the New York Post, but also to remember they are an exception to what was described in our analysis.

All outlets were examined at 10:00am ET on November 16th, 2022; we gathered the top story on each outlet’s homepage mentioning Donald Trump’s presidential announcement in its headline. The story selection process did not take into account the type of article (e.g. news report or editorial/opinion).

For the word clouds, only words relevant to the story were included; common words such as "said," "this," "of," and "would" were excluded. Words used more than 1% of the time on both sides were also excluded, including “Trump,” “Election,” “Nomination,” “President,” “Republican,” “Former,” “Run,” “2020,” and “2024.” Each word was analyzed for the number of times used on the left and on the right. The more times a word was present, the larger the word in its respective word cloud.