In this context, conservatives point out that progressives’ attitudes toward prejudice are determined by the target group, such that progressives protest the expression (and even existence) of negative feelings or attitudes towards women, members of racial minority groups, the LGBT community, Muslims and other non-Christians, etc - but willingly and intentionally express prejudice toward white conservatives, white men, and white Christians.

progressives generally do not dispute the existence of the double-standard. Rather, they take the position that such a double-standard is necessary and just because of the unequal power dynamics that existed historically and continue to exist (in various forms) to this day.  From the progressive perspective, prejudice against those with less power is immoral, while prejudice against the powerful is not only socially acceptable but morally virtuous, as a way to oppose structural power and create a more just society.

As with privilege, white conservatives (especially those with lower incomes)  tend to either dispute their higher status or argue that they’ve earned whatever advantages they enjoy through hard work and effort. As such, the progressive distinction based on wealth and power does not resonate for them.

Importantly, there are various types of prejudice.  For example, psychologist Susan Fiske makes the distinction between paternalistic prejudice (when we have warm feelings for the group but don’t see them as competent), contemptuous prejudice (when we have both low warmth and believe them incompetent), and envious prejudice (when we have low warmth but see them as competent).  Her research suggests that the kind of prejudice we have depends at least in part on the specific group that is targeted (see below image from her 2002 article in the Journal of Personality and Social Psychology). However, based on typical progressive and conservative narratives, it is also possible that progressives and conservatives don’t so much differ in how much prejudice they have (e.g., toward racial minority groups) as in the type of prejudice they hold and/or are willing to own up to.

That is, because they see their problems and relatively low status in society as being due to poor choices or low motivation, conservatives may be more likely to see Hispanics, poor blacks, welfare recipients and even poor whites with contempt, while progressives who tend to attribute these groups’ struggles to prejudice and other environmental constraints may be more likely to see these same groups paternalistically.

- Do you think people tend to get what they deserve?

- When you think about a group that is not doing well in terms of income, education, or health, do you think it is the group’s fault or the fault of how society is organized?

- Pick several social groups you have strong feelings about. For each group, think about how how much warmth you feel toward them and how competent you think they are. 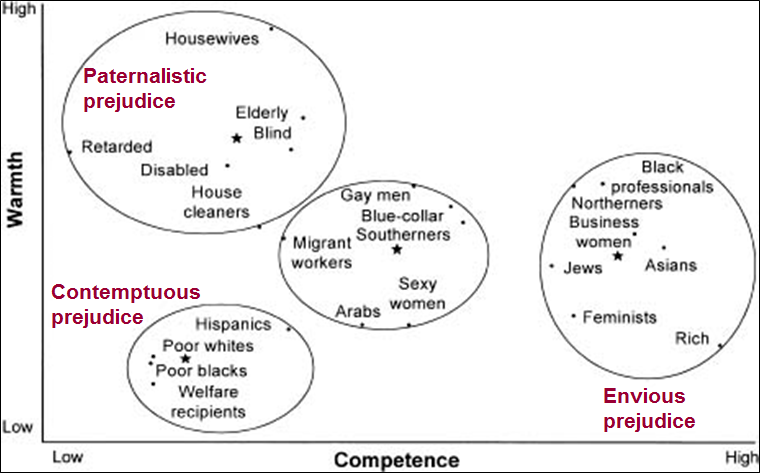