Whereas equality is typically understood as providing the same level of opportunity and assistance to all segments of society, equity describes providing various levels of support and assistance depending on specific needs or abilities of certain groups.

The concept of equity zeroes in on fairness of treatment, as opposed to whether or not outcomes or the treatment itself are equal. Equity might, for example, be said to exist if two people each get different medical treatment because they each have a different condition, each calling for different measures. Equity can also be said to exist if two people each get different amounts of prison time because each sentence equally “fit the crime.” An “equitable” system, means a system that is perceived to be fair. Equity exists when people have been treated fairly. However, this is perhaps where red-blue agreement ends, because people disagree both about what counts as fairness and what steps are needed (if any) to make existing societies fair.

In matters of public policy, when some people hear the word "equity," they hear redistribution, or a system in which resources are re-allocated to favored groups. In this view, equity is fundamentally unfair, because it effefctively punishes productive people in order to give to those who did earn those things of their own merit. Some see equity as being the underpinning of left-wing, socialist, or communist government, because resources would be reallocated to favored groups that are perceived to be underserved by society, often when their supposed marginalization is not actually true.

For example, many conservatives consider it unfair to provide special treatment, resources, or access to a group of people because of the aggregate situation of that group. They see this as fundamentally inequitable, because such arrangements violate a basic principle of equity — that people each get treated as an individual, in accordance with their individual merit. It is on those grounds that many people strongly oppose affirmative action, for example, or reparations. 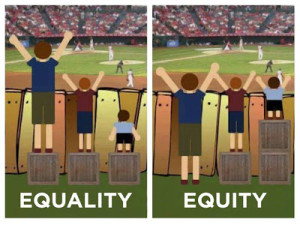 Others, however, usually on the liberal side, believe that certain inequalities need to addressed by interventions, whether those inequalities are caused by things that happened in the past or the present. One obvious example is affirmative action. Leftists sometimes point out that back in 1865, very few of the newly freed slaves were given “40 acres and a mule,” and therefore had to accept brutal forms of employment that replicated slavery, and even now, one can see the consequences: black people whose enslaved ancestors were given some tools and/or property are much more likely to now be in the African-American upper class. Markets, they say, do not on their own repair gross inequities over time.

Some conservatives respond that giving special treatment to historically disadvantaged groups is more than unfair; it’s actually harmful to those it’s trying to help, because it tells them they need special help, encourages a victim mentality, discourages personal responsibility and effort, and deprives them of the growth that happens when one overcomes obstacles.