What Does Kansas' Abortion Vote Mean for the 2022 Elections?

Kansas voters rejected a push to remove the state’s constitutional abortion protections on Tuesday. What does this mean for the 2022 elections and abortion access nationwide?

Voters in Kansas turned out in record numbers. Over 900,000 votes were cast in the abortion referendum, representing roughly 47% of the state’s registered voters. Top Republican and Democratic candidates in Tuesday’s Kansas primaries received roughly 463,000 and 276,000 votes, respectively — meaning tens of thousands of Kansans voted on abortion but not for governor or U.S. Senate.

Political analyses across the spectrum suggested the vote could be a boost for Democrats and pro-choice activists ahead of the 2022 elections; a New York Times (Lean Left bias) analysis said the vote “implies that around 65 percent of voters nationwide would reject a similar initiative.” However, analysts from the right often argued that the abortion “fight” was “only just beginning.”

Media reactions varied widely but mostly aligned with partisan trends. While a writer at The Nation (Left bias) argued the vote showed that “voters nationwide are pro-choice,” several writers at National Review (Right bias) described the referendum as “unquestionably” disappointing; one even asked, “How do we live with evil?” Meanwhile, the New York Post (Lean Right bias) praised the referendum for showing that “Democracy works,” and a writer at CNN (Left bias) said a vote on a “fundamental right” never should have happened.

What Kansas Abortion Vote Means for Democrats, Republicans in the Midterms
Newsweek 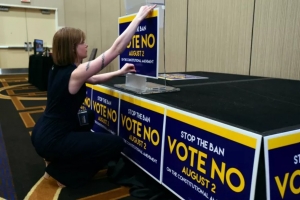 The decision by Kansas voters to protect their abortion rights is a taste of how the overturning of Roe v. Wade could impact November's midterm elections.

In the first electoral test since the Supreme Court overturned the 1973 ruling giving women a federal right to an abortion in June, more than 59 percent of people in Kansas backed upholding the state's constitutional right for women to access the procedure.

Given that former Republican President Donald Trump won the state by 15 points (56-41) only two years ago, Monday's referendum result is considered a landslide, pointing to unhappiness with... 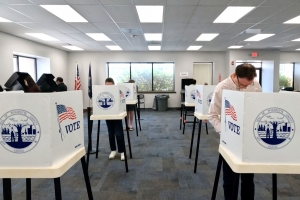 On Tuesday, an overwhelming majority of Kansas voters defeated a referendum that would have added language to the state constitution declaring that the state’s basic law “does not create or secure a right to abortion.”

The ballot initiative was a response to the 2019 Kansas supreme-court ruling that held the state constitution contained a “fundamental” right to abortion since 1859. That judicial usurpation, plus the post-Dobbs, pro-abortion media monsoon, made the task of the pro-life movement very difficult in Kansas. But Tuesday’s defeat in a high-turnout election was so lopsided — 58.8 percent... 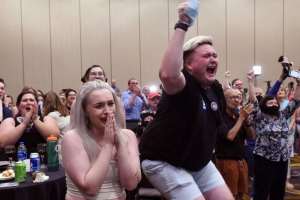 Donald Trump won Kansas by a 15-point margin in 2020, sweeping 100 of the state’s 105 counties as the presidential candidate of a Republican Party that has for decades pledged to overturn the Roe v. Wade Supreme Court decision that protected abortion rights. So a lot of folks just presumed, prior to Tuesday’s Kansas vote on whether to remove protections for abortion access from their state Constitution, that the anti-choice position would prevail.

But the first statewide vote on abortion rights since the conservative supermajority on the Supreme Court overturned Roe didn’t go as the right...

Open on The Nation
Possible Paywall