Donald Trump made a statement today about the Boeing Air Force One plane costing 4 billion dollars and the fact that he wanted to cancel the deal. 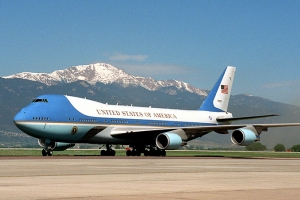 President-elect Donald Trump blasted Boeing on Tuesday for alleged cost overruns on a new fleet of Air Force One planes and called for the government to cancel the contract, saying the project price tag is "out of control."

The president-elect took aim at Boeing's Air Force One work in a Tuesday morning tweet, and reiterated his concerns to reporters minutes later at Trump Tower.

President-elect Donald Trump wants to clip the wings of a new Air Force One, saying the customized 747 is too expensive.

President-elect Donald J. Trump, who has for years flown in a jet bearing his name, appeared to cancel a pending order for a new Air Force One, saying Tuesday morning on Twitter that the upgrade would cost too much.

Escalating his attack on democracy from within the White House, President Trump on Wednesday distributed an astonishing 46-minute video rant filled with...

On Tuesday, the New York Times reported that President Donald Trump has been discussing wide-reaching pardons for three of his children, his son-in-law, and...

President Trump has discussed with advisers whether to grant pre-emptive pardons to his children, to his son-in-law and to his personal lawyer Rudolph W....

A coalition of historical and government watchdog groups are suing the White House and President Trump over concerns that records from his presidency will be...

Is Trump really going to run for president again in 2024?

Publicly, President Trump is still clinging to the false belief that he was the true winner of the 2020 election. In private, however, he has begun planning...

A government watchdog group filed a lawsuit against President Trump, his son-in-law Jared Kushner and the White House on Tuesday to prevent them from...

A government watchdog group is suing President Trump, his son-in-law and adviser Jared Kushner, and the White House to prevent the deletion of official emails...

President-elect Joe Biden will likely have to wear a walking boot for several weeks after suffering small fractures in his foot, his physician said on Sunday.

President-elect Joe Biden has formed his all-female senior communications team. Members of his staff include Elizabeth Alexander as communications director...

President Trump said Thursday that he would leave office if the Electoral College votes for President-elect Joe Biden, but also alleged “massive fraud” in the...

A super-majority -- 68% of Republicans and GOP primary voting independents -- would love to see President Donald Trump run again in 2024 if he ultimately fails...

U.S. General Services Administration chief Emily Murphy informed Joe Biden on Monday that her agency has formally ascertained him as the apparent winner of the...

More than 130 Secret Service agents assigned to protecting the White House or President Trump are isolating after they tested positive for the coronavirus or...