Top Congressional Democrats including House Speaker Nancy Pelosi, Majority Leader Steny Hoyer, and Senate Minority Leader Chuck Schumer walked out of a meeting with President Donald Trump on Wednesday, claiming he had a "meltdown" and went on a "nasty diatribe." White House press secretary Stephanie Grisham said the president was "measured, factual and decisive," and said the Democrats went "in front of cameras to whine." Trump has not publicly commented; the meeting followed a House vote that condemned Trump's removal of U.S. forces from northern Syria, 354-60.

Outlets on the right side of the political spectrum tended to mention the statements from the White House and other Republicans more prominently in their coverage.

From the Right
320
White House
'He was insulting': Democratic leaders stomp out of White House meeting with Trump on Syria
Washington Examiner 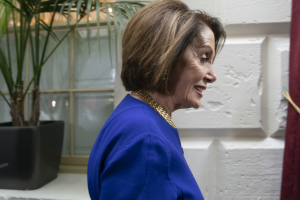 "He was insulting, particularly to the speaker ... He called her a third-rate politician," Senate Minority Leader Chuck Schumer told reporters on the White House driveway.

Schumer accused Trump of delivering a "nasty diatribe" when defending his decision this month to withdraw U.S. troops from Syria, which resulted in a Turkish attack on formerly U.S.-allied Kurds.

The meeting occurred moments after the House voted 354-60 to rebuke... 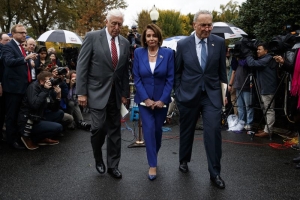 President Trump went on a “nasty diatribe” during a Wednesday meeting on the increasingly volatile situation in Syria, calling Nancy Pelosi a “third-rate politician" to her face and acting in an overall “appalling” manner, the House speaker and other Democratic leaders said after storming out of the tense sit-down.

Speaking immediately after ditching the hostile Cabinet Room standoff, Pelosi said Trump suffered a “meltdown” after she pointed out that the House had just overwhelmingly passed a resolution condemning his recent withdrawal of U.S. troops from northern Syria — a decision... 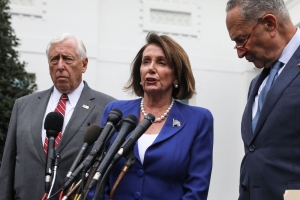 Democratic congressional leaders said they walked out of a White House meeting Wednesday on Syria after what House Speaker Nancy Pelosi called a “meltdown.”

After top Democrats left the bipartisan meeting with Trump, Pelosi told reporters that the president appeared “shaken up” by a House vote condemning his decision to remove U.S. forces from northern Syria. The House approved the resolution in an overwhelming 354-60 vote, as even a majority of Trump’s Republican Party supported it.

“That’s why we couldn’t continue in the meeting because he was just not relating...