Are House Republicans Actually Trying to Abolish the IRS?

For Context: The proposed ‘Fair Tax Act’ would abolish the Internal Revenue Service (IRS) and income taxes, and instate a 30% national sales tax. Rep. Kevin McCarthy (R-CA) reportedly agreed to bring the bill to a vote as part of concessions he made to Republican representatives who initially withheld support for his House Speaker bid.

In Favor: Rep. Buddy Carter (R-Ga.) spearheaded the bill, and recently said that if people "are going to pay a tax, I think they would much rather pay a consumption tax as opposed to an income tax." Rep. Andrew Clyde (R-Ga.) said the proposal "simplifies the tax code—eliminating the need for the IRS and establishing a fair system for all Americans."

Skeptical: Grover Norquist, a tax reduction advocate, outlined the history of the proposed legislation, which has been introduced by Republican lawmakers in every congress since 1999 but has lost support within the party, “falling from a peak of 76 House Republicans in 2015 to 24 today.” Norquist concluded the Fair Tax Act "has no hope of passing in the House." Steve Benen, a producer for The Rachel Maddow Show on MSNBC (Left Bias), concluded that Democratic leaders "couldn’t be more pleased" that the legislation is being pushed by select Republicans House members, and that Democrats are "eager, almost desperate, to treat the bill like a pinata."

House conservatives are breathing new life into an old proposal to do away with income taxes, payroll taxes, estate taxes and even the IRS itself in favor of a supersized sales tax that would account for nearly all government revenues.

Versions of the far-reaching plan have been around for decades, and with Democrats controlling both the White House and Senate, the proposal has little chance of making it into law. But frustration over the $80 billion funding boost for the IRS passed by Democrats last year has Republicans wanting to...

A National Sales Tax Is a Terrible Idea
Grover Norquist 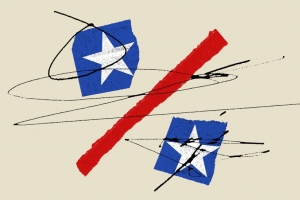 A small minority of House Republicans may force a vote on the creation of a national sales tax. This will needlessly give Democrats a political cudgel in exchange for a flawed bill with no hope of passing.

The Fair Tax Act has been introduced by a small handful of Republicans in every Congress since 1999. The bill proposes to abolish the Internal Revenue Service and eliminate the federal income tax. So far, so good. Unfortunately, the bill would replace the income tax with a 30 percent national sales tax on...

There’s still some mystery surrounding House Speaker Kevin McCarthy and his private deals with his own members. We know the California Republican reached some striking agreements with many of his far-right members in order to get his gavel, but the details are unfolding slowly.

Take, for example, an upcoming vote on a so-called “fair tax.” Semafor reported this week:

As part of his deal to become House speaker, Kevin McCarthy reportedly promised his party’s conservative hardliners a vote on legislation that would scrap the entire American tax code and replace...

News and Information about Taxes
Go ad-free! Support AllSides.
About these ads

Opinion
Why Entitlement Reform Is So Hard
The Dispatch