On Tuesday, voters cast their ballots in primary and special elections in Wyoming and Alaska.

In Wyoming, Rep. Liz Cheney (R), Vice Chair of the January 6 Committee, is facing Trump-backed Harriet Hageman and three other candidates to hold onto her House seat. Cheney is the last of the 10 House Republicans who voted to impeach former President Donald Trump, and she has stated that Trump poses a threat to democracy with his claims of a stolen election in 2020. She is expected to lose, and is behind in some polls by almost 30 points.

In Alaska, where the top four finishers for the Republican primary will advance to the general election, Sen. Lisa Murkowski (R) is all but certain to advance. She is facing Trump-backed former Alaska Department of Administration Commissioner Kelly Tshibaka. Murkowski was one of seven Republican Senators who voted to impeach Donald Trump during his second impeachment trial; she is the only one of the seven who is up for re-election this year. Meanwhile, former Governor Sarah Palin is attempting a comeback in a special election to finish the late Rep. Don Young's term, who died in March. Palin faces Republican Nick Begich III, the nephew of former Democratic Senator Mark Begich. 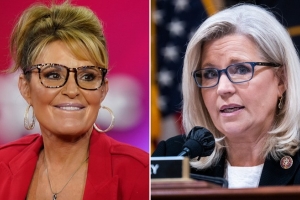 Jackson, Wyoming (CNN)Former President Donald Trump's campaign to purge the Republican Party of his opponents could reach its most dramatic moment of the 2022 midterm election cycle on Tuesday in Wyoming.

Rep. Liz Cheney, the vice chair of the House committee investigating January 6, 2021, who was booted from her House leadership position and censured by the GOP organization in her state after voting to impeach Trump, faces the Trump-backed Harriet Hageman and three other candidates in the GOP primary for the state's lone House seat.

A Cheney loss would be a demonstration that...

Rep. Liz Cheney may be about to lose her day job. If so, she’s totally OK with that.

Cheney, a third-term Wyoming Republican, is charging into Tuesday’s primary in the Cowboy State defiantly embracing the very message that’s sparked the conservative backlash brewing to oust her: Namely, that former President Trump, with his baseless claims of a “stolen” election, poses an existential threat to the country’s democratic foundations and should be barred from holding future office.

That argument, combined with Cheney’s national prominence, has made her both the public face... 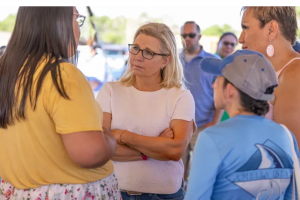 As Alaska and Wyoming hold primary elections on Tuesday, both federal lawmakers face voters for the first time since moving early last year to impeach Trump for his role in inciting the Jan. 6, 2021, storming of the U.S. Capitol.

While Cheney faces what public opinion polls suggest is near-certain defeat in her bid for a fourth two-year term representing Wyoming’s at-large House seat, Murkowski is all but certain to pass her first...