Former President Donald Trump's ban from Facebook has sparked debates about free speech, speech that encourages violence, and online censorship. It's also elicited vastly different reactions from media voices and pundits across the spectrum. Facebook's Oversight Board announced Wednesday it supported upholding the company's ban of Trump, but criticized the company for apparently breaking its own rules by "imposing a suspension that was indefinite." The board ordered Facebook to review the ban within the next six months.

Many voices published in prominent left-rated media outlets called for the ban to be permanent, with one columnist saying Trump is "unhinged and manipulative enough to use platforms such as Facebook to do serious harm." Many voices from right-rated outlets were critical of Facebook and the ban, framing it as politically-motivated censorship; one warned that "if Big Tech continues to feel emboldened to silence a sitting president, they can and will silence the rest of us." Some on the right also praised the board for questioning the ban's permanence. Others focused on public opinion around the ban; data from Pew Research Center says 50% of Americans oppose a permanent social media ban on Trump, and 49% support it. 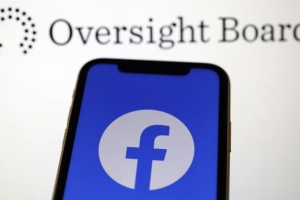 Facebook’s Oversight Board decided to uphold Facebook’s and Instagram’s suspension of former President Donald Trump from their platforms today. This decision is the wrong one, and one that all Americans, regardless of political affiliation, should be concerned about. However, the Oversight Board was entirely appropriate to admonish Facebook for the fact that its penalty was vague and standardless.

Big Tech companies should not be allowed to play by a set of rules that give them undue influence over American society while also avoiding any accountability for how they use that... 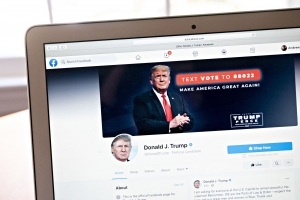 Donald Trump remains banned from Facebook Inc.’s global echo chamber, and that’s a good thing. After the social media company banned him in January for inciting a deadly insurrection at the Capitol, its Oversight Board — the outside group the company established to monitor controversial content and arbitrate thorny issues such as Trump’s exile — said Wednesday that his history of violence disqualified him for the time being.

“The Board found that, in maintaining an unfounded narrative of electoral fraud and persistent calls to action, Mr. Trump created an environment...

Read full story
Some content from this outlet may be limited or behind a paywall.
See full media bias rating for Bloomberg
From the Center
1128
Free Speech
Americans divided on whether Trump should be permanently banned from social media
Pew Research Center 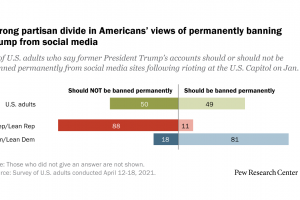 Americans are split on whether former President Donald Trump should be barred from social media. Some 49% of U.S. adults say Trump’s accounts should be permanently banned from social media, while half say they should not be. But views are deeply divided along partisan lines, according to a new Pew Research Center survey.

The survey, fielded April 12 to 18, was conducted before Facebook’s independent oversight board upheld for now the suspension of Trump’s account that was instituted in the wake of the violent riots at the U.S. Capitol...