Two members of the Oath Keepers, including the group's founder, were convicted of seditious conspiracy Tuesday for their role in the Jan. 6, 2021 Capitol riot.

Key Quote: "The Justice Department is committed to holding accountable those criminally responsible for the assault on our democracy on January 6, 2021," Attorney General Merrick Garland said. "The prosecutors and agents on this case worked tirelessly, with extraordinary skill, and in the best traditions of the Department of Justice."

For Context: The Oath Keepers is an anti-government group that often aligns with right-wing causes. Prosecutors argued that the group's members orchestrated a violent plot to overturn President Joe Biden's 2020 victory. Testifying in his own defense, Oath Keepers founder Stewart Rhodes said there was no plan to storm the Capitol. He and another Oath Keeper, Kelly Meegs, were found guilty of seditious conspiracy, which carries a maximum 20-year prison sentence. Three other group members were acquitted of the conspiracy charge, but found guilty of obstructing an official proceeding and aiding and abetting the riot.

How the Media Covered It: :Left- and center-rated sources covered the conviction much more prominently than right-rated outlets did. Some, such as CNN (Left bias), focused on what the charges may mean for Trump. Some right-rated sources focused more on the acquittals, which were the first in any of the Capitol riot probes. 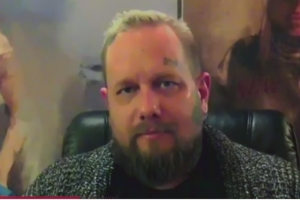 A former member of the Oath Keepers called the decision by a jury Tuesday to convict the founder of the group with sedition crimes “necessary” and warned about the potential for future violence in the next two years.

Stewart Rhodes was found guilty of seditious conspiracy after a nearly two-month-long trial that showcased the far-right extremist group’s efforts to keep Republican Donald Trump in the White House at all costs. Prosecutor argued Rhodes was the mastermind behind a violent plot to overthrow Joe Biden’s presidential win during the Jan. 6, 2021, riots...

A jury found Oath Keepers founder Stewart Rhodes guilty of seditious conspiracy for his role in the Capitol riot that occurred as Congress was certifying now-President Joe Biden’s win over then-President Donald Trump.

One other member of the group, Kelly Meggs, the leader of the Florida chapter of the organization, was found guilty of the same charge, while the three others on trial, Kenneth Harrelson, Jessica Watkins, and Thomas Caldwell, were found not guilty of seditious conspiracy.

The split verdict is notable, in part because the not-guilty verdicts were the first acquittals reached by a jury... 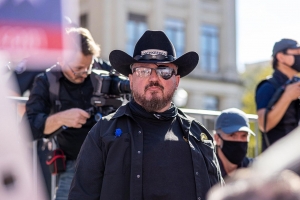 A federal jury in Washington on Tuesday found Oath Keepers founder Stewart Rhodes and Kelly Meggs, another member of the far-right organization, guilty of seditious conspiracy in connection with the Jan. 6 attack on the U.S. Capitol.

Three other members of the group who were on trial alongside Rhodes and Meggs — Jessica Watkins, Kenneth Harrelson and Thomas Caldwell — were found not guilty on the seditious conspiracy charge. All five defendants were found guilty of obstruction of an official proceeding and aiding and abetting for their actions on Jan. 6.