US Senate, Joe Manchin, Build Back Better, infrastructure bill
Save for Later
From The Left 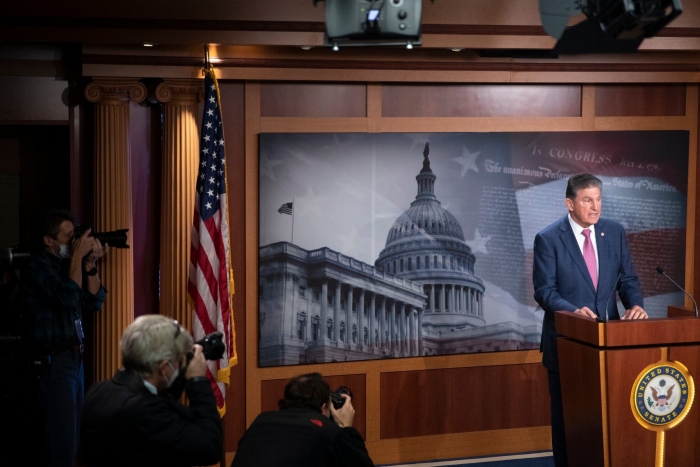 Senator Joe Manchin III of West Virginia raised new doubts on Monday about an emerging compromise on a $1.85 trillion climate change and social safety net bill, warning that he had serious reservations about the plan and criticizing liberals in his party for what he called an “all or nothing” stance on it.

Mr. Manchin’s broadside, delivered during an appearance in the Capitol, threatened to upend the Democratic Party’s ambitions to vote this week on President Biden’s top two legislative priorities, even as lawmakers were gathering for what was supposed to be a momentous week for the president’s ambitious domestic agenda.

It came as congressional negotiators were closing in on a final deal on the social policy and climate legislation, which progressives have called a prerequisite to supporting a separate, $1 trillion bipartisan infrastructure bill.

Top officials were hammering out last-minute details of the policy plan, including a program to curb the rising cost of prescription drugs, which had been left out of an outline that Mr. Biden presented on Thursday. Negotiators had all but secured a compromise that would include a $2,000 annual cap on out-of-pocket prescription expenditures for older Americans, according to Senator Ron Wyden of Oregon, the Democratic chairman of the Finance Committee. There would also be price limits on insulin, rebates on drugs whose prices rise faster than inflation and some limited government power to negotiate drug prices.

Read full story
Some content from this outlet may be limited or behind a paywall.
US Senate, Joe Manchin, Build Back Better, infrastructure bill