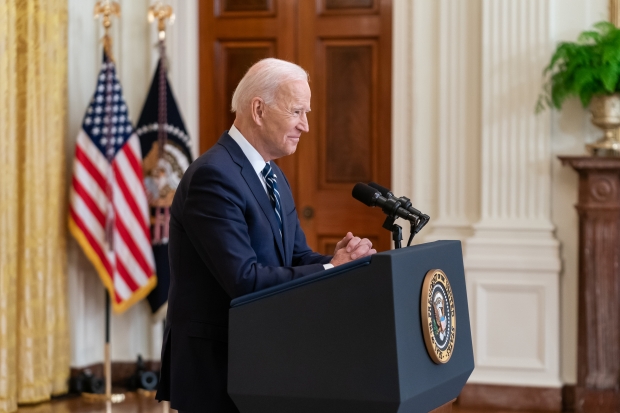 For most of his career in Washington, Joe Biden was known as… voluble. In other words, he talked a lot. A LOT. During his years in the Senate, he was renowned for his long-windedness, and during his time as Vice President frequently veered from the Obama Administration’s prescribed messaging during his verbal meanderings. So by the time he announced his campaign for president in 2019, it was widely expected that he would be frequently devoting time to explaining and backtracking from his verbal missteps.

But his political advisors dramatically limited his accessibility to the reporters covering his candidacy, and with the added assistance of a Covid-limited campaign schedule, Biden’s inaccessibility provided him with an unaccustomed level of message discipline. Since taking office in January, Biden has continued to be somewhat measured in his public comments. The result is a White House that has been able to stay on its prescribed message much more consistently than those who have watched Biden over the years could have predicted.

The president has maintained this relatively low volume not just during his interactions with the news media but in his scripted policy pronouncements as well. Biden’s approach has been on display most recently during the recent Israel-Hamas conflict, where he continually emphasized the benefits of “quiet diplomacy”, and where his private conversations with Israeli Prime Minister Benjamin Netanyahu were reportedly more effective at achieving a cease-fire than public confrontations would have been.

Biden has employed a similar strategy in preparing for an unavoidable public reckoning with China. While his advisors caused an extremely visible flare-up with their Chinese counterparts at a summit meeting earlier this spring, Biden has been much more low-profile as he carefully lines up support from European and Asian allies. With the notable exception of biting on an interviewer’s question in which he agreed that Russian leader Vladmir Putin was a “killer”, Biden has been fairly circumspect in his public comments regarding other global challenges as well.

But that same caution that has served him so well on the world stage may be creating problems for him here at home. After successfully passing Covid relief legislation early on, much of Biden’s other domestic policy priorities are foundering. Because his White House is so focused on emphasizing the pandemic and economic issues, Biden devotes little time in public to the rest of his agenda. When he does talk about his other policy goals, it tends to either be in very general terms or in the context of settling deadlines for action. The result is that congressional leaders of both parties have dominated public and media attention on these issues. In a closely divided Congress, much of the discussion tends to be on negotiations, process and gridlock.

The two parties are still far apart on Biden’s infrastructure package, and Biden’s emphasis on bipartisanship is starting to come under fire from fellow Democrats who want to move forward on party-line votes. The deadline he set for police reform has come and gone, and while the two sides are making progress, it’s clear that some presidential-level involvement could accelerate the process. Biden has been similarly removed from the discussion regarding a commission that would examine the Capitol violence of January 6. Voting reform legislation is frozen in place. And he has been all but silent on his plans for immigration reform, gun control, and climate change.

It’s entirely possible that quiet diplomacy will work just as effectively with Republicans as with foreign leaders. Biden’s years in the Senate correctly taught him that public pressure is often a less effective way of negotiation. And he also understands that after four year of Donald Trump’s ubiquity, the American people are ready for their president to be a less constant presence in their lives.

But one of the presidency’s greatest advantages is the bully pulpit. Biden can command the voters’ attention and drive media coverage much more than any other elected official. Biden’s team may believe that dealing with Covid and China will be enough to get him re-elected. But if he wants to accomplish a broader set of goals, it might be time for the older, louder Joe Biden to reemerge. It’s time to pump up the volume.

Want to talk about this topic more? Join Dan for his weekly webinar “Politics In The Time of Coronavirus: https://lawacth.force.com/LightningMemberPortal/s/lt-event?id=a1Y3h000001KTueEAG. Or read more of Dan’s writing at: www.danschnurpolitics.com. This piece was reviewed and edited by AllSides' News Editor Micaela Ricaforte (Center bias).