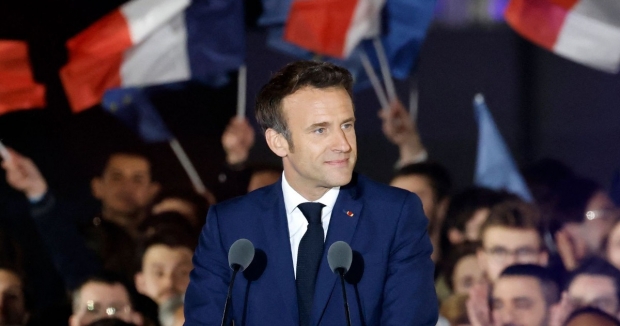 Among the many topics on which Winston Churchill was a known expert were France, elections and near-misses. So after Emmanuel Macron’s barely successful re-election campaign this past weekend, Churchill is a logical source to consult for guidance on how to interpret the election results.

First of all, the greatest of Britain’s leaders was a devoted Francophile.

“All my life I have been grateful for the contribution France has made to the culture and glory of Europe,” Churchill said during a visit to that country shortly after the Allied victory on D-Day.

Second, he recognized the potential danger of unbridled populist passion.

“The best argument against democracy is a five-minute conversation with the average voter,” he once said.

But most relevant to Macron’s defeat of arch-conservative Marine Le Pen was Churchill’s observation that “Nothing in life is so exhilarating as to be shot at without result.”

Macron was on the firing line this week. As was centrism and as was Europe. All three survived, but in the exhilaration of a dodged bullet, it would be a great mistake to underestimate the gathering strength of the forces aligned against them. Le Pen lost by a larger-than-expected margin, but she cut Macron’s advantage in half from their last contest five years ago. She won the youth vote outright and overall voter turnout was the lowest in half a century. Macron did escape with a win, but it came with plenty of warnings attached – not only for him, but for centrists and internationalists across the globe.

The first round of France’s elections ago delivered jarring results, in which Le Pen and other extremist candidates from the far left and the far right combined to attract almost 60 percent of the vote. These dissimilar outsider candidates were united in their shared populist disdain for economic elites, international engagement and the political establishment in general. Macron was fortunate that Le Pen barely edged out hardline liberal Jean-Luc Melenchon, as he was able to sufficiently frighten disenchanted French voters that Le Pen’s brand  of ultra-nationalism represented a tangible danger to the county’s future.

But such was the alienation toward Macron on the political left that Melenchon refused to endorse him in the runoff and immense numbers of young people and other progressives simply did not vote. The uncomfortable echoes to Bernie Sanders’ diffidence toward Hillary Clinton’s candidacy in 2016 were palpable, and could also foretell the challenges Joe Biden will face in turning out his party’s progressive base this fall.

The signs for mainstream conservatives in other countries are not much more encouraging. After Le Pen’s landslide defeat in 2017, the reaction among French nationalists was to seek out even further-right alternatives such as talk show host Eric Zemmour, who pulled thousands of votes from Le Pen in the first round of balloting. Zemmour seems poised to contest Le Pen’s conservative flank for the foreseeable future, just as other Western leaders such as Donald Trump and Boris Johnson have watched as their grassroots followers have been tempted by even more extreme voices.

Le Pen, Zemmour and Melenchon are all poised to gain support in this June’s legislative elections, leaving Macron stranded with a decreasing base of support in the center. If the lesson from France is that the political left is moving further to the left and the political right is moving further to the right, the prospects for revitalized internationalist establishment leaders – at the same time as a war in Ukraine, increased belligerence from China, and rising tensions in Iran, North Korea and elsewhere – is not encouraging.

Even weakened, the fact that a committed European Union supporter still leads France is a very good thing. (As Churchill also said, “The Almighty in His infinite wisdom did not see fit to create Frenchmen in the image of Englishmen.”) If France had joined Great Britain in exiting the E.U., it’s difficult to see how the institution could have survived.

Macron’s task going forward will be to rebuild the center by convincing angry voters that global engagement will help their economic interests rather than harming them. But if he is to govern effectively, France’s highbrow leader will now have to learn to demonstrate respect toward his country’s embittered working class. Can he do it? Churchill, once again, may have the answer.

“No part of the education of a politician is more indispensable than the fighting of elections.”