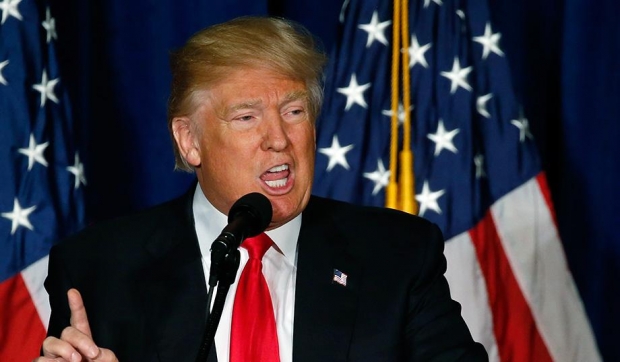 This week, presidential candidate Donald Trump gave a speech on his foreign policy plans.Emphasizing the threat of radical Islamic terrorism, he spoke of “extreme vetting” of immigrants and said, among other things, that the US needs to work with Russia to fight ISIS. Did he put forward insightful points and good ideas? Or did he mostly miss the mark and overlook the facts? Let’s see how this story was covered on different sides this week.
See other news featured by AllSides such as Will Pence Release Taxes?, Trump Campaign Overhaul, US Swimmers Detained in Brazil and the latest AllSides News.
Snippets from the Right
Donald Trump wants ‘extreme vetting’ to stop terrorists at border
Washington Times
“Presenting the threat of terrorism in the starkest terms, Mr. Trump said tougher immigration policies must be part of an aggressive strategy to eradicate radical Islam’s ‘ideology of hatred,’ much like the U.S. defeated Nazis and the Soviet Union in the 20th century.
Mr. Trump’s plan to test people who want to enter the United States mirrored some of the requirements on the citizenship test. However, the test would be applied to people seeking to visit or temporarily live in the U.S.Terrorism is a top issue in the presidential campaign and potentially Mr. Trump’s best opening to challenge Mrs. Clinton, who served as secretary of state under Mr. Obama as the Islamic State, also known as ISIS and ISIL, grew into a global powerhouse.”
Snippets from the Left
Fact-checking Donald Trump’s ‘major’ speech on the Islamic State
Washington Post
[Fact check] “‘The rise of ISIS is the direct result of policy decisions made by President Obama and Secretary of State Clinton.’ This is false and facile. The terrorist group is the direct result of the U.S. invasion of Iraq in 2003, as we explored in our interview with Washington Post reporter Joby Warrick, who won a Pulitzer Prize for his book on the rise of the Islamic State. (Trump, of course, supported the invasion of Iraq in 2003.) At best, one could argue that actions that Obama failed to take (over Clinton’s opposition) helped contribute to the growth of ISIS.”
Snippets from the Center
Trump Proposes New, Ideological Test For Some Visitors And Immigrants
NPR
“He also called for international efforts to cut off funding to terrorist groups, expanded intelligence sharing, and cyberwarfare — all steps that are part of the existing White House strategy.
Trump broke with current policy, though, in calling for sharp new limits on visitors and immigrants from countries with a history of exporting terrorism. ‘We will be tough and we will be even extreme,’ Trump said. ‘Our country has enough problems. We don't need more.’
Trump did not renew his controversial call for a ban on all Muslim immigrants. But he did advocate a new ideological test for newcomers, backed by what he described as ‘extreme vetting.’”
Discover more on this topic on AllSides.
Story Of The Week, News, Donald Trump, Foreign Policy