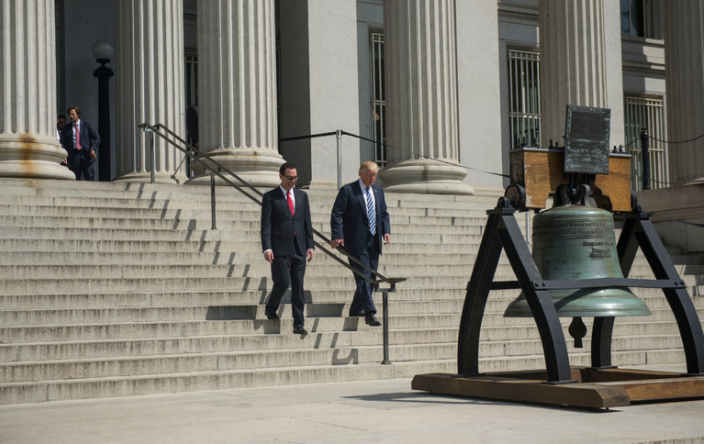 President Trump released his tax plan this week, calling for an overhaul of current economic policy. The plan includes major cuts for both individuals and businesses, but economic analysts on both the Left and the Right say its impact on the federal deficit could be counterproductive.
Know a student or teacher in high school or college? Have them try our new "Mismatch" pilot school program. We are developing a new service that matches students with peers from other schools across the country with different political and socioeconomic backgrounds. But instead of going on a date, they have a structured, civil conversation via video conferencing to learn how to listen to and appreciate each other, especially when they disagree. Please email us to participate.
See other news featured by AllSides such as NAFTA Safe for Now, French Election, Earth Day March for Science and the latest AllSides News.
Snippets from the Left
Economists Fear Trump’s Tax Plan Only Heightens a ‘Mountain of Debt’
The New York Times
"Mr. Trump unveiled the outlines of his much-anticipated tax overhaul, calling for steep tax cuts with only modest offsetting revenue increases. Economists I spoke to this week estimate it would add trillions to the national debt over the next decade.
"We’ve only done the rough numbers, but this looks like a tax cut of a magnitude of about $5 trillion,' said Maya MacGuineas... 'That is simply unimaginable given our fiscal situation and the size of the deficit, which is already the worst since World War II.'
...
Just how much Mr. Trump’s plan would cost the government is hard to determine, given the sketchy details. But the conservative-leaning Tax Foundation estimates that two prospective elements — reducing individual rates to three brackets of 35, 25 and 10 percent, and cutting the tax rate for corporations and pass-through entities (businesses that pay taxes at individual rates) to 15 percent — would cost the Treasury $4 trillion to $6 trillion over 10 years, said Alan Cole, an economist at the foundation."
Snippets from the Right
Trump's Tax Plan: Doubles Standard Deductions, Ends ‘Death Tax’
Fox Business
"The Trump administration unveiled the outline for its comprehensive tax overhaul proposalWednesday, which included a simplification of the tax code, a cut to individual and corporate rates and the elimination of most tax benefits on the personal side.
'[This is the] most significant tax reform legislation since 1986 and one of the biggest tax cuts in American history,' National Economic Director Gary Cohn said during a press conferenceWednesday.
...
While Cohn said the administration anticipated attacks 'from the left and right' over the plan, he said the aim is to 'create jobs and economic growth.'"
Snippets from the Center
Trump's plan to slash business taxes seen as 'guidepost' by congressional Republicans
Reuters
"Investors, who had been awaiting tax-plan details for months, largely shrugged off the news, with many saying it was still short on specifics and faced a long road to enactment. “Wake me up when something actually gets signed into law,” said Greg McBride, chief financial analyst at Bankrate.com in West Palm Beach, Florida.
...
In the plan, unveiled at the White House by Trump economic adviser Gary Cohn and Treasury Secretary Steve Mnuchin, Trump proposed cutting to 15 percent both the income tax rate paid by public corporations and that paid by "pass-through" businesses, including partnerships, S corporations and sole proprietorships.
...
For average U.S. taxpayers, Trump proposed help by doubling the standard deductions for individuals who do not itemize; simplifying tax returns by reducing the number of tax brackets to three from seven; and providing unspecified tax relief for families with child and dependent care expenses."
Discover more on this topic on AllSides.
Tags:
Taxes
Donald Trump
Tax Plan
News
Story of the Week