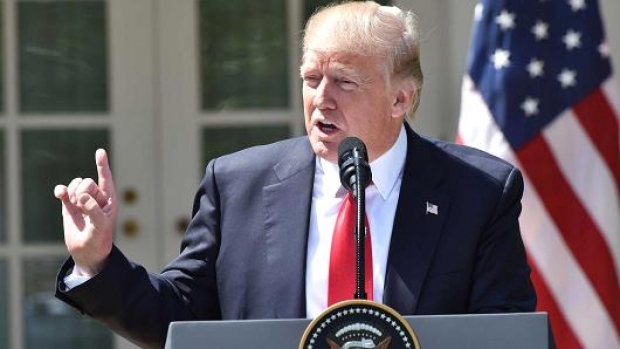 Today at a press conference in the Rose Garden, President Trump officially pulled America out of the Paris Climate Accord. The deal was negotiated between 192 countries, with the U.S. joining Syria and Nicaragua as the holdouts. The Left is pretty firmly against the decision, while the Right is pretty split in their support. Some are happy with the President's announcement citing ideology and economic arguments, while others would have rather stayed in the agreement, citing business motivations. Therefore, we are giving you dueling opinions on the Right this week along with Center and Left coverage.
We want to know, what are your thoughts on America pulling out of the Paris Climate Deal? If you are curious about the results of last week's survey on Net Neutrality, check out the results in our newest blog.
Did you know AllSides has a Chrome extension? Want to know the bias of the news sites you surf? Download it today!
Snippets from the Right
Trump's Paris Agreement withdrawal is the wrong move
Fox News
"First and foremost, withdrawing from the Paris Agreement is the wrong move.
As a dealmaker, President Trump may very well have been able to renegotiate within the parameters of the Agreement, but to be clear, withdrawing from the Paris Agreement isolates the United States and only threatens our most important national interests.
Trump’s move to withdraw of course also comes after his week abroad in Europe, where the President of the United States unmistakably failed to endorse Article 5 of the NATO treaty, unfortunately leaving our generations-old allies to question America’s commitments.
...
The U.S. departure from the Paris Agreement also creates a far-reaching leadership void that none other than our chief economic rivals will swiftly fill.
The renewable energy industry will reach a value of $6 trillion dollars in the coming decades, yet the Trump administration seems poised to forfeit America’s global lead in the industry to China.”
Other Snippets from the Right
How Trump is smashing Obama’s legacy with decision to exit Paris climate deal
Washington Times
"Mr. Obama had declined to submit the agreement to the Senate for ratification as a treaty, arguing it was a presidential accord that didn’t require approval. It would have likely been rejected had he submitted it, which would have been an embarrassing defeat.
The former president also failed to win passage in Congress of a greenhouse gas control scheme, forcing him to try to constrain the U.S. economy through executive branch regulations instead. Mr. Trump has already begun to unravel those regulations, making it unclear how the U.S. would achieve its Paris targets even if it did remain in the accord.
Sen. Mike Lee, who advocated for a full withdrawal from the climate agreement, said that binding the U.S. to an international agreement was a bad idea because other countries will not uphold their end of the agreement.
'When the United States commits to something, it abides by the rule of law. When other countries do the same, it doesn’t necessarily have the same effect,' the Utah Republican said on MSNBC.
'When we tie ourselves to an agreement internationally, we know that other [parties] might not abide by their limits. When we ourselves tie them to it, we know that we will to ours. I’d hate to see us harm our own economy by agreeing to something that other people, who we agree with, aren’t going to follow.'”
Snippets from the Left
Trump’s withdrawal from Paris is a major blow to the American-led global order
Vox.com
"While the president cast the Paris agreement as fundamentally unfair to the United States - 'at what point does America get demeaned, at what point do they start laughing at us' - it actually is part of a web of interconnected agreements that sustain America’s dominant global position in the world. Isolating the US in this fashion sends an extraordinarily strong signal to other major powers that the US cannot be trusted to act on its international commitments, or even to work within international organizations at all.
Washington depends on other countries trusting it to stay in agreements to maintain agreements that preserve American strength. America’s status as sole superpower persists in part because other powerful countries, like France and Germany and Japan, think that American leadership is in their best interests. Every time Trump suggests these countries can’t count on the US anymore - through actions like pulling out of Paris and insulting NATO allies in his foreign trip - he threatens the very foundations of America’s global power.
'It’s death by a thousand cuts - and I don’t know what cut we’re at,' says William Wohlforth, an international relations professor at Dartmouth College."
Snippets from the Center
Trump announces U.S. withdrawal from Paris climate deal
Politico
"President Donald Trump announced Thursday that he will exit the Paris climate agreement, delivering the news in a Rose Garden speech loaded with the 'America First' rhetoric of his presidential campaign.
Trump said he'd be willing to re-enter an international climate deal if he could secure better terms for the United States — although France, Germany, Italy and the United Nations immediately poured water on the idea of renegotiating the 196-nation Paris accord, and one European official called it a 'Trumpian ruse.'
Repeatedly, Trump made it clear that he had no interest in remaining part of a deal that he considered harmful to the U.S., regardless of what the rest of the world might think.
'I was elected to represent the citizens of Pittsburgh, not Paris,' he said to applause from the crowd, which included conservative activists who had pushed for him to exit the agreement."
Discover more on this topic on AllSides.
Tags:
Story of the Week
Donald Trump
Paris Climate Accord
Paris Agreement
Climate Change
Environment