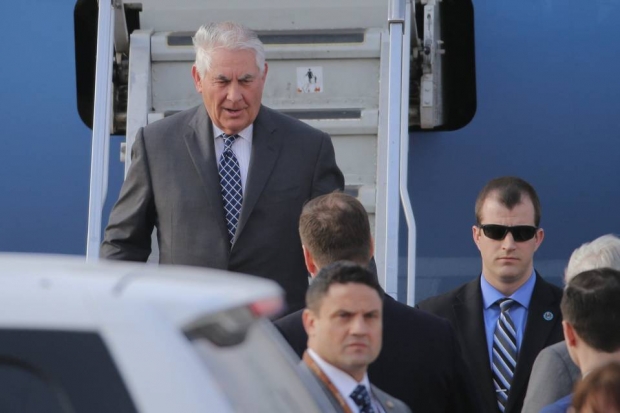 After Syrian President Assad allegedly carried out a chemical weapons attack on his own people last week, Donald Trump unleashed a missile strike on a Syrian air base the night of April 6th. Since then, Russia has condemned the attacks but accusations are swirling that Putin had prior knowledge of the attack. Secretary of State Rex Tillerson arrived this week in Russia on a previously scheduled trip, but meetings with top Russian diplomats have now centered around the strike in Syria.
Have you taken the latest Blind Bias Survey yet? Help us keep our source ratings updated by taking this short survey.
See other news featured by AllSides such as North Korea Defiant, Spicer’s Hitler-Assad Comments, Church Bombings in Egypt and the latest AllSides News.
Snippets from the Left
What's Trump's plan for Syria? Five different policies in two weeks
The Guardian
"For years, Trump advocated against intervention in Syria’s war, except to attack the Islamic State militant group in a related but separate conflict. That policy seemed to end on Thursday, after the chemical weapons attack on Khan Sheikhoun on 4 April. Yet almost as soon as Trump ordered retaliatory strikes on a Syrian airbase from which the US said the regime had launched the chemical attack, his aides suggested that the one-off strike had satisfied US objectives.
Until they contradicted themselves again.
It may not be clear what the US policy toward Syria actually is, including to senior policymakers whose divergent and even contradictory statements have overlapped with one another. But here, at least, is what they have said."
Snippets from the Center
U.S. Says Russia Tried to Cover Up Syria Sarin Attack
Wall Street Journal
"Senior White House officials accused Russia of trying to cover up the suspected Syrian chemical attack last week, adding that the U.S. has concluded the Syrian military used banned sarin gas in the assault.
...
The accusations, leveled shortly after Secretary of State Rex Tillerson arrived in Moscow for high-level talks, were certain to escalate tensions that already had been heightened after the U.S. struck a Syrian air base last week.
President Donald Trump ordered the strike in response to Bashar al-Assad’s suspected deadly chemical weapons attack on April 4, and Mr. Tillerson had ramped up efforts to pry Russia away from its support of the Syrian president."
Snippets from the Right
Rex Tillerson: Russia must choose between Assad and the U.S.
Washington Times
"U.S. Secretary of State Rex Tillerson issued an ultimatum to Russia on Tuesday: Side with the U.S. and likeminded countries on Syria, or embrace Iran, militant group Hezbollah and embattled Syrian leader Bashar Assad.
As he embarked on a trip to Moscow following urgent meetings in Italy with top diplomats, Tillerson said it was unclear whether Russia had failed to take seriously its obligation to rid Syria of chemical weapons, or had merely been incompetent. But he said the distinction 'doesn’t much matter to the dead.'
'We cannot let this happen again,' the secretary of state said."
Discover more on this topic on AllSides.
Tags:
News
Story of the Week
Syria
missile strike
Donald Trump
Vladimir Putin
Rex Tillerson