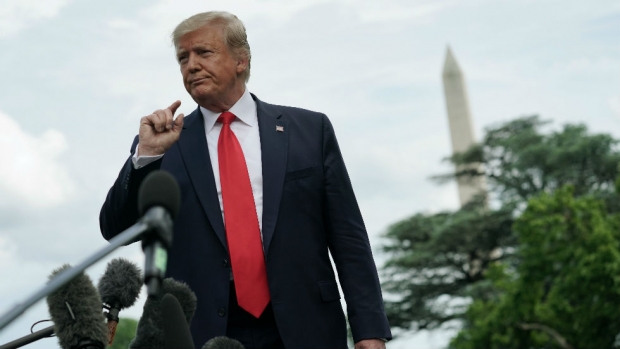 President Donald Trump announced on Twitter that he called off a military strike against Iran, which was planned in response to reports that the country shot down an unmanned U.S. drone.
The strike would have killed an estimated 150 people, a result Trump said was "not proportionate" to Iran's actions. In response, many argued against military intervention in the country, while some others said it is an option that needs to be carefully considered. Opinions also diverge on who is to blame for the escalated tensions: Some say the president destabilized the area when he pulled out of the Iran Deal, while others argue that the deal emboldened Iran and that, in turn, he has set the right tone against an aggressor.
Check out some other big stories this week: House Committee Hears Testimony Regarding Reparations, Left and Right Divided Over Harvard's Decision to Rescind Kyle Kashuv's Admissions Offer, and Supreme Court Rules That The Peace Cross Can Remain.
Want to feel less anxious about the state of the world? Try diversifying your online news sources. Visiting AllSides may be good for your mental health: A study found that people who actively diversified their online news feeds by interacting with people and content that contained different points of view also reported lower levels of anxiety.

Trump Says He’s ‘In No Hurry’ to Confront Iran
Wall Street Journal
"The president said he was in 'no hurry' to confront Iran but said the country “can NEVER” have nuclear weapons.
Expanding on his decision in an NBC interview later Friday, Mr. Trump said: 'I thought about it for a second, and I said, ‘You know what, they shot down an unmanned drone. And here we are sitting with 150 dead people...And I didn’t like it. I didn’t think it was proportionate.'"
Trump says he aborted retaliatory strike to spare Iranian lives
Reuters
"The drone incident aggravated fears of a direct military clash between the longtime foes and oil prices rose more than 1%to above $65 per barrel on Friday due to worries about possible disruptions to crude exports from the Gulf."
Report: Iranian officials say Trump warned them attack was imminent
The Hill
"Iranian officials said Friday that they were warned by President Trump to expect an imminent attack shortly before the U.S. ordered forces preparing a tactical strike on the country to stand down."

Trump’s Iran reversal exposes one of his most dangerous lies
Washington Post Opinion
"We should hope Trump really is reluctant to go to war, and that this reluctance will prevail. But the terrible thing here is that, despite the story Trump told about elite failure, the Iran deal was one case in which international elites actually did set up a framework that likely would have averted senseless, costly foreign quagmires. In other words, here they got a very big thing right."
Attacking Iran Is Congress’s Call
The New York Times Editorial Board
"It’s now President Trump who faces a crisis in credibility — over the wisdom of abandoning nuclear diplomacy in favor of confrontation; over the legality of using the 2001 terrorist attacks as a legal justification for another conflict in the Middle East; over the morality of enabling a conflict in Yemen, which the United Nations calls the world’s worst man-made humanitarian disaster. Most concerning, despite his stated aversion to entering another war, he shows little sign of having learned a central lesson of the past two decades of American military action: that it is easy to start conflicts and impossible to predict how they might end."
How Donald Trump created one hell of a mess with Iran
CNN Opinion
"The shooting down of a US military drone by Iran on Thursday emphasizes that the conflict between the United States and Iran is deepening.
It's a crisis that President Donald Trump predictably provoked by pulling out of the Iranian nuclear deal just over a year ago -- with no real Plan B beyond imposing ever-tougher sanctions on the Iranian regime."

U.S. Holds All the Cards in the Showdown with Iran
National Review
"The Iranian theocrats despise the Trump administration. They yearn for the good old days of the Obama administration, when the U.S. agreed to a nuclear deal that all but guaranteed future Iranian nuclear proliferation, ignored Iranian terrorism and sent hundreds of millions of dollars in shakedown payments to the Iranian regime."
Trump Explains Why He Aborted Airstrikes On Iran, Which Underscores Something The Anti-Trump Masses Will Ignore
Townhall
"Trump halted these airstrikes because the loss of life among Iranians was not proportional to the destruction of the U.S. drone. Some would argue that’s responsible. That’s how a superpower should act. It’s pretty much everything that was discussed in this episode of The West Wing if we want a popular culture example when the fictional president asks what's the virtue of a proportional response.”
Rep. Adam Kinzinger: Iran has crossed a line – Here’s how US can respond forcefully without starting a war
Fox News Opinion
"The U.S. military can end this desperate escalation by Iran pretty quickly, and while that’s not what we want to do, the military option must remain on the table. I certainly hope the military operation scheduled in retaliation was not called off because of a change in mind, but rather because of a tactical need. In 2013, then-President Obama notoriously canceled a strike on Syria and the ramifications from that decision are still being felt."
Discover more on this topic on AllSides.
Iran, US Military, Donald Trump, Iran Deal, Story Of The Week, News