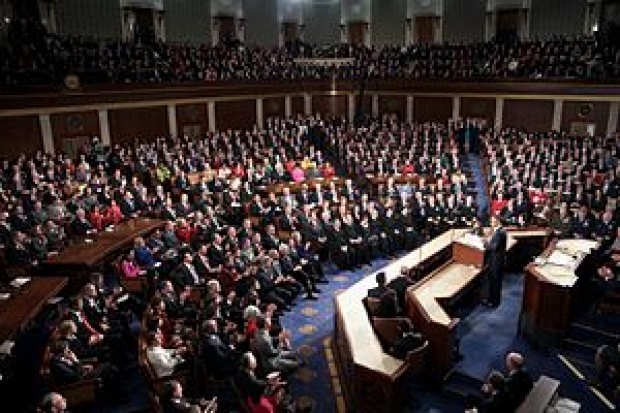 Last night the nation heard President Obama's sixth State of the Union speech. He talked about the economy, climate change, education, closing Guantanamo, ISIS, Iran, energy and infrastructure, Ferguson, the middle class, and "a better politics… where we debate without demonizing each other." And, naturally, there was plenty of debate about what he had to say when the speech was over.
Snippets from the Left
Obama Demands 'Better Politics' of Congress to Lift Middle Class
NBC News
"The president was notably upbeat, highlighting positive economic news and occasionally ad-libbing beyond his prepared remarks...
Under Obama's plan, which is certain to be blocked in the GOP-led Congress, tax hikes on the wealthy would help finance tax breaks for middle-income Americans, including a $500 boost for families with two working spouses and a tripling of the child care tax credit.
Other proposals the president laid out included a push for more paid sick leave and a free community college education for qualified students."
Snippets from the Right
What Obama didn’t say: Address skips over debt, entitlement crisis
Fox
"The president on Tuesday night pitched an ambitious package of tax hikes for some, tax cuts for others, education aid and other government protections...But absent from Obama's address was any mention of the national debt.
And, in a break from past addresses, he made no call for reforming entitlements like Social Security and Medicare, the latter being a major driver of deficits and debt. Instead, he pointed to those programs as models for how the government protects Americans from “adversity” and examples of the kind of “middle-class economics” he supports."
Snippets from the Center
In State of the Union, Obama Makes Middle-Class Pitch
Wall Street Journal
"President Barack Obama on Tuesday night declared an end to the U.S. economic crisis as he made the case to Americans, and a skeptical Congress, that now was the time to focus on resolving the most stubborn impediment to a full-fledged recovery: lagging progress among the middle class.
…
But Mr. Obama’s economic agenda, which hinges on raising taxes on high-income Americans to fund initiatives to benefit those at lower income levels, faces a deeply uncertain path in a Congress that for the first time in his presidency is fully controlled by Republicans."
Discover more on this topic on AllSides.
State Of The Union, News