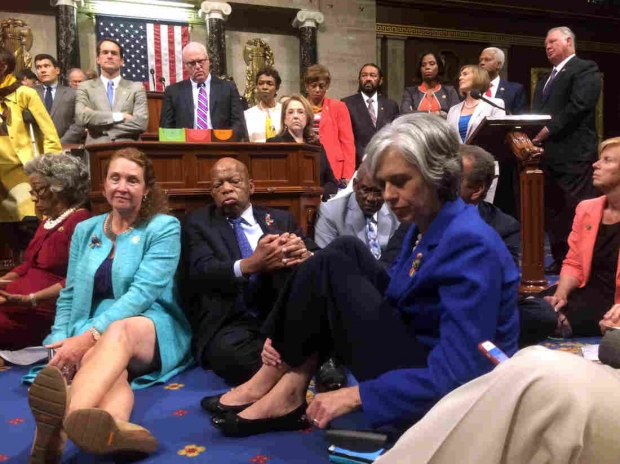 On Wednesday, a group of House Democrats staged something new: a sit-in to protest a lack of action on gun control. The 25-hour occupation caught the attention of social media. By sitting in, were the Democrats standing up for something that most Americans support - or was it a time-wasting stunt against crucial gun rights? Let’s have a look at a cross-section of coverage in the media today.
See other news featured by AllSides such as Court Tie Blocks Obama Immigration Plan, Brexit Or Not, Trump Faces Cash Crunch and the latest AllSides News.
We also have a new article in our Missing Perspectives series for guest writers. This week we have an article by Beth Ballentine titled Are Gender Neutral Bathrooms Our Priority?
Snippets from the Right
Democrats End Gun Control Slumber Party, Fold Up Their Occupation Of House Floor
Town Hall
“Speaker Paul Ryan aptly noted that this was nothing more than a publicity stunt and a fundraising campaign. He also said these antics degrade the institution. Regardless, for now, this occupation is over. Hill Democrats seized the floor around 11:30 a.m. yesterday and remained throughout the night. Sens. Bernie Sanders of Vermont and Elizabeth Warren (D-MA) joined their colleagues in an act of solidarity yesterday. Did it bring attention to the issue? Yes. Was it also a colossal waste of time over a bad gun control bill that strips Americans of their constitutional rights without due process of law? Absolutely. House Republicans quickly adjourned all business this morning.”
Snippets from the Left
OPINION: Democrats’ sit-in is a justified act of civil disobedience
Washington Post
“It is disruptive but civil and nonviolent. No individual outbursts of hatred and anger, no conspiracy theories — just a plea for common sense on a matter of signal importance to the country and an opportunity for democratic accountability. The media now has a story other than the presidential horse race, one that might actually resonate with regular folks.…The agenda is modest: keeping automatic weapons out of the hands of those who should not have them. It is well short of the ambitious agenda passed (to the Australian public’s great benefit) by a conservative Australian government in 1996 in the aftermath of a mass killing. Public support is unusually high. Civil disobedience has heightened its salience. Republicans know they are holding a weak hand in the election, one the National Rifle Association cannot strengthen. Sixty votes in the Senate, 218 in the House are not beyond reach. If not this year, maybe next.”
Snippets from the Center
Democrats end guns sit-in
Politico
“The sit-in took on a life of its own, dominating social media and cable networks late into the night Wednesday, bringing Twitter fame for some Democratic back-benchers and stoking an impromptu gathering of supporters outside the Capitol, several of whom stayed overnight.
But Democrats, frustrated by inaction following the Orlando nightclub shooting that killed 49 people two weeks ago, leave for recess no closer to voting on gun control bills in the House. And Republicans, angered by the daylong disruption, may be even more galvanized to stonewall the issue.
House Speaker Paul Ryan (R-Wis.) has promised not to acquiesce to Democratic demands for votes on two bills — one barring people on the “no fly” list from buying guns and another expanding background checks — not now or when lawmakers file back into the Capitol July 5.”
Discover more on this topic on AllSides.
News, Story Of The Week, Gun Control, Gun Legislation, US House, US House Democrats, Sit-In