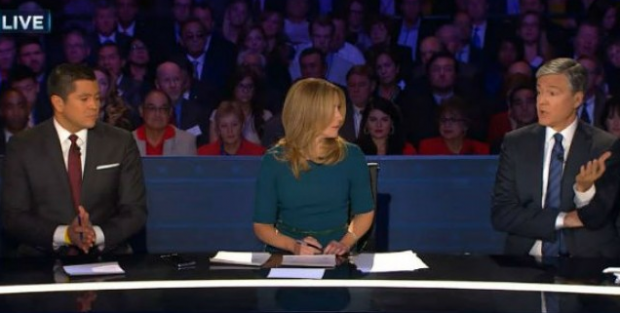 This week, in the third GOP debate, tax plans, the debt ceiling, social security, and immigration were among the subjects discussed. All ends of the media spectrum have been reporting that the biggest clashes were between the moderators and candidates, and we’re highlighting what’s being said about that here. By the way, if you missed the debate, NPR offers a written play-by-play summary here.
See other news featured by AllSides such as What Paul Ryan Might Face, House Leadership Clinches Budget Deal and the latest AllSides News.
Snippets from the Right
'Not a cage match': Cruz, others scold GOP debate moderators

“Getting a strong reaction from the crowd -- and from others beyond the debate -- Cruz scolded the moderators for their questions, which included one to Donald Trump asking if he's running a ‘comic book’ campaign.
‘The questions that have been asked so far in this debate illustrate why the American people don't trust the media,’ Cruz said. ‘This is not a cage match.’
…
At one point, Christie called moderator John Harwood ‘rude,’ even by Garden State standards, after he interrupted him. Moments earlier, Christie also mocked a question about whether fantasy football should be considered gambling.
‘Are we really talking about getting government involved in fantasy football?’ Christie said. ‘We have $19 trillion in debt. We have people out of work. We have ISIS and Al Qaeda attacking us. And we're talking about fantasy football? Can we stop? ... Enough on fantasy football. Let people play, who cares?’”
Snippets from the Left
Peace Breaks Out Among the Republican Candidates
New York Magazine
“The debate allowed the candidates mostly to agree with each other and against the moderators, whom they especially resented for their intrusions of reality. A recurring trope was for candidates, when presented with uncomfortable facts, to simply deny them. (Becky Quick: ‘You'd have to cut — you'd have to cut government about 40 percent to make it work with a $1.1 trillion hole.’ Ben Carson: ‘That's not true.’)
…
What the candidates agreed upon above all else is that any intrusions into their alternate reality represent a gross offense by the liberal media. Media-bashing provided the most popular subject for contemporaneous sermons, a foolproof way for candidates to bat down any inconvenient query and win wild applause from the partisan crowd. The currents of anti-Establishment rage that had seemed to roil the debate were, at least for one night, drowned out by satisfied unity.”
Snippets from the Center
Republican presidential candidates criticize debate process
USA Today
“Another candidate, Mike Huckabee, told MSNBC that the debates have become like ‘a game show.’ The entire process ‘has gotten out of control and it has become a TV show rather than a thoughtful process of selecting someone who has the temperament and judgment’ to be president, Huckabee said.
...Republican Party chairman Reince Priebus said moderators asked too many ‘gotcha’ and ‘low blow’ questions.’I’m proud of our candidates for standing up to a pretty hostile environment,’ Priebus said.
The questioners did have their defenders. Kasich told MRCTV they did a ‘good job,’ and the debate ‘wasn’t a circus like we’ve had in the past.’
CNBC spokesperson Brian Steel responded: ‘People who want to be President of the United States should be able to answer tough questions.’”
Discover more on this topic on AllSides.
News, GOP, Presidential Debate, CNBC