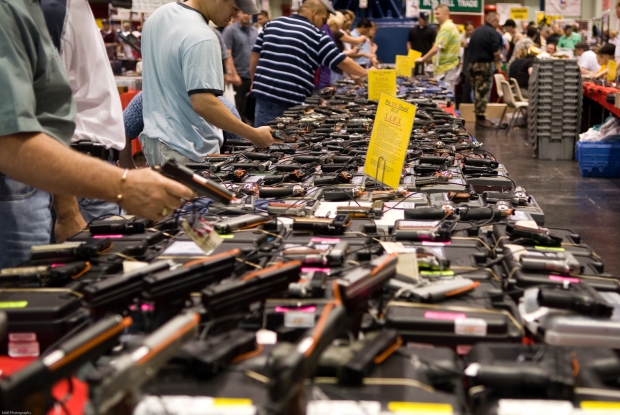 On Tuesday, President Obama, with a rare show of tears, issued an executive order on gun legislation. The central piece of the measure seeks to close the “gun show loophole,” which exempts most small sellers from doing background checks and keeping sales records. Strong opinions from the Right and the Left ensued: is this modest gun safety progress or an attempt to erode constitutional gun rights? Let’s see what different sides have to say about all this.
See other news featured by AllSides such as Global Markets Tumble, North Korea Claims Hydrogen Bomb Test, Oregon Militia Standoff and the latest AllSides News.
Snippets from the Left
OPINION: The gun lobby’s con game will come to an end
E.J. Dionne Jr., Washington Post
“But as soon as the weapons extremists have said that sane action is useless in the face of so many guns, they turn around and assert that those who support universal background checks and other small steps are secretly in favor of gun confiscation. Wait a minute: In one breath, they are implying, against all their other assertions, that the problem really is too many guns; in the next, they are condemning those who propose any regulations as would-be despots who want to disarm the country — the only thing their own rhetoric suggests would make a real difference. Welcome to a new philosophical concept: circular illogic.
…
Bullies are intimidating until someone calls their bluff. By ruling out any reasonable steps toward containing the killing in our nation and by offering ever more preposterous arguments, the gun worshipers are setting themselves up for wholesale defeat. It will take time. But it will happen.”
Snippets from the Right
OPINION: President Obama wants to disarm America
Fox News
“The president will purportedly bypass Congress and crack down on small scale gun sellers. Fox News reports the plan would require gun sellers to order background checks on prospective buyers and tighten laws for gun sales to those who have committed domestic-abuse offenses.
If the White House really wants to crack down on gun violence -- maybe they should enforce the laws that are already on the books. But that's not the point. This president ultimately wants to disarm the nation.
The primary reason our Founding Fathers wrote the Second Amendment was to protect all the other amendments.
Just after the Muslim terrorist attack in San Bernardino the Washington Post found that 53 percent of voters oppose a ban on assault weapons -- a record high.
The American people seem to understand what the president does not -- guns keep our families safe. So instead of declaring war on law-abiding gun owners  -- maybe the president ought to declare war on the true threat facing our nation -- radical Islam.”
Snippets from the Center

CNN
“Now, Obama is back to try again, but even the President admits the measures are limited in scope.
‘We maybe can't save everybody, but we could save some. Just as we don't prevent all traffic accidents, but we ... try to reduce traffic accidents,’ Obama said Tuesday. ‘As Ronald Reagan once said, if mandatory background checks could save more lives, it would be well worth making it the law of the land.’
And with prospects bleak for any significant action in Congress, Obama's latest effort may be more about making peace with the relatives of the dead and his own conscience as the result of a realistic assessment that change is possible now.”
Discover more on this topic on AllSides.
Gun Control, Gun Legislation, Executive Order, News