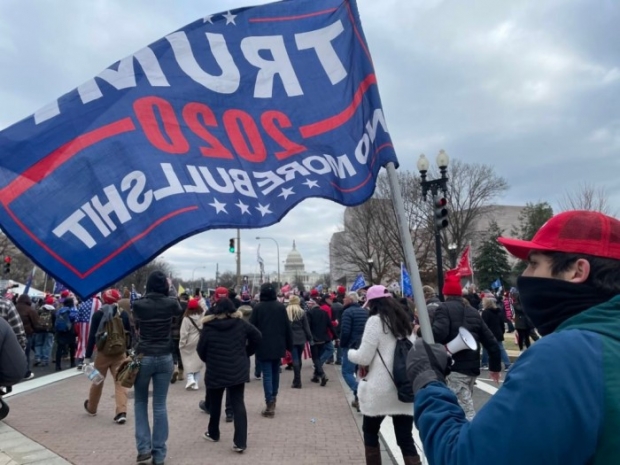 Congress certified President-elect Joe Biden's victory early Thursday after tallying states' Electoral College votes. Shortly after, President Donald Trump released a statement saying "there will be an orderly transition" on Jan. 20. The conclusions followed chaos in Washington D.C. Wednesday, as Trump supporters breached the U.S. Capitol building and forced an abrupt adjournment of the vote count. Four people died during the mayhem, including one woman who was reportedly shot by Capitol police. The building was cleared and secured by Wednesday evening. People who breached the Capitol were upset by what they believe is a stolen election, echoing Trump's words.

Coverage of the events was similar across the spectrum, focusing more on the violence than the actual certification. Many sources on all sides called the events riots, framing them as an assault on American ideals. Left-rated sources often painted Trump as worthy of blame. Right-rated outlets sometimes more on Trump's requests for supporters to avoid violence and on his concession.

On the Blog: Before we totally leave 2020 in the rearview mirror, let's reflect on how media bias affected the year's biggest stories; and in what may come as a surprise, many Democrats and Republicans actually agree on aspects of police reform.

More from AllSides: Balanced news is now available on your mobile device: Download the AllSides mobile app today for iOS and Android; and you can support our work and mission by becoming a sustaining member of AllSides. Sustaining memberships allow you to read AllSides ad-free.

"Pence struck a decidedly different tone than President Trump, who responded to the violence in a video message posted to Twitter in which he urged his supporters to “go home in peace” while repeating his baseless claims that the presidential election was fraudulent."

Is this America? A breach in peaceful transition of power.

"The U.S. has been riven by actual warfare in its past. But it is now 2021, not 1860, and the resurgence of some of the nation’s dark passions is a stark reminder that democracy and peaceful politics do not occur automatically, and must be cultivated and defended over and over again."

How a Pro-Trump Mob Stormed the U.S. Capitol

Shouting demonstrators mobbed the second-floor lobby just outside the Senate chamber, as law enforcement officers placed themselves in front of the chamber doors. A woman who was shot by a police officer inside the Capitol was later pronounced dead at a local hospital, and D.C. police said an additional three people died from medical emergencies on the Capitol grounds.

"On one of the most frightening days in American history, marauding thugs marched from an incendiary Trump rally to storm the Capitol. Their aim was to stop lawmakers finalizing President-elect Joe Biden's victory ahead of his January 20 inauguration. But the bedlam, which saw rioters smash windows, lay siege to lawmakers and reach the House and Senate chambers, had the opposite effect, hastening the moment of final repudiation for the President and his baseless claims of a stolen election."

"Legislators on Wednesday questioned how protesters were able to gain access to the U.S. Capitol, saying the actions by U.S. Capitol Police officers would be examined...The breach happened because of 'enormous strategic and planning failures by the Capitol Police, by the sergeant at arms and anybody else who was a part of coordinating this effort.'"

"Rioting is the fault of rioters. But they had just been told by the president that a “landslide” election was being stolen from him. Many people trust Donald Trump. They have been lied to by the media for years. They have been smeared as racists by elites and peers alike. With no other sources to turn to, they turn to the man who seems to hear them. He took advantage of that to lessen the blow of a narrow reelection loss."