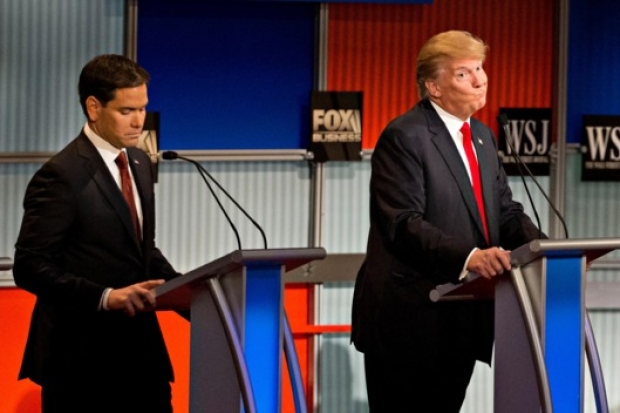 This week brought us the last GOP debate until December, when primary season kicks into gear. This debate was significant because across the media it has been described as more substantive, giving viewers more information about the candidates and their proposals. So today we provide you with a multi-perspective view of the opinions and analysis that surfaced after this latest presidential candidate debate.
See other news featured by AllSides such as Kurds Launch Offensive, Ruling Against Obama Immigration Plan, Russia Accused of Doping and the latest AllSides News.
Snippets from the Right
Analysis: Republicans Get Wonky, Actually Debate Each Other on Fox Business
Town Hall
“Trump's tough talk on illegal immigration wasn't a hit with many attendees in the hall (he was booed several times over the course of the evening for criticizing other candidates), but I suspect he benefited from a protracted ‘amnesty’ exchange with John Kasich and Jeb Bush.
…
One of the most fascinating bits of the debate was the tete-a-tete between Rubio and Rand Paul.  Their sparring started over taxes, then spilled into foreign policy.  Each man's campaign and supporters declared victory online, and not without reason.  Paul reminded libertarian-leaners and non-interventionists that he hasn't lost his mojo, and that he's more than willing to mix it up with his more hawkish colleagues.  Rubio cited the federal government's constitutional imperative to defend America's people and interests, and warned against the consequences of receding American leadership in the world.”
Snippets from the Left
Opinion: Wow, More Terrifying Than TrumpNew York Times Op-Ed
“‘As you noted, I have rolled out a bold and simple flat tax: 10 percent for every American that would produce booming growth and 4.9 million new jobs within a decade,’ said Ted Cruz. In a perfect world, someone would have jumped up and yelled, ‘Say what?’ since Cruz was talking about a potential $3 trillion budget hole.
Later, Cruz volunteered that he’d impose sharp budget cuts, including the total elimination of five major agencies — only four of which he could remember…
Carly Fiorina kept touting her three-page tax code. Not a three-page tax form — three pages of laws to cover all the taxes paid by every individual and business in the country. She mentioned the three-page code four times during the debate, and not once did anyone say, ‘Carly, what the heck are you talking about?’”
Snippets from the Center
Republican debate: CNN's Reality Check team vets the candidates' claimsCNN
“Reality check: Cruz on impact of immigration on wages in the United States.
…While most American workers see no difference in their wages as a result of immigration, the specifics of Cruz's claim are accurate. Cruz said ‘we're going to drive down the wages for millions of hard-hard-working men and women’ and there are more than 10 million Americans in the class most vulnerable to wage pressures. …VERDICT: True
…
Kentucky Sen. Rand Paul alleged during the debate that income inequality ‘seems to be worst in cities run by Democrats, states run by Democrats and counties currently run by Democrats.’
A look of Census data provides a clear picture of where the gap between rich and poor is greatest in the United States, and it's not as cut-and-dry as Paul suggests when it come comes to political responsibility. …VERDICT: False.”
Discover more on this topic on AllSides.
News, GOP, Debates