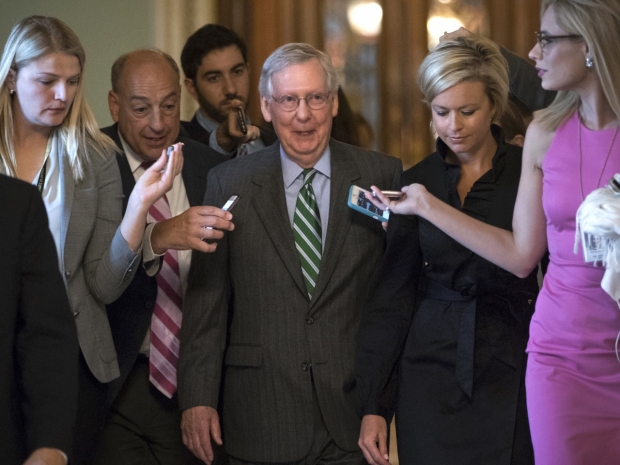 After releasing the Senate healthcare bill last week, Senate Majority Leader Mitch McConnell delayed the vote until after summer recess. Several Republican Senators have decided against supporting the bill and with the Democrats unified in opposition, the future of the bill is uncertain.
One of our teacher advisors wrote an article for Huffington Post this week about the work he's done connecting his Massachusetts students with their peers in Alabama: Connecting Students Across the Partisan Divide. Interested in trying something similar? Sign up for our Fall launch of Mismatch!
AllSides has partnered with a nonpartisan coalition of 25 organizations on a powerful new survey “What’s Your American Dream?” to get your voice heard in Washington. Week 5 is on Services. Please, take the survey now, and share this link with your nearest and dearest!
Snippets from the Right
Senate leaders consider Cruz option to avoid Obamacare insurer requirements
Washington Examiner
"Republican leaders are strongly considering an amendment from Texas Sen. Ted Cruz to let insurers sell plans that don't comply with Obamacare's insurance mandates as long as they sell some plans that do.
The idea behind the amendment is to address conservative concerns that the bill doesn't repeal enough of Obamacare's insurer mandates that conservatives say are driving up premiums. However, it is not clear how the amendment would spread risk among the people buying the Obamacare plans and the likely cheaper plans that don't comply with Obamacare.
Senate Majority Leader Mitch McConnell is said to be weighing the Cruz amendment instead of one in the House bill that lets states waive key Obamacare insurer mandates, according to a source familiar with the discussions.”
Snippets from the Center
Conservatives seek changes to Senate healthcare bill
The Hill
"Conservative senators seeking changes to the chamber's ObamaCare repeal-and-replace legislation met Thursday with GOP leaders and the Senate parliamentarian.
Sens. Ted Cruz (R-Texas) and Mike Lee (R-Utah) are pushing for a change to the bill that would allow insurers to sell plans that do not comply with ObamaCare’s insurance regulations if they also sell plans that do meet those rules.
They say that change would help win their votes for the legislation, which they currently oppose.
But the proposal has drawn resistance from other Republicans who want to maintain ObamaCare’s protections for people with pre-existing conditions and worry that the change would allow plans to be sold without those protections."
Snippets from the Left
Why is the GOP so terrible at health care?
Salon
"Straddling a mere two-seat majority in the chamber, McConnell had to beat a hasty retreat after a number of his members indicated that they would not support the Senate’s version of the Obamacare repeal bill, officially called the Better Care Reconciliation Act. The cancellation paralleled an earlier move in March by the House GOP leader Paul Ryan to scuttle a vote doomed to fail.
One person who saw all this coming was former House Speaker John Boehner. Out of Congress since the end of 2015 following a conservative attack on his leadership, Boehner told a high-dollar health care industry conference in February of this year that there was no way that Republicans were going to be able to “repeal and replace” the Affordable Care Act.
...
As currently written, either chamber’s bill almost certainly will endanger the party’s senators in purple states. Normally, politicians are loathe to stick their necks out for proposals that are unpopular, even if they agree with them. So why bother?"
Discover more on this topic on AllSides.
Tags:
News
Story of the Week
Senate
Healthcare
Better Care Reconciliation Act