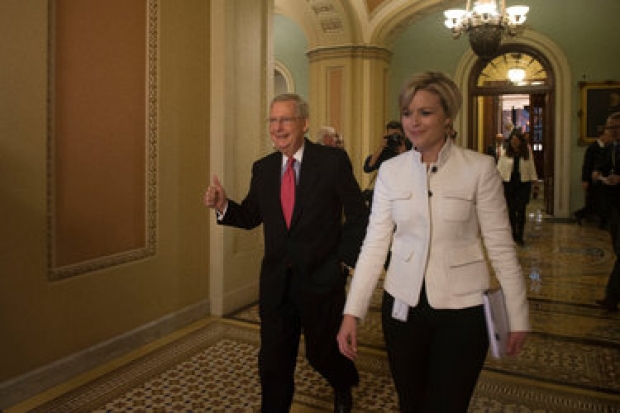 After the filibuster from the Senate Democrats began to protest the nomination of Neil Gorsuch to the Supreme Court, Mitch McConnell invoked the "nuclear option". The nuclear option, which is simply a rules change, was used because Republicans were five votes shy of being able to end the filibuster by normal means. Judge Neil Gorsuch is now expected to be confirmed by a simple majority on Friday.
See other news featured by AllSides such as Nunes Steps Aside, Did Susan Rice Commit a Crime?, Repeal Revival? and the latest AllSides News.
Snippets from the Right
NUCLEAR: Senate GOP Uses Reid Rule to Nuke Dems' Unprecedented SCOTUS Filibuster
Townhall
"Harry Reid's legacy is thus cemented. Democrats' unprecedented filibuster of Judge Neil Gorsuch has been broken under the nuclear option they pioneered in 2013. Every single Republican voted to invoke the Reid Rule, including some who had expressed a strong hesitancy to do so; that's how indefensible Democrats' conduct has been. The Senate will now reach cloture on the nomination with 51 votes, setting up a final confirmation tomorrow. It's over. Neil Gorsuch will be the next Associate Justice of the United States Supreme Court."
Snippets from the Left
The lesson of Gorsuch and the nuclear option: "Neither party has any incentive to compromise"
Vox
"'It is depressing; I'm very depressed,' Republican Sen. John McCain said this week.
'We're going down the wrong path here,' Democratic Sen. Joe Manchin said.
They were both talking about the same thing: the GOP’s potential use of the so-called 'nuclear option' to confirm Judge Neil Gorsuch to the Supreme Court. Senate Republicans will move to a voteThursday on Gorsuch’s nomination.
Senate Democrats are expected to filibuster to block that vote. And in response, the Republicans will likely change the rules of the Senate to eliminate the filibuster for Supreme Court nominations, so all Gorsuch needs is a simple majority of votes to be confirmed.
Senators from both parties are unhappy with this unusual rule change, but it’s almost certainly going to happen anyway."
Snippets from the Center
Senate Eliminates Filibuster for Supreme Court Nominees
Wall Street Journal
"Majority Leader Mitch McConnell (R, Ky.) then triggered a rules change to eliminate the 60-vote threshold on Supreme Court nominees, a move often called the 'nuclear option' because it upends a long-standing Senate tradition.
The move paved the way for Judge Gorsuch to be confirmed Friday by a simple majority, filling the vacancy on the high court left by the death of Justice Antonin Scalia last year. Former President Barack Obama had nominated Judge Merrick Garland to the seat, but Republicans, who hold the Senate majority, declined to consider the nomination.
...
Thursday’s fast-moving developments culminated decades of escalating partisan warfare over presidential nominees and court picks."
Discover more on this topic on AllSides.
News, Story Of The Week, GOP, Nuclear Option, Republican Party, Senate