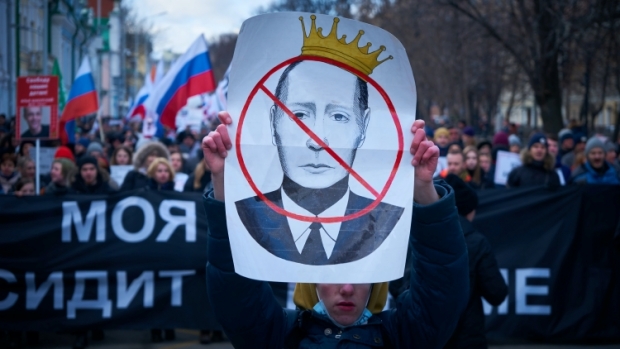 Image by Valery Tenevoy via Unsplash

This piece originally appeared on The Conversation, which AllSides rates as Lean Left. It was written by Victor Peskin, an Associate Professor of Politics and Global Studies at Arizona State University. The writer's bias has not been rated.

There have been mounting calls from Ukrainian and other activists and political leaders to prosecute Russian President Vladimir Putin for war crimes in Ukraine, including authorizing attacks on civilians. There has also been public skepticism that this could actually happen.

History provides some lessons on charging political leaders with war crimes – a legal term that includes attacking and killing civilians during war.

Ukraine already convicted and sentenced three Russian soldiers, in May 2022, for war crimes during the ongoing Ukraine conflict, and it plans to prosecute at least 80 more soldiers. But as a scholar of human rights, conflict and international courts, I think it is important to understand that there has been a mixed record of arresting and prosecuting senior political and military leaders allegedly responsible for atrocities.

The international trial of Serbian leader Slobodan Misolevic in the mid-2000s is one example of how international courts can prosecute war criminals.

Here’s the bottom line: It’s only when leaders like Milosevic fall from power that there is any chance that their governments may arrest and hand them over to international courts for prosecution.

But history also shows that even if Putin is overthrown or otherwise loses power, there’s no clear guarantee that he will ever stand trial before an international court.

There were three major wars in southeastern Europe in the 1990s. In total, approximately 130,000 people died during the wars in Croatia, Bosnia and Kosovo. The rise of nationalism and tension between different ethnic groups triggered these conflicts.

The spark for these wars was kindled in 1991, when Yugoslavia, a former communist republic that once included Bosnia and Herzegovina, Croatia, Macedonia, Montenegro, Serbia and Slovenia, began to split apart.

Milosevic, a Serbian nationalist leader, was one of the most influential politicians in the region. He fueled the regional wars around and after the time of this dissolution.

In 1993, as the war in Bosnia was still being fought, the United Nations Security Council set up a special court, called the International Criminal Tribunal for the Former Yugoslavia, to address crimes committed during the wars there.

This court indicted Milosevic for war crimes and crimes against humanity in 1999 during the the ongoing Kosovo war in 1999. Milosevic’s alleged crimes in Kosovo included a massive ethnic cleansing campaign waged against Kosovar Albanians, the largest ethnic group there. Most of the people who died during this war were Kosovar Albanians.

But Milosevic was still in power when the indictment was issued, and the Serbian government shielded him from arrest.

Milosevic lost a presidential election in late September 2000 but initially refused to give up power. After widespread protests, Milosevic stepped down a week later, and a democratic government took over.

The Serbian government transferred Milosevic to the international tribunal in June 2001.

This happened in the wake of U.S. threats to withhold much-needed loans to Serbia, unless the government turned over Milosevic. Serbia later also arrested other former leaders wanted for war crimes – following intense Western political pressure and assurances by European countries and the U.S. that the government’s cooperation could result in Serbia’s gaining European Union membership.

The international tribunal launched its trial in The Hague, Netherlands, against Milosevic in February 2002. Milosevic faced dozens of charges for alleged crimes he committed in three different wars.

But Milosevic died in prison in 2006, shortly before the end of his trial.

The challenge for international courts

International courts set up by the U.N., like the International Criminal Tribunal for the former Yugoslavia, have a twofold problem. First, these tribunals do not have an actual international police force to carry out arrests.

Governments implicated in their leaders’ alleged crimes also often try to obstruct international courts by not turning over suspects.

The enforcement problem, as my scholarship has shown, can allow a powerful country like Russia to evade arrest warrants from international courts – as long as the suspect remains within the country.

The International Criminal Court, for example, has not been able to persuade the Sudanese government to hand over former president Omar al-Bashir for alleged war crimes committed in Darfur in the 2000s.

A potential playbook for Putin

Milosevic escaped a final verdict and potential prison time with his death.

But his trial still shows that under specific circumstances, international courts can overcome their lack of enforcement powers and bring high-level suspects to trial. International political pressure and incentives often serve a role in this process.

In May 2022, the International Criminal Court – the main international tribunal that prosecutes war crimes – sent its largest-ever team of experts to investigate the situation in Ukraine.

Karim Khan, chief prosecutor of the International Criminal Court, will need to decide whether to target lower-level or midlevel suspects in the military – or to indict top Russian leaders, including Putin.

Some analysts caution against Khan’s aiming too high, too soon, given the court’s poor track record of prosecuting high-level defendants, such as former Côte d'Ivoire President Laurent Gbagbo.

As long as Putin remains in power, it is unlikely that any amount of political pressure or promises will persuade Russia to cooperate with an international court and turn over Putin, if he is indicted.

That could change if Putin ever falls from power.

But much would still depend on the new Russian government and whether Western countries would provide the type of incentives that pushed Serbian leaders to turn against their former political leaders and military heroes.