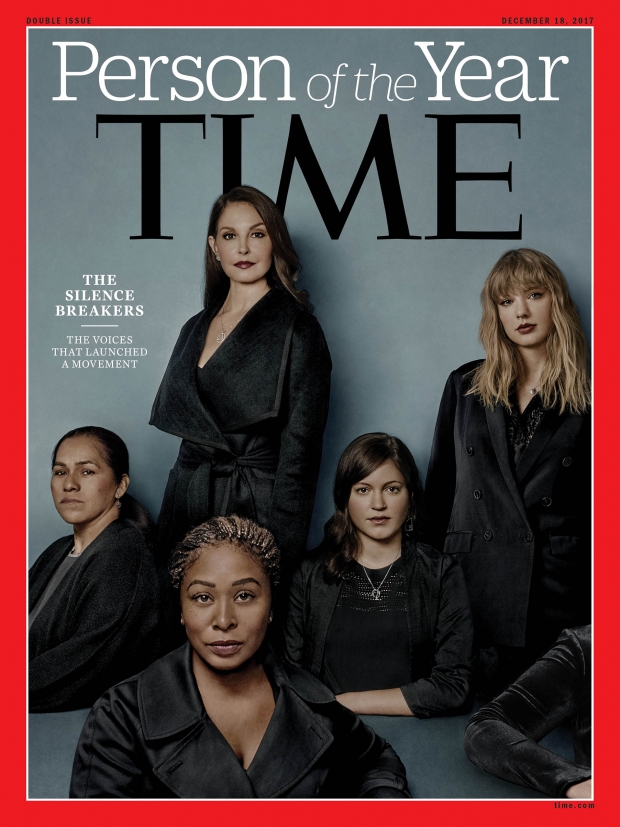 It's been another full week of sexual harassment being in the news. Today Sen. Al Franken (D) announced that he was resigning and yesterday Rep. John Conyers (D) retired from his seat early. Neither have official replacements yet. The upcoming Senate election in Alabama between Trump-endorsed Roy Moore (R) and Doug Jones (D) is one that has been overtaken with accusations of Moore's alleged history with teenage girls. Additionally, among all the negativity in the news, Time Magazine announced their Person of the Year issue this week, featuring the "silence breakers", the women and men brave enough to come forward this year and share their stories of sexual harassment and assault.
Other news from AllSides:
Snippets from the Left
The Silence Breakers
Time Magazine
"This reckoning appears to have sprung up overnight. But it has actually been simmering for years, decades, centuries. Women have had it with bosses and co-workers who not only cross boundaries but don't even seem to know that boundaries exist. They've had it with the fear of retaliation, of being blackballed, of being fired from a job they can't afford to lose. They've had it with the code of going along to get along. They've had it with men who use their power to take what they want from women. These silence breakers have started a revolution of refusal, gathering strength by the day, and in the past two months alone, their collective anger has spurred immediate and shocking results: nearly every day, CEOs have been fired, moguls toppled, icons disgraced. In some cases, criminal charges have been brought."
Snippets from the Right
What Women Can and Should Do About Sexual Harassment
Newsmax
"For the record, sexual assault is not permissible under any circumstances. It doesn’t matter if it’s men groping other men, men taking advantage of women, or whether the offender is powerful, a peer, or complete stranger. If it isn’t consensual, it’s off limits.
On the other hand, consider this: You don’t leave your front door wide open and say, “Why do I have to change when it’s the thief’s behavior that’s the problem!” You don’t walk down a dark alley on the bad side of town alone, leave your keys in the ignition, or taunt street gang members. And you don’t go to a hotel room late at night for a business meeting.
I’m not saying that if you do you deserve to be harassed or assaulted. No, far from it. But neither do I accept the outlook that women are dependent on the law and others to protect them."
Snippets from the Center
After Weinstein: More than 100 high-powered men accused of sexual misconduct
USA Today
"Since the allegations of sexual abuse by Hollywood producer Harvey Weinstein surfaced on Oct. 5, women have been stepping forward to publicly share their stories of sexual misconduct.
Although many of the accusations originally focused on Hollywood, more than 100 high-profile men across industries — including tech, business, politics and media — have since faced claims ranging from sexual harassment to rape."
Discover more on this topic on AllSides.
News, Story Of The Week, Sexual Harassment, Sexual Misconduct