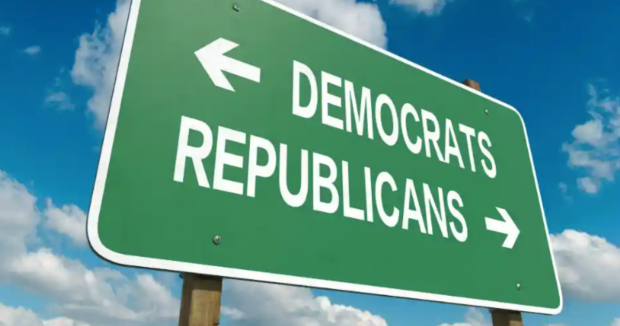 Image by Jane0606 via Shutterstock

This blog is written by Eric Loepp – Associate Professor of Political Science and Director of the Learning Technology Center, University of Wisconsin-Whitewater, and was originally published on DividedWeFall.org (Mixed media bias rating).

By Eric Loepp – Associate Professor of Political Science and Director of the Learning Technology Center, University of Wisconsin-Whitewater

Political scientists often distinguish between elected officials and individual citizens in conversations about polarization, as their behaviors have historically differed. To better understand polarization in Congress, scholars have designed sophisticated methods to measure the ideologies of legislators. One of the most widely used methods is the “DW-NOMINATE” method, which calculates the relative ideological positions of members of Congress by analyzing political choice data. DW-NOMINATE scores reveal that in the periods during and immediately after World War II, the difference in ideology between the median Democrat and the median Republican in Congress did not differ nearly as much as they do today. Democrats were, on average, modestly left of center, and Republicans were, on average, modestly right of center.

Yet over time, DW-NOMINATE scores have shifted. Figure 1 from the Pew Research Center demonstrates how much this divide has increased in recent decades. Democrats have drifted somewhat to the political left, and Republicans have drifted quite a bit to the political right. Today, ideologically moderate Congresspeople – especially Republicans – are increasingly rare. Pew estimates only about two dozen ideological moderates remain in Congress. Whereas there used to be many Republicans who were less conservative than the most conservative Democrat, and vice versa, there is no overlap today. That is, the most liberal Republican is still more conservative than the most conservative Democrat. 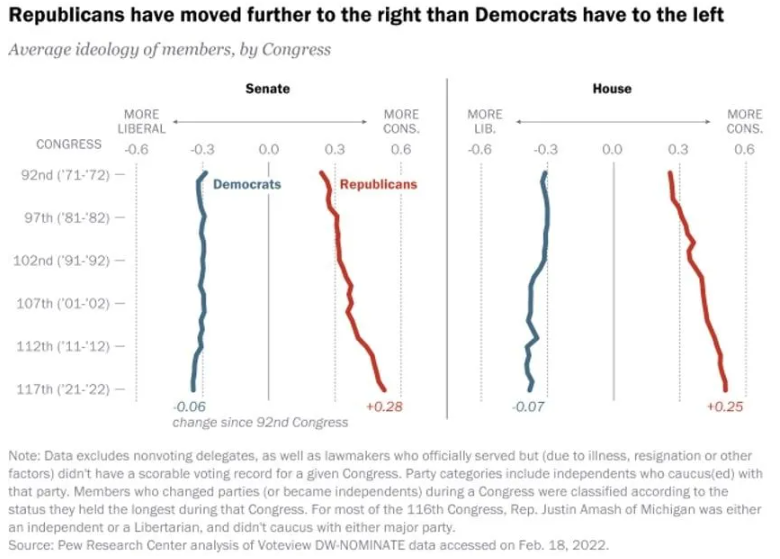 Polarization in the Electorate

Does a polarized Congress mean that the voters are polarized, too? Not necessarily. For many years, there was little evidence that the American people were committed to a coherent ideology. To be sure, many individuals felt a close attachment to and consistently supported a particular political party, but for much of the second half of the 20th century, most people were not particularly stable in their ideological views. Consequently, ideological polarization was not as dramatic among the people as it was among their elected leaders.

There is an important caveat to this point, though. Politically sophisticated individuals historically have more consistently understood and evaluated politics through traditional notions of left-right ideology. Among the segment of the electorate that is politically elite, polarization has always been more common.

Political sophistication has become a critical piece of the polarization discussion today, especially when compared to the previous century. Most individuals nowadays achieve at least a basic level of sophistication necessary to meaningfully distinguish between “liberal” and “conservative” in political life. This is because the political parties today are highly sorted, liberals affiliate with the Democratic Party, and conservatives align with the Republican Party. The absence of prominent liberal Republicans and conservative Democrats in public life – for all of its drawbacks – does have the side effect of making it easier for ordinary citizens to distinguish between the parties. Today, many voters, even if they are not formally educated about or frequently engaged in politics, can more easily think about and interpret political activities in ideological terms. Consequently, public opinion research shows the median Democratic citizen and the median Republican citizen have been inching further and further apart since the early 2000s, though there remains an ongoing debate among political scientists about the precise nature and scope of ideological polarization among the electorate.

Polarization has traditionally been conceptualized in policy terms, such as support for a single-payer healthcare system or a tax cut. Yet there is another source of division in American politics that has been on the rise in recent years: affective polarization. This polarization stems not from policy disagreements, but from hostility towards political outgroups. Republicans and Democrats increasingly dislike and distrust each other. Affective polarization is principally the result of Americans sorting more and more into political tribes. Affiliation with a political team is increasingly linked to one’s sense of identity. When someone’s sense of identity is challenged, they tend to interpret events through the lens of “us” versus “them.” In that mode of thinking, bipartisanship is not desirable and may even be perceived as a betrayal of the team.

Political scientists track affective polarization by measuring the difference between feelings people exhibit toward their party and other political parties. One way they do so is by using a zero (“extremely cold”) to 100 (“extremely warm”) scale. Figure 2 shows that in the early 1980s, people typically gave their own party about 75 out of 100 and the other party around 45 out of 100. People understandably felt warmer about their own team, but they still felt moderate levels of warmth for the other party. Today, people still feel warmly about their own party, but ratings about the other party have dropped. Thus the “warmth gap” has grown larger over time. 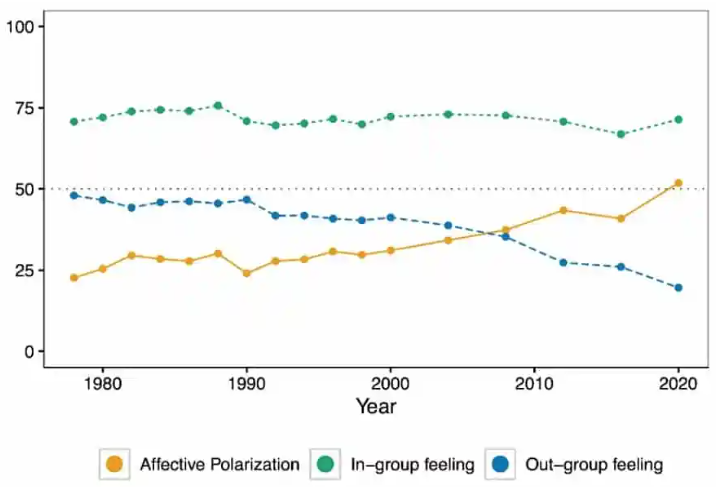 Perhaps ironically, some polarization can be civically beneficial. Indeed, in the 1950s the American Political Science Association was worried about excessive consensus in American politics. It called on the Democratic and Republican parties to more clearly distinguish themselves from each other: “Alternatives between the parties are defined so badly,” the organization wrote, “that it is often difficult to determine what the election has decided even in broadest terms.” In other words, voters have a hard time engaging in politics if they cannot easily differentiate one party from another. Political scientists consistently uncover evidence that voters are more likely to participate when they have a more clear understanding of each party.

Alternatively, many argue polarization has reached worrisome levels. Polarization has undoubtedly become a hallmark of modern American electoral politics. Voters are often motivated more by feelings of antipathy toward members of political outgroups than by concerns about the material consequences of policies proposed by political candidates or elected officials. Politically moderate individuals are vanishing from our national legislature as parties grow increasingly ideologically homogeneous. These developments not only affect who runs for political office but the policies that come out of Washington. Debates over the nature as well as normative consequences of polarization will likely continue for many years to come. To promote thoughtful discussion, it is important to bear in mind that polarization comes in multiple forms and can work differently across different groups.