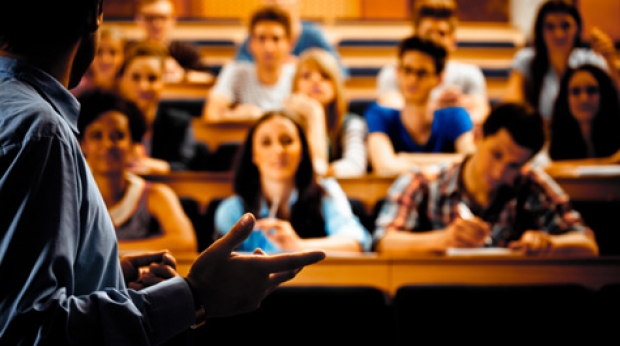 Editor's Note: At AllSides, we have several educational programs that expose students to different ideas because we view diversity of thought as an integral part of the educational experience. This blog post explores the pros and cons of the current higher ed system and how, overall, students could benefit from increased exposure to academic ideals that fall outside of their filter bubbles.

Higher education in America reflects the culmination to date of human knowledge and development. It also is enacting a startling immaturity, even as it is laying the groundwork for the most powerful and positive transformation of human capacity and global civilization since the emergence of the Enlightenment over 300 years ago. If one is to understand these seemingly contradictory dynamics as well as other paradoxes related to the cultural clashes between higher education and much of the rest of society, a quick overview of the developmental issues at play can be very helpful.

The leading edge of human development which has achieved a critical mass over the last 50 years is the first of two related stages which reflect “context awareness1”, and which comprises perhaps up to 25% of the adult population in developed countries. The first and second stages of context awareness correspond to stages four and five of leadership maturity described in my last post. The descriptor “context aware” is used because in this range of development, one becomes aware for the first time of how we all exist in endless contexts in an interconnected local/global environment, and that we are highly impacted by those contextual realities.  Because those with context awareness experience such an increased plurality of perspectives, people with a developmental center of gravity at the first stage of context awareness are often referred to as “pluralists”. Being at the cusp of human development, it is not surprising that pluralists and pluralist informed culture are more dominate in higher education in America than perhaps in any other sector of society.

Pluralists tend to notice that there are many unexamined assumptions in most people’s thinking, in ways that most other people do not.  So, many pluralists in higher education become experts at deconstructing the knowledge and narratives of others - the hallmark of postmodernism – but those at this first and immature stage of context awareness usually do not yet have the capacity to reconstruct much out of the resulting chaos. This advance in the emergence of humanity resulting in less coherence, is a primary paradox which pluralists frequently exhibit, and which is reflected in our society and especially in higher education.

Other paradoxes which pluralists often reflect and which are rife in higher education are: They tend to be extremely inclusive and collaborative in their expressions, but, they also tend to patronize and often even resent those who are not pluralists or the highly marginalized. The targets of such attitudes specifically include those who identify as being traditional or modern in orientation, which comprise the large majority of the adult population. Even as pluralists are highly sensitive to even the “micro-aggressions” of others against themselves and the highly marginalized, they tend to be insensitive to and often condescending toward those who hold different values and outlooks than their own - a now all too common “politically correct” phenomenon in the American academy. Pluralist scholarship has uncovered the previously hidden power realities underlying many societal hierarchies, and they thus tend to condemn and try to delegitimize all hierarchies including value hierarchies, even denying the emergent hierarchies of individual and collective human development at which they are near the top. This situation leads to a relativism which can easily slide into nihilism.

Another important factor is that we all have multiple lines of development, and moral and interpersonal lines tend to emerge more slowly than the cognitive line which has become context aware. Hence we often see distinctly immature behavior from students and even some faculty and administrators with pluralist sensibilities who feel impelled to repress values or points of view other than their own. Post-modern disapproval of others by those who are morally immature can even turn into aggression toward those with non-pluralist views. Hence self-righteous shouting down and even violent actions toward conservative speakers on American campuses is not uncommon.  In addition it is likely that many of the student aggressors are not yet cognitively pluralist in capacity but take on the role of being the shock troops of a pluralist ideology they interpret from the higher education community from their own less discriminating stages of development.

Such extreme political correctness in the academy tends to repress the traditional and highly valuable role of higher education of exposing students to viewpoints other than the pluralist mandated ones (as noble as they mostly are), and of expecting students to learn how to deal competently with a broad range of perspectives.  In the context of this hypersensitivity/aggression the post modern enforcers are admirably often opposed to racist, homophobic, ultra-nationalistic and other discriminatory and dangerous points of view, but through their own immature behavior they undermine the institutions they want to protect and ironically legitimize some of the most objectional groups they intend to destroy, such as white supremacists.  Often even faculty are silenced by threats and intimidation from students and sometimes even pluralist leaders in their own institutions from expressing “unacceptable” opinions or even wanting to defend the importance of having open forums in institutions of higher education.

The second stage of context awareness, often called “integral”, substantially eliminates these paradoxes and contradictions of the first stage of context awareness.  Integrally informed people instinctively connect with the full range of humanity.  They do this as they tend to honor everyone as they are, even as they create conditions to weave together solutions which work for everyone, while privileging more mature perspectives such as being world centric, inclusive and collaborative. They tend to be able to reestablish and reintegrate at a higher level the Good the True and the Beautiful, the classic realms of the Enlightenment and higher education, which post modernism has to some extent deconstructed and left in shambles. As such we are on the verge of revolutionary advances in many fields of knowledge, which could create the conditions for overcoming the increasing global instability and unsustainability.

Many institutions of higher education are currently somewhat paralyzed by not knowing how to honor and inculcate the most mature values of civilization and at the same time allow on campus expressions even of discrimination and hate as required by the standards of the First Amendment.  Yet integral sensibilities encourage collective learning through listening and empathizing and in that context seeing the importance for instance of endlessly expanding one’s scope of caring awareness and compassion – even for those whose opinions seem objectionable. The result is the development of more mutual understanding and over time creating greater clarity for everyone about how harmful discriminatory and unscientific positions are.

These integral dynamics are already at work in many settings in higher education.  If there is a greater percentage of pluralists in higher education than any other sector, there are also more people and leaders with integral capacities and pluralists leaning into integral sensibilities - and that is increasing all the time. However, we are likely many years away from those with integral capacities achieving a critical mass so that greater maturity and coherence fully takes hold in much of higher education let alone in society. It is so ironic that the first, pluralist stage of context awareness as a step in human growth and emergence creates so much chaos and institutional deterioration in higher education and in society generally even as it lays the groundwork for an unprecedented positive transformation of leadership, culture and institutions. If America and the world can keep from self-destructing in the meantime, there is every reason to believe that we will see American higher education, once again becoming more fully the leading light for human and global flourishing and lead the world into an integrally informed renaissance.

It is important now to encourage where we can, integrally informed research, scholarship, teaching, programs and mentoring in the academy, especially those which have an impact both on and off campus, promoting the highest human values such as compassion, inclusion, social justice and sustainability, well integrated with honoring freedom of conscience and expression.  One of the best examples of this in America is the Lowell Bennion Community Service Center at the University of Utah, a widely recognized national best practices center2. The Bennion Center interfaces with all departments in the University to encourage community engaged academic programs. It successfully attracts the full diversity of students at the University, and promotes patterns of life long community engagement and leadership both locally and globally. The Center engages effectively with the community and state in which the University is located with virtually no controversy or pushback. It is supported by liberals and conservatives, and by those who are highly marginalized, traditional and modern, as well as post modern.

Here at AllSides, we encourage everyone to be aware of their own biases (as no person or news channel is unbiased), to become informed about other points of view, and to interact with mutual respect and civility - prerequisites for a healthy democratic republic. Living Room Conversations, one of our primary partners, sets forth an elegantly simple model with just a few guidelines which enable any small group to come together to have rich and respectful conversation regarding virtually any difficult topic. Together, we hope to provide an unmatched educational and practical resource for all of us – including those in higher education - to learn how to participate thoughtfully and effectively in democracy and life and to help realize a healthier and more mature democracy in the coming decades.