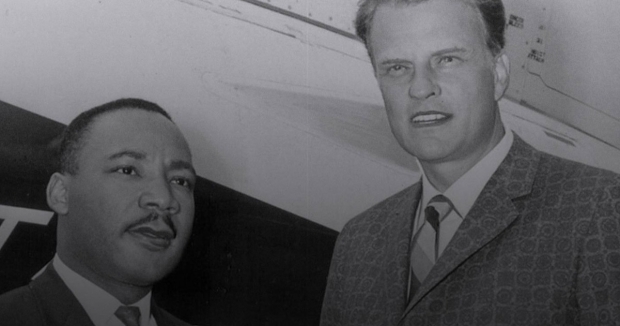 “Well I don’t know what will happen now, we’ve got some difficult days ahead…” -- The Reverend Dr. Martin Luther King, Jr. He would be assassinated the next day.

At a time when we barely see humanity in those we disagree with, it almost takes your breath away that The Rev. Dr. Martin Luther King and The Rev. Dr. Billy Graham were actually friends.

It's our present-day context, though, that has changed the shape of what we expect of people and leaves us so bewildered by even the possibility this could have been true. Across so many years, back when these two were young men - even when the boiling tumult and prejudices of the time were measured in units so very unimaginable to us now - there was at least a fleeting sense that somehow we were still in this together.

Depending on who you listen to, Graham might have actually put up the bail money on an occasion or two for King.

Back then strange bedfellows existed as societal changes pulled and pushed rapidly against each other - where your friend could become a foe and back to a friend again in shifting alliances. Among other things, these fluctuations seemed to at least give quarter to the possibility that none of us is either all the way "good" or all the way "evil," but sitting squarely in the in-between.

There are signs that these friends had more in common than the ministry and a southern upbringing - Graham was known for integrating crowds at his rallies, "sometimes literally moving the ropes meant to divide white and black attendees." According to his biographer, Graham's sermons address racism outright, “There is no excuse, ever, for bigotry and intolerance and prejudice,” and “we are to love as God loves us.”

“Jesus was not a white man; He was not a black man. He came from that part of the world that touches Africa and Asia and Europe. Christianity is not a white man’s religion, and don’t let anybody ever tell you that it’s white or black. Christ belongs to all people; He belongs to the whole world.” -- The Reverend Billy Graham

It's important not to paper over what were likely deep and real differences between these men, else we lose touch with the possibility that we can cope with our own deep disagreements.

Graham declined to participate with King in the March on Washington, and some civil rights leaders suggest Graham may have overstated his agreement with King, who of course repeatedly urged that white pastors do more to publicly take a stand for racial justice - most famously and powerfully making that case in his historic Letter from Birmingham Jail.

When pressed, Graham admitted he’d default to social norms of a given place where he held his rallies, so he wasn't always pushing the racial boundaries. And his ministry focused less on political issues than on sharing the gospel broadly. One can only imagine that King felt quite alone relative to many others who preached a message less focused on the racial divisions that were roiling the country at the time.

“Had it not been for the ministry of my good friend Dr. Billy Graham, my work in the civil rights movement would not have been as successful as it has been.” -- The Reverend Dr. Martin Luther King

Graham wrote about King: "I had known Martin Luther King, Jr., for several years. His father, who was called Big Mike, called him Little Mike. He asked me to call him just plain Mike. … While in Rio [for the Baptist World Alliance], I gave a dinner … in honor of Mike, and I invited Southern Baptist leaders from the United States to come. I wanted to build a bridge between blacks and whites in our own South, and this seemed like a good opportunity to move toward that goal. Our friendly relationship with Mike made the point with my Baptist friends."

In 1957, King prayed at Madison Square Garden as part of the long-running Billy Graham Crusade:"And in these days of emotional tension—when the problems of the world are gigantic in extent and chaotic in detail—give us penetrating vision, broad understanding, power of endurance, and abiding faith, and save us from the paralysis of crippling fear. And O God, we ask Thee to help us to work with renewed vigor for a warless world and for a brotherhood that transcends race or color."

King was just 28 years old when he preached those words, Graham was 38. King would not live to see his 40th birthday before being gunned down by an assassin. Graham died in 2018, just short of his 100th birthday. Some have claimed that King's death signaled the "end of civility" for the civil-rights movement — we can't help but think King himself would lament such a turn.

Graham would live another half a century past when King spoke this challenge: "All we're saying to America is be true to what you're saying on paper."

It's impossible to make an argument that Graham took up King's mantle in any demonstrable way the rest of his very long life. And yet, there — at that time so long ago — was this white man, standing beside and speaking up next to this black man.

The arc of the universe can't have not bent just a little.