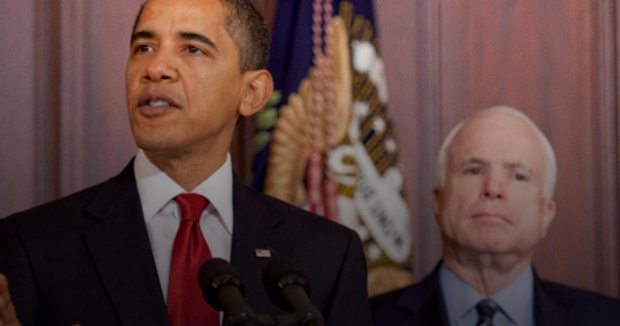 “Tomorrow we’ll be back at it — but tonight, Senator, job well done.” — McCain congratulating Obama on being first black nominee

It's a stretch to call political competitors John McCain and Barack Obama "friends."

They had fundamentally different views of what makes for good public policy, so theirs was a hard fought campaign — and as the old saying goes, "politics ain't beanbag."

Nonetheless, there are moments where both men have offered a guiding light for what it looks like to humanize the political foes we clash with, a fundamentally American innovation that academics refer to as "mutual toleration" — the idea that competing political parties accept each other as legitimate rivals and uneasy partners in a functional democracy.

In their book, "How Democracies Die," Steven Levitsky and Daniel Ziblatt describe the high stakes: "norms of toleration and restraint served as the soft guardrails of American democracy for the 20th century, helping it avoid the kind of partisan fight to the death that has destroyed democracies elsewhere in the world, including Europe in the 1930's and South American in the 1960's."

Senator McCain and President Obama modeled another way forward in their own heated campaign. In response to a woman who accused then-candidate Obama of being an “Arab,” Senator McCain took back the microphone from her and said, “No, ma’am, he’s a decent family man. A citizen I happen to have disagreements with on fundamental issues.” Check out that moment in Business Insider telling their story.

In another moment during the same town hall, Senator McCain told another voter who accused Obama of “consorting with domestic terrorists. McCain's response was met by boos (watch that moment here).

"He is a decent person and someone you don't have to be scared about being president of the United States." -- McCain on Obama in the midst of a heated, difficult presidential campaign

Despite the brutal rivalry between these two men for the most powerful office on earth, McCain’s bravery planted seeds of mutual respect that were occasionally evident through the coming years, despite sincere moments of deep criticism by McCain of the direction that President Obama took on some policies.

When McCain received a devastating cancer diagnosis, Obama shared his admiration for him. “Cancer doesn’t know what it’s up against.”

At McCain's funeral, Obama reflected on how McCain had defended him, in a eulogy for his rival invited by McCain himself.

As President Obama delivered it, these two fierce rivals were once again partners in reminding Americans just what this experiment can be at its very best. Over the years there were rare moments of agreement, but their story — and ours — is really mostly about the capacity to disagree. That’s both the hard and the extraordinary part of this undertaking of a government of, by and for the people.

Respect + Rebellion stories are written by colleagues (and now real-life friends) Dr. Jacob Hess (right) and Liz Joyner (center-left). Jacob is the author of "You're Not as Crazy as I Thought (But You're Still Wrong) Conversations between a Devoted Conservative and a Die-Hard Liberal" and editor of Public Square Magazine. Liz is the Founder & President of The Village Square, a unique community-based model to heal the political divide.