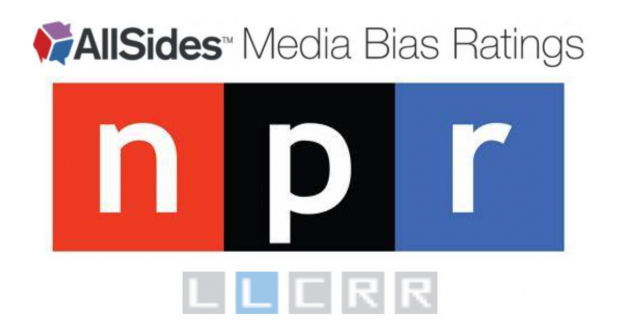 Important Note: This media bias rating is only for NPR's online, written news content. It does not reflect the bias of NPR radio content.

People from across the political spectrum – people who identified as Left, Lean Left, Center, Lean Right, or Right – rated the media bias of NPR (Online News). On a scale of -9 to +9 with 0 representing Center, respondents to the survey on average rated the outlet as -2.77, putting it in the Lean Left category, and close to Left.

When normalized, 71% of respondents rated NPR as left of center and 9% rated NPR as right of center. To view a full breakdown of results, visit the NPR (Online News) source page.

RELATED: How people rated the bias of Insider, Newsweek, Newsmax, and Washington Examiner

Over the years, AllSides frequently received feedback from our community that our Center rating for NPR was incorrect; however, we believed most of this feedback was due to confusion from folks who thought we were rating NPR’s radio content, which differed from online content. (AllSides doesn’t rate radio or broadcast content for most outlets). AllSides previously conducted Blind Bias Surveys on NPR that returned a result right between Center and Lean Left; Editorial Reviews also continually put NPR online news just on the border of Center and Lean Left. AllSides even discussed if we should create a Center-Left category for sources like this. The latest survey results and subsequent independent review make us confident in NPR’s new Lean Left rating.

NPR’s media bias rating is featured on the AllSides Media Bias Chart™, which has been updated to reflect this change, as well as changes to Newsmax and Insider’s ratings.

AllSides is able to continue its media bias research thanks to the support of Sustaining Members. Interested in funding future research? Become a Sustaining Member or make a one-time contribution to support our work.