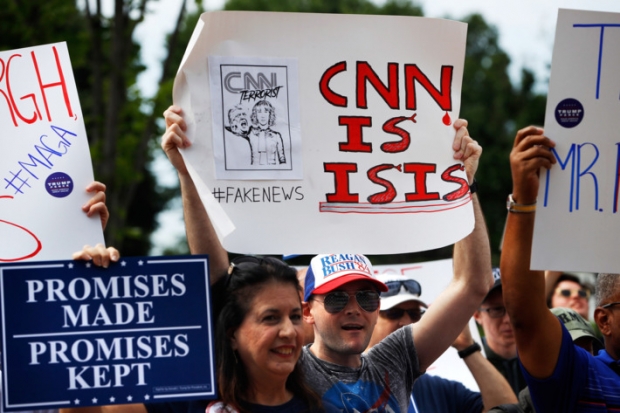 According to some, America is facing a new terrorist threat: the media.

“CNN IS ISIS,” the sign reads. It’s a stunning accusation — particularly when considering that the media are expected to be a stronghold in American society, charged with holding government accountable. Is the nation’s watchdog now a pit bull?

Perhaps it’s a hyperbolic comparison, but news organizations have certainly engendered a great deal of mistrust. Case and point — a new poll from YouGov/The Economist shows that 55 percent of Republicans believe the government should impose fines on media outlets for “publishing or broadcasting stories that are biased or inaccurate.” A staggering 45 percent advocate for more intervention, asserting that the judiciary should have the right to shut down biased news organizations altogether.

In layman’s terms, it means that a sizable faction of the country wants to criminalize media bias. The implications for free speech are alarming, and, as New York Magazine points out, drawing a distinct line in the sand seems like a near impossible feat. “Bias” is inherently subjective, so how would we decide what's unacceptable?

If we take the survey at face value — “stories that are biased” — then the vast majority of media outlets (liberal, conservative, and everything in between) would go under, as all publications and TV news programs contain at least some element of biased reporting. The GOP’s response primarily serves as a rebuke against the mainstream media, which certainly skews left. But if laws were enacted to police the media’s speech, they surely could not discriminate based on political party. The gaggle of conservative news outlets available for consumption — Fox, Washington Times, Townhall, and others — would also fall victim to censorship.

Journalists are supposed to be the foremost advocates for free speech — if the Founding Fathers had specified a free speech mascot in the Constitution, reporters would have been first in line. With the free press comes an abundant exchange of ideas where people of all persuasions can join in conversation with each other. However, the media publish a great deal of misleading stories, and polls like this show that many people are fed up, to put it lightly. Instead of fostering an intellectual marketplace to help the public make more informed decisions, right and left-wing news outlets are doing just the opposite — further cementing filter bubbles. But should we make that illegal?