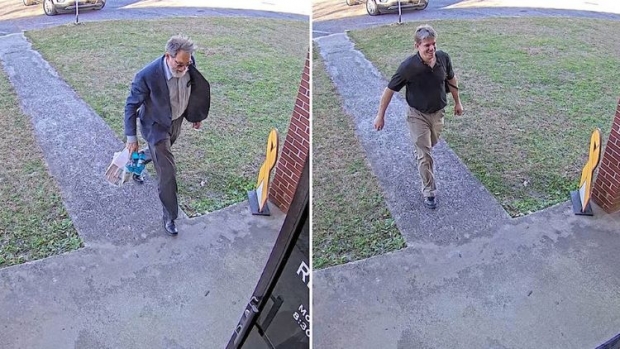 Surveillance footage emerged this week of the former GOP chairwoman for Coffee County, Georgia, escorting members of the tech firm SullivanStrickler into an elections office the same day as an alleged breach that is under investigation by state authorities.

The story was covered prominently on one side of the political spectrum but not the other, leading to several examples of bias by omission, spin, and story choice.

What the Left Did
What the Right Did

Coffee County, Georgia has been central to the unsubstantiated claims of decisive election fraud advanced by Donald Trump and his allies after the 2020 election. According to CNN (Left bias), it was one of two counties named in drafts of executive orders written by Donald Trump to the Department of Defense in an attempt to seize voting machines to investigate claims of voter fraud.

In August, the Washington Post (Lean Left) reported that two employees of forensic firm SullivanStrickler, Scott Hall and Paul Maggio, entered the Coffee County election office on January 7, 2021, and copied data from the voting systems. They reportedly did so under the direction of Trump lawyer Sidney Powell.

Cathy Latham is Coffee County’s former GOP Chairwoman, and, as pointed out by many left-rated outlets, signed on to a set of false electors in Georgia who claimed Donald Trump won the election. At the time of the original Washington Post report, Latham said she was not in the office that day and did not “participate personally in anything that the elections board and/or its employee … may have decided to do under their own authority (or at least their perceived authority) with the ballots,” according to her lawyer.

Recently, however, the Post reported on surveillance footage showing Latham escorting the SullivanStickler employees into the office. The video also shows that employees of Cyber Ninjas, Jeffrey Lenberg and Doug Logan, visited the election office multiple times after SullivanStrickler. Cyber Ninjas is widely known for their audit of the Arizona election results in 2020.

This story has been covered mainly by left-rated outlets, which often displayed spin in their reporting. Conversely, the lack of coverage from right-rated news sources amounts to bias by story choice and omission.

What the Left is Saying

For some, choosing to highlight Latham as a “fake elector” in the headline displays the spin of some left-rated outlets, which immediately imply that she is not credible before the readers have looked at the story in its entirety.

CNN’s frequently-cited piece dedicates significant space in the article to covering Latham’s conflicting answers regarding her involvement in the data breaches. She said she was not present at the office that day before saying (via comment from her lawyer) that “regardless of whether she correctly remembers the details of what time she spent there on January 7, it doesn’t change the fact that she had no authority to do any of this and was not personally involved in whatever was done.”

The CNN article also calls the breach “evidence of a coordinated plot” in a subheading, however, in the body of the article it says “state investigators in Georgia are examining the possibility of a broader plot.” The article goes on to say, “Since then, evidence has emerged linking several people who gained access to voting systems in Antrim County to the breach in Coffee County – including Powell and Maggio.” This is an unsubstantiated claim because the article does not mention how the two cases are connected through any explanation or citation. The end of the article does state “Fulton County District Attorney Fani Willis specifically notes that Powell can likely provide information about the breach in Coffee County as well as similar efforts in Michigan and Nevada related to voting machines,” but does not mention the nature of the information he could provide.

Overall, CNN’s word choice conveys bias toward the theory that election breaches were a coordinated effort by Trump's allies to interfere in election procedures.

What the Right is Saying

A few outlets such as the Washington Times (Lean Right) and the Boston Herald (Lean Right) republished the Associated Press’s (Lean Left) coverage of the story.

The only large right-rated outlets that offered original reporting on the story were the Washington Examiner (Lean Right) and the Daily Mail (Right bias).

Similarly to CNN, the Washington Examiner says “The two men [Logan and Lenberg] are also under investigation for similar breaches of voting systems in Michigan,” but does not give any details or citation of where they got that information. The article also includes several quotes from a SullivanStrickler spokesperson,  who says that SullivanStrickler “has recently been accused of being part of a team that illegally 'breached' servers or electronic equipment used to conduct the 2020 election. This accusation is categorically false. The firm’s work is politically agnostic."

The Washington Examiner piece omits any commentary or analysis about Latham’s role in the footage and focuses solely on the men accused of the breach, in what could be perceived as a case of bias by omission.

The political right has offered much less reporting and commentary on these accusations of right-wing election manipulation in 2020. But it’s important to get a full picture of the credibility of the claims by looking at both sides whenever possible. Use AllSides Balanced Search to see news and opinions from sources across the political spectrum.

This is just one of many recent examples of media bias appearing in major stories. See our other recent media bias breakdowns of the FBI Agent Who Retired After Accusations of Political Bias During the Hunter Biden Laptop Investigation and Dr. Fauci’s Retirement.