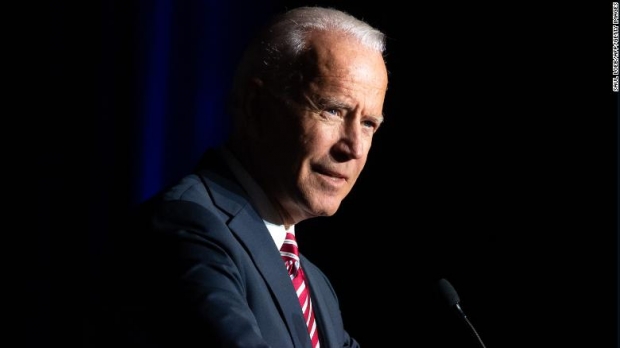 Joe Biden announced that he will seek the 2020 Democratic presidential nomination, emerging as a potential frontrunner in a crowded field of hopefuls.
Some praised the former vice president as the best option to beat President Trump, while others criticized his record and his behavior toward women.
Check out some other big stories this week: Easter Sunday Bombing Leaves Hundreds Dead, Democrats Issue Subpoena for Full Mueller Report, and IRS Misses Congressional Deadline To Turn Over Trump Tax Returns.
From the Blog: Easter Worshippers or Christians? In the aftermath of the horrific Easter Sunday bombings in Sri Lanka that killed 253 people, some journalists accused Democrats of being biased against Christians and downplaying their status as a victimized group. AllSides unravels the bias claims.
We're hiring! AllSides is looking for a data journalist and analytics guru. Learn more and apply here.

What made Joe Biden's video stand out
CNN Opinion

"Joe Biden's presidential announcement video on Thursday clocked in at just over three minutes and did something urgently needed in the 2020 race: put President Donald Trump's history of hate front and center. By doing so, Biden acknowledged the pain -- the real pain -- that so many marginalized communities have felt since Trump launched his campaign in June 2015 and demonized us."

"Biden said he would change, becoming more “mindful” of people’s personal space. But he also promised not to change too much. “I’ll always believe governing — quite frankly, life, for that matter — is about connecting with people,” he said."

"With all his blarney and sometimes tedious speechifying, he's obviously, uncontestably a decent person. He would be far from an ideal president, let alone a Democratic candidate. Maybe in one of those blessed miracles of American democracy that produced our greatest presidents, someone else will emerge who's younger, smarter, more representative of a diverse electorate.But right now, Biden looks most like the person who could beat Trump. And that’s Job One."

"The man from Delaware can be a gaffe machine, and the early evidence is that he will be willing to renounce every good thing he has done in 36 years in the U.S. Senate and 8 in the White House to make himself acceptable to the party, once defined by the politically incorrect courage of Jefferson, Jackson and FDR, and now renounces itself. Joe has a strong resume and more experience than any other Democrat. But who needs experience and a strong resume? Watching the Geezer Primary may be fun, but the winner is likely to be a loser."

"The former vice president is the only candidate in the race to have voted in favor of the Iraq war. When he was a senator from Delaware, Biden supported most every tough-on-crime policy you can imagine, from mandatory minimums to civil asset forfeiture to an expanded death penalty. He was one of the chief architects of the 1994 crime bill that helped usher in an era of mass incarceration.”

"But what about his accomplishments? Biden has historically positioned himself as a foreign-policy expert. But his record of judgment includes the very thing that disqualified Hillary Clinton for Democratic voters in 2008: a vote in support of the Iraq War. And despite Biden’s experience and insight on foreign policy, his proposed solution for Iraq was in some ways the one later attempted by ISIS, cleaving it into pieces along religious lines. What this would have meant for Syria, for Saudi Arabia, and for the resultant states, which would not all have equal access to Iraq’s resource wealth, he never quite speculated at the time."

"Mr. Biden’s entry means the Democratic contest is largely set, putting the former vice president into a scramble for the nomination against a diverse field of candidates who have been competing and raising money for months. The contest already is revolving around who is most likely to unseat Mr. Trump, with primary voters debating how far left a winning nominee might go.'"

Joe Biden uses Charlottesville as motivation for 2020 run: 'We are in the battle for the soul of this nation'
USA TODAY

"In his announcement, Biden went after President Donald Trump and the statements he made after violent clashes between activists and white supremacists in Charlottesville, Virginia, in 2017.In the wake of the demonstrations, which killed one person, Trump said there were fine people on 'both sides,' a remark that drew wide condemnation"

"Mr Biden, asked by reporters in Delaware why Mr Obama had not endorsed him, replied: 'I asked President Obama not to endorse and he doesn't want to… whoever wins this nomination should win it on their own merits.' President Trump tweeted: 'Welcome to the race Sleepy Joe. I only hope you have the intelligence, long in doubt, to wage a successful primary campaign.'"