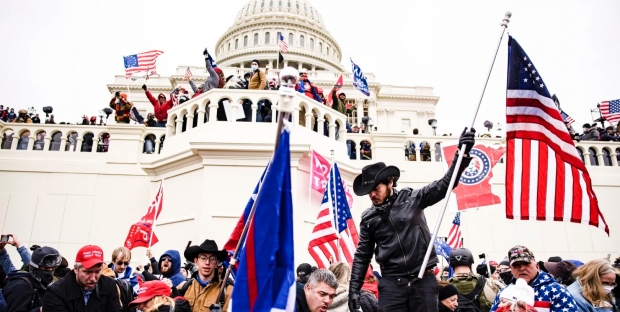 The hearing featured new witness testimonies and never-before-seen footage in an attempt to uncover the "culmination of an attempted coup" by former President Donald Trump to overturn the results of the 2020 presidential election.

The committee consists of seven Democrats and two Republicans — Liz Cheney (Wyo.) and Adam Kinzinger (Ill.). Both oppose Trump and have been the subject of criticism from other GOP lawmakers for their role on the committee; reports across the spectrum suggest that Cheney may lose her Senate reelection bid because of it.

While the Democrats and most left- and center-rated news sources frame the hearing as significant and deserving of primetime coverage, many Republicans and news sources frame it more as a political move by the House Democratic majority to make this a bigger issue before the midterm elections and distract from other issues. The left focused especially on Trump's role in the riot and the possibility that he commited a crime.

Voices on both sides agree that the hearings may not have much of an effect on public opinion as some anticipate, but for different reasons. Some on the left say the hearing is unlikely to sway Republicans who already doubt the committee's legitimacy. Some on the right say Americans have bigger things to worry about, such as crime, baby formula and inflation.

"Citing congressional laws pertaining to committee staff, the lawmakers noted that a letter is required requesting approval of the Committee on House Administration regarding Goldston’s hiring, along with a signed contract agreement and resume. Under that same law, Goldston would be unable to commence work for the committee until the contract has been approved by the Committee on House Administration."

"The hearings could better be understood as a 90-minute political ad, slickly produced by a former top ABC executive. Their objective is unabashedly partisan: Break the spell of soaring prices and woke-progressive failure that has Democrats careening into a midterm rout that would cost them control of Congress by refocusing voters on Donald Trump and the Capitol riot. Good luck with that."

How to watch the Jan. 6 committee hearing: Most networks, except Fox News, will broadcast it

"The first hearing of the House Jan. 6 committee happens Thursday, and while you can watch on most news outlets, Fox News isn't one of them. Fox News Channel's prime-time programs will "cover the hearings as warrants," and at 11 p.m., the network announced Monday. The network will instead carry the coverage on its Fox Business channel, as well as Fox Nation and its website."

Jan. 6 panel holds prime-time televised hearing in a bid to imprint the implications of this national nightmare

"The House committee set out to expose the truth about Trump's broad plot to tarnish the 2020 election with false claims of voter fraud. House Republicans are so determined to prevent the American people from learning that truth that they are working to discredit the committee with a public relations assault. On Thursday and in weeks of subsequent hearings the panel is under fierce pressure to establish the depth of Trump's apparent conspiracy."

What does a Jan. 6 hearing victory look like for Democrats?

"A number of lawmakers said they want the open proceedings, which begin in prime time on Thursday, to provide a high-stakes history lesson of sorts, revealing not only what happened on Jan. 6, 2021, when a pro-Trump mob tried to block the peaceful transfer of power, but why the threat to democracy remains real."