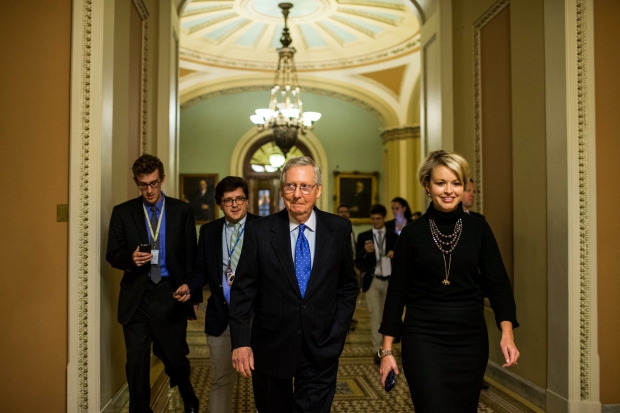 The vote on the GOP's proposed tax bill could come as early as today. There is a whole lot of information out there about what the bill supposedly will and won't do for the American people. Take a look at our snippets to get a clearer picture of how the Right, Left and Center portray it.
Other news from AllSides:
Snippets from the Center
How the Senate tax bill affects rich and poor, in three charts
PBS Newshour
"The CBO report, which came out Sunday, was unusual because it does not just look at the Senate bill’s impact on people’s taxes. It also analyzes spending cuts the GOP tax plan would trigger, and how those cuts would affect the rich and poor.
As you will see, our analysis of the new data shows the Senate Republicans’ bill would move resources away from lower-income Americans and toward upper and upper-middle class Americans.
...
For instance, Americans making $10,000 to $20,000 would see barely any change — a loss worth just 0.14 percent of their income next year. But Americans making $500,000 to $1 million next year would see a net benefit that’s worth nearly 3 percent of their income."
Snippets from the Left
How the Republican tax bill benefits the rich, according to government analysis
Washington Post
"Another way to look at the tax proposals is how it affects federal revenue. Overall, the CBO estimates that the tax proposal will increase the federal budget deficit by $1.4 trillion over the next 10 years, a function of decreased income from taxes.
...
The countervailing argument is that the rich pay more in taxes and, as such, reducing taxes proportionately means reducing taxes on the wealthy more. This is the “paying for beers” argument, made by White House press secretary Sarah Huckabee Sanders last month. That, though, is a decision that the people crafting the legislation are making: keeping corporate tax cuts and other measures benefiting the wealthy indefinitely while other income tax cuts are phased out. The net result, according to nonpartisan government analysis, is a larger benefit for wealthier Americans, over both the short and long term."
Snippets from the Right
Four Misleading Arguments against the Tax-Reform Bills
National Review
"Unfortunately, rather than offer these nuanced but justifiable criticisms, many critics are shouting outrageous and bogus claims. Here are four of the most popular.:
Discover more on this topic on AllSides.
News, Story Of The Week, GOP, Senate, Taxes, Tax Cuts