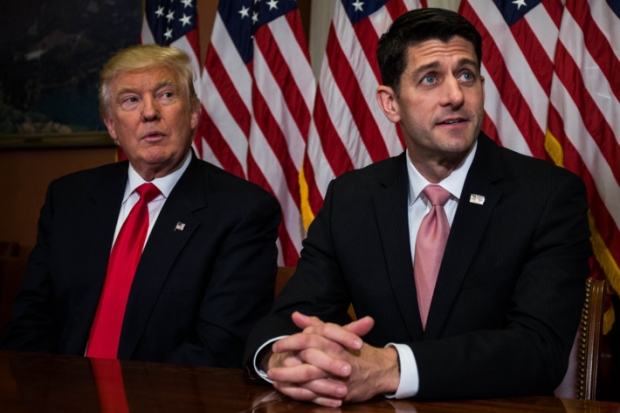 The vote on the AHCA was supposed to happen today, the 7th anniversary of the ACA, but it got delayed. The plan to repeal and replace Obamacare has been heavily debated since it was released. The Republicans in the House could only afford to lose 21 votes and it looked as though they would, thus Speaker Ryan delayed the vote. In response, President Trump said that if the vote doesn't happen tomorrow, Friday, that the Affordable Care Act (Obamacare) will be left in place and he will move on to other topics.
See other news featured by AllSides such as Attack at British Parliament, More on London Attack, Trump Heads to the Hill and the latest AllSides News.
Snippets from the Left
At Trump’s urging, House Republicans to vote on health-care bill Friday even as they still whip for votes
Washington Post
"Ryan had intended to bring up his plan for a vote on Thursday. But criticism mainly from conservatives caused that strategy to unravel after Freedom Caucus members rejected Trump’s offer to strip a key set of mandates from the nation’s current health-care law.
By evening, Republicans had crafted a proposed change to the measure eliminating the law’s “essential benefits” that insurers must offer under the Affordable Care Act, including mental-health treatment, wellness visits, and maternity and newborn care.
...
Meanwhile, a new analysis by the Congressional Budget Office released Thursday evening showed that changes House leaders made to the bill on Monday do not alter a projection that 24 million more Americans would be uninsured by 2026 under the bill. In addition, the updated bill would cut the deficit by $150 billion over the next decade — nearly $200 billion less than the earlier version of the legislation."
Snippets from the Center
Trump threatens to leave ObamaCare in place if repeal bill fails
The Hill
"President Trump warned House Republicans on Thursday that he will leave ObamaCare in place unless they approve legislation to repeal and replace it.
Trump officials meeting with the House GOP conference said Trump is done negotiating over the legislation, which was set to come up for a vote Thursday but was delayed.
Budget Director Mick Mulvaney, a former member of the House Freedom Caucus that has been negotiating with Trump, told the GOP conference that Trump wants a vote on Friday during a dramatic closed-door meeting, according to a GOP source in the room.
If the vote fails, Trump will move on to other priorities and ObamaCare will stay as the law of the land, Mulvaney said. The developments set up a likely vote on the measure Friday afternoon."
Snippets from the Right
House Scraps Vote On Health Care Bill, Failed To Get The Votes
Townhall
"The bill had a rocky start from the beginning, with Medicaid expansion being left intact in the Obamacare replacement legislation. That seemed to poison the well with House conservatives. Yet, go too far on tweaking Medicaid, and then the moderate Republican lawmakers would bolt. When the Congressional Budget Office gave the bill a less than stellar report card, moderates began to break away. Fox News’ Chad Pergram elaborated on this seesaw balancing act between the House Republican leadership, members of the moderate Tuesday Group, which number around 50 members, and the conservative House Freedom Caucus. In short, the votes were not there today. The House GOP could only afford to lose 21 members. By Thursday afternoon, 30-40 members were in the 'no' column."
Discover more on this topic on AllSides.
News, Story Of The Week, Healthcare, Obamacare, Trumpcare