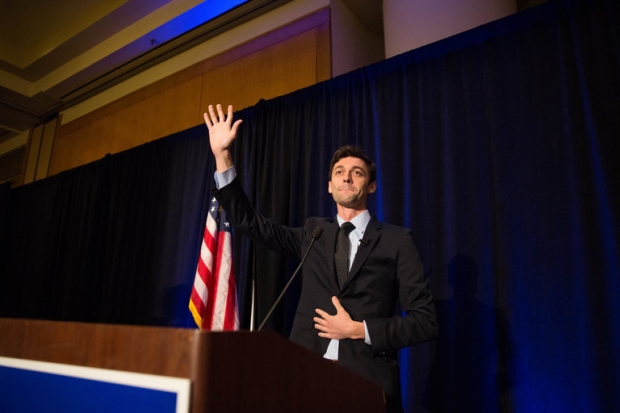 The fight to "flip the 6th" continued this week, with Democrats hoping to put one of their own in a long help Republican congressional seat in Georgia. Jon Ossoff (D) would have needed to win over 50% of the vote on Tuesday to take the seat, but he narrowly missed it with 48.1%, therefore a run-off will take place in June. As the country watched the results flow in Tuesdaynight, Democrats hoped to pull off a victory and the first real referendum against President Trump's policies.
Have you taken the latest Blind Bias Survey yet? Help us keep our source ratings updated by taking this short survey.
See other news featured by AllSides such as Tax Day Protests, O’Reilly Out at Fox, New Bid on Healthcare Reform and the latest AllSides News.
Snippets from the Center
Ossoff falls just short in Georgia special election as GOP gets wakeup call
CNN
"Ossoff received 48.1% of the vote, shy of the 50% he needed to win outright. He and the other top vote-getter -- Republican candidate Karen Handel, who received 19.8% -- will now face off in a runoff election in June, a likely uphill climb for Democrats now that the Republican vote in a reliably GOP district will be consolidated behind one candidate.
The hotly contested race carried major implications as a gauge of the President's popularity -- and Trump himself seemed to grasp the high stakes, playing a direct role in its closing days.
Democrats saw it as an opportunity to drive a wedge between Trump and congressional Republicans fearful that he could drag down the party in the 2018 midterms -- while also delivering a psychic boost to an energized progressive base."
Snippets from the Right
Given record-setting fundraising, did Jon Ossoff underperform?
Washington Examiner
"Jon Ossoff's failure to win the special election in Georgia's 6th Congressional District outright on Tuesday is notable given the remarkable conditions impacting his race.
The amount of money Ossoff has at his disposal was record-shattering.
According to the Washington Post, Ossoff raised '17 times as much as the average candidate in a competitive district.' In the first quarter of 2017, Ossoff's campaign hauled in $8.3 million dollars. For perspective, the highest-earning congressional campaign raised $1.3 million in the third quarter of 2016. The average was $500,000.
...
Compounded with additional factors, these staggering fundraising numbers make Ossoff's share of the vote seem less impressive."
Snippets from the Left
Jon Ossoff and the Future of the Democratic Party
Benjamin Wallace-Wells, The New Yorker
"Ossoff has spent most of his working life on Capitol Hill, as a staffer for the Democratic Congressman Hank Johnson, who represents Georgia’s Fourth District, also in the Atlanta suburbs. Ossoff managed the identity-politics currents of the Democratic Party adeptly. His early campaign literature showed him linking arms, Selma-style, with the civil-rights hero and longtime Congressman John Lewis, of Georgia’s Fifth, whose endorsement he had secured....
Ossoff has a precision most first-time candidates lack. When asked by MSNBC’s Chris Matthews what he made of President Trump bombing Syria, Ossoff said, enunciating his consonants, “Well, I think if U.S. intelligence confirmed that the Syrian military struck civilians with chemical weapons, then a swift, punitive, limited strike was a reasonable response, but any further action would require congressional approval, and we can’t get drawn into the ground there.” It didn’t seem strange at all, once you got past the Han Solo stuff, that Ossoff would be the face of the Democratic Party. He is exactly the kind of figure that the institutional Democratic Party has launched toward office for decades. What did seem strange was that he has become the face of a broader cultural phenomenon: the resistance."
Discover more on this topic on AllSides.
News, Story Of The Week, Georgia, Jon Ossoff, Election