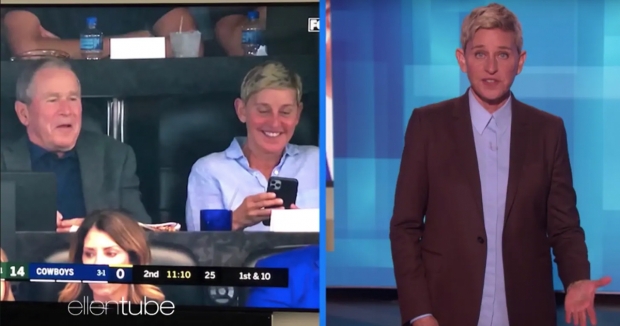 Last week, Ellen DeGeneres was criticized on Twitter after photos of her sitting next to former First Couple George W. and Laura Bush at a Dallas Cowboys game surfaced online. Ellen responded to the criticism in a monologue on her show, saying, "I'm friends with George Bush. In fact, I'm friends with a lot of people who don’t share the same beliefs that I have." She went on to draw a comparison to wearing fur, saying she does not like it, but she's friends with people who do.

There are a few ways to interpret this. On one hand, if you believe that the Iraq War was avoidable or unnecessary, and you blame George W. Bush for the Middle Eastern invasion, then it follows that he has the blood of what may be more than 100,000 people on his hands. That is not something that should be papered over simply because he is no longer in office.

For some of those on the Left, the reasons to condemn Bush go far beyond simply not “sharing the same beliefs” as Ellen. Bush also opposed same-sex marriage, while DeGeneres was one of the first openly lesbian actresses and has been married to her wife, Portia de Rossi, since 2008. Glossing over history by viewing the past with rose-colored goggles won't do us any favors. With this in mind, DeGeneres comparing her feelings about George W. Bush to those of her friends who wear fur is insulting to many. It is not surprising that many were angered and hurt by her response.

On the other hand, what would Ellen and Portia have accomplished by giving George and Laura the cold shoulder? It may have protected their reputation with those on the Left who condemn associating with their political others, but would this have done any good?

Had Ellen and Portia behaved angrily or coldly, two things would have happened: first, the Left would have felt renewed, righteous anger towards George W. Bush, his administration, and the Right as a whole. Second, the Right would have felt renewed, righteous anger towards the Left for being rude, childish, and prone to outrage culture. People on both sides of the spectrum would have taken comfort in their moral high ground and ostracizing their political "enemies.” The division that threatens our democracy would have deepened yet again.

A study from the University of Colorado noted that “people's attitudes become more extreme after they speak with like-minded others.” Placing ourselves into social filter bubbles only makes us more polarized in our beliefs. When we only talk to people who agree, we are much less likely to understand other perspectives.

The high level of political polarization in America is exactly why organizations like AllSides and Living Room Conversations were created — to ensure that we do not become confidently ignorant. AllSides helps readers to pop their information filter bubbles by exposing them to news and information from all sides of the political spectrum; its partner, Living Room Conversations, helps to pop social filter bubbles by facilitating conversations among those who may disagree. This can also be achieved, of course, by sitting next to someone who is different from you at a football game.

When was the last time you were hated or shamed into shifting your perspective? It is not common. Ellen routinely ends her show with the phrase, "Be kind to one another." Being kind to someone does not mean that you endorse all of their actions or beliefs. It means that you can respect their right to think and believe freely, empowering you to interact humanely with them — despite your differing perspectives. Ellen seems to understand that. The rest of America should, too.

Samantha Shireman is the Information Architect at AllSides She has a Lean Left bias.