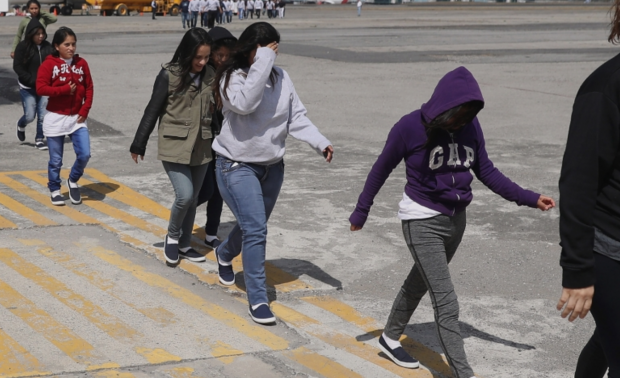 The administration is taking actions to increase arrests and deportations of illegal immigrants, supposedly prioritizing those who break more serious laws. Trump and many of his supporters feel the previous administration was too lax, while others considered President Obama to be the "Deporter in Chief" after reportedly deporting a record 2.5 million people. Trump seemingly wants to meet and exceed that number, calling it a "military operation". People who oppose his policies fear that any illegal immigrant could be marked for expedited removal.
Read AllSides' CEO John Gable's interview with Andrew Brightwell from Online Journalism Blog on bursting bias bubbles.
See other news featured by AllSides such as John McCain on Free Press, Trump Picks McMaster for NSC, End of Transgender Bathroom Rule and the latest AllSides News.
Snippets from the Center
Trump calls deportation push a 'military operation'
The Hill
"President Trump on Thursday called his effort to ramp up deportations a 'military operation' aimed at ridding the U.S. of 'really bad dudes.'
'We’re getting really bad dudes out of this country,' he said at a meeting with manufacturing CEOs. 'And at a rate nobody has ever seen before. And they’re the bad ones. And it’s a military operation.'
Trump is touting his administration’s new immigration enforcement policies, which could result in millions of deportations.
The Department of Homeland Security guidelines vastly increase the number of immigrants who are considered priorities for deportation. They also direct law enforcement agencies to hire thousands of new agents to apprehend people living in the country illegally, with local police and sheriffs’ offices enlisted in the effort."
Snippets from the Right
Treat Illegal Immigration Like What It Is: A Law Enforcement Problem
National Review
"'On one end, everyone knows that it is neither possible nor desirable to deport the entire illegal-immigrant population (estimated at 11 million-plus); on the other, there is strong consensus that serious criminals and those in defiance of deportation orders should be deported forthwith, though we know this is just a minority subset of that population.
...
Since enforcement resources are finite, priority will be given to removing serious criminals in the illegal-immigrant population. But what is a 'serious' crime? The answer to this question, Victor points out, will depend on our view of identity-fraud crimes (and related varieties of document fraud). These are felonies. Because illegal aliens commit them massively, their apologists want us to think of such offenses as 'unserious.' But they are even conceivable that way only when compared to heinous violent crimes; and we know they are not unserious because they are treated quite seriously by the government when committed by American citizens."
Snippets from the Left
Donald Trump Plans to Bypass the Courts to Deport As Many People As Possible
The Intercept
"'This is the broadest, most widespread change I have seen in doing this work for more than two decades,' Lee Gelernt, a veteran immigration attorney and deputy director of the ACLU’s national Immigrants’ Rights Project, told The Intercept. 'After 9/11 we saw some extreme policies, but they were largely confined to particular areas around the relationship between immigration and national security. Here what we’re seeing are those types of policies but also much broader policies just dealing with immigration generally.'
...
The lawyers weren’t alone in raising concerns. Rep. Bennie G. Thompson, ranking member of the House Committee on Homeland Security, said in a statement that the memos show the Trump administration is 'more concerned with attempting to fulfill misguided campaign promises than doing what is best for the safety and security of the country' and 'dead set on creating a massive deportation force and labeling anyone undocumented for expedited removal just to boost deportation numbers.'"
Discover more on this topic on AllSides.
Story Of The Week, News, Deportations, Immigration